Clearly the past week did not go as planned. No Bittman posts appeared here, and no new recipes were made. Until today at lunch.

I don’t get sick very often. When I do, it’s usually a head cold that lasts mayyyyybe three or four days until I get frustrated with it and flood myself with so much liquid that the cold just gets flushed right out of me. This week was different. I don’t know whether this thing that hit me was cold or flu, but it knocked me over, dragged me around for a while, and then pummeled me almost senseless.

My wonderful husband has been nursing me on simple, nutritious dinners and generally keeping me out of the kitchen, which has been a strange experience. But as this morning wound to a close, with husband and dog-daughter out on a walk, I was suddenly struck with a craving for – of all things – Cup’o’noodle soup. You know, the kind in the styrofoam cup with the peel-back paper top, packed with noodles and freeze-dried vegetables and crusty little shrimp? Yeah, I wanted that for the first time in probably ten years. Maybe more.

Of course we don’t have Cup’o’noodle in the house. But we did have frozen turkey broth, made from the carcass of our Thanksgiving turkey. And I had the memory of my friend M.’s suggestion for “garlic tea” as a cold remedy. I went to work in slow, hobbling steps.

I turned the heat up and let this come to a boil, where I left it rolling for about 10 minutes to let the garlic and ginger flavors really permeate the broth.*  Then I added:

I let this simmer away for 10-15 minutes, until the kale was wilted and the grains were cooked.

Then I ate the whole pot. 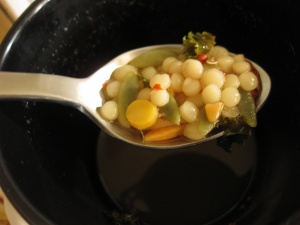 It was delicious. It wasn’t the over-salted, noodle-y guilty-awesome of Cup’o’noodle, but it was comforting and satisfying and spicy and rich and felt healthy. The lemon juice added a necessary brightness, and the grains blend made it filling enough for lunch. The garlic, the ginger and the chili flakes all have their own kind of spiciness, and all were welcome and throat-soothing and tummy-warming.

If you’re not feeling well (or even if you are!), make yourself a pot of this. To bulk it up, add more grains, or sub that out for noodles, or add some pre-cooked shredded chicken or squares of tofu. If you don’t like kale, add some spinach in the last five minutes instead. Using vegetable broth would easily make this vegetarian and vegan, and using tofu or rice noodles instead of the grains blend would easily make this gluten-free.

* At this point, you could strain out the garlic and ginger, and add the vegetables and grains to a clear broth. I didn’t, but then again, I’m the sicko.