Nothing says vacation like fried food.  Of course, for me, nothing says vacation like fried-food-I-didn’t-have-to-fry-myself-that-comes-in-achingly-bad-for-the-environment-but-when-I’m-on-vacation-I-might-not-care-styrofoam-containers. So at the Farmers’ Market near my parents’ home in California’s East Bay Area, I fought with my compunction about collecting a lunch made at an event celebrating freshness and organics and the products of the earth in a container that will last longer than my own body will. Compunction lost.

Because inside that container were two items: a chicken tamale and a spinach and cheese empanada.  I bought them from a stand advertising Panamanian food – the boy and the man in charge webbed within unexplained netting. The tamale was largely unremarkable; steamed in a banana leaf instead of a corn husk, filled generously with a mixture of moist, shredded chicken and kick-less tomato based sauce, I ate it with enjoyment but not gusto. The empanada was a different story.

When my mom and I approached this stand, it was barely 11am. While the tamales had been pre-steamed and just needed to be heated up to be ready to eat, the empanadas did not yet exist in finished form. As I ordered, the older man doing the cooking ambled toward a small outdoor fryer consisting of a coal-black bowl full of questionable oil and turned on the gas. 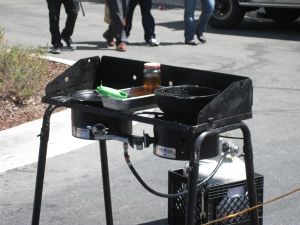 He ambled back to the netted tent and pulled a ball of smooth, elastic dough from under plasticwrap and, easily and lovingly, rolled it into a six or seven inch circle with almost no extra flour (if you’ve read about my troubles with dough, you understand why this amazed and alarmed me). He layered on some spinach and a big chunk of cheese, dribbled egg wash, then casually folded the dough, pressing the edges first with floured fingers and then with the tines of a fork, leaving even indentations all around the outside to seal in the goodness.

As he carried my lunch over to the warming oil, he told us there were two ways to make an empanada: baked or fried. Then he added, “but really, there’s only one way,” and we agreed that fried is always better. Tipping the little pastry into its bath and carefully manipulating its floating orientation with his fingers, he said he likes to fry his empanadas in oil rather than lard, because lard makes the exterior too dark too fast.

My mom was surprised by the time and low temperature this fry required. The oil did not sizzle and leap furiously, but simmered warmly around the edges of the pastry. This was necessary, we were told, because time was needed to thoroughly heat the filling and cook the dough all the way through. The empanada, with help from our new friend’s careful, gloved prods, swam its way around the oil bath into a state of deep golden crispness before extraction and enclosure within baneful Styrofoam.

Too many minutes later, we were home and I was investigating my purchase more personally. The dough, fried so carefully and attentively, parted with a raspy flaky tear between my teeth, quickly revealing moist, almost dense chewiness. The cheese had cooled only slightly and now maintained all the delightful elasticity of a taffy-pull. But it was the pastry I couldn’t get enough of. Because it was stuffed, the central, puffed area containing the spinach and cheese was a slightly different texture than the crisp pressed edges – softer, chewier. The edges, almost completely crisp, still had a slight interior tenderness to squash pleasingly between eager teeth. The closest comparison I can imagine, though I’ve never eaten it, would be fried pie dough.

I dispatched the whole thing in a time embarrassingly less than five minutes. I tried to savor, I really did. But isn’t that just like vacation? No matter what you do, it’s gone too quickly…