I wasn’t expecting that a barbecue sauce would be one of the dozen pourable concoctions I developed this year. Call me a snob but, barbecue sauce? It just seems so… pedestrian. Break out a bottle, squeeze it over some drumsticks, and reach for the wet-naps. 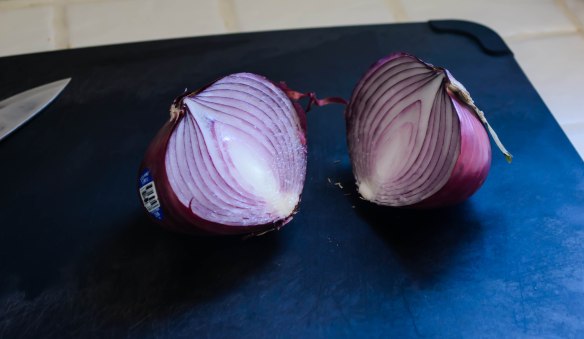 But that’s exactly what happened. Faced with a summer that just won’t end (upper 80s/low 90s predicted for the first weekend of October. October, people!), we couldn’t bear to waddle back to the butter-laden list of French classics. Brimming from the success of last month’s gastrique, I found myself continuing to think about fruit-based sauces – at once sweet and tart and deep in flavor from long simmering – and realized that barbecue sauce is, at its core, something like a gussied-up gastrique. There’s almost always a molasses or brown sugar component, and there’s usually vinegar of some kind, even if that is hidden within one of the most ubiquitous barbecue sauce ingredients of all: ketchup.

I’ve never been a huge fan of ketchup, so I decided to steer clear of it here and build my own collection of flavors. I’d been considering the merits of combining the flavors of apricot and bourbon, and what better place to do that than in a sticky, bubbly sauce, well-spiced, just aching to be brushed gently over some lucky poultry? Deeply caramelized onions, a squeeze of dijon mustard, a whisper of cayenne, and some cider vinegar joined the party, and then, because the richness and depth of concentrated tomato is such an expected note in this sort of sauce, I gave in and added some tomato paste for verisimilitude.

The important thing about this sauce is the time you give it. The onions must be cooked down and toffee colored. The simmer must last at least twenty minutes – I did mine for thirty before I was satisfied. The thick, slightly lumpy result can be used as is, or you can give it a quick whir with an immersion blender or standard blender to make a glossy, velvety smooth glaze you’d eat just as happily on a piece of toast as on a grilled chicken breast or pork chop (at least, if you’re me). I briefly considered using fresh apricots here rather than preserves, but since the prep time already promised to be the better part of an hour, I decided to take just one shortcut. Besides, the sweetness quotient in fresh apricots is unpredictable, and dealing with their thin, impatient skins did not sound like a welcome addition to my weekend plans. The guaranteed sticky thickness of a pectin-laced jar of preserves was the kind of guarantee I wanted.

It should not come as a surprise that apricot and bourbon, balanced against a meaty tomato backdrop and laced with just enough spice, are a beautiful match. The chicken thighs we lacquered this onto never stood a chance. Neither would pork, or salmon, and I’d even venture that with a splash of soy sauce, this could make an interesting adaptation of teriyaki to sauce a bowl of perfectly steamed rice and veg. What’s more, even though it’s still summer here, the blend of fruity sweetness and dark caramel from the bourbon make this sauce a lovely offering for fall as well, if you are lucky enough where you are to be watching the seasons shift.