Coming back feels like starting over. How do I do this? What do I sound like? Which words should tumble onto the page first? In an article from The New Yorker about language intimacy and its ties to relationship intimacy and communication, Lauren Collins notes that “Bilinguals overwhelmingly report that they feel like different people in different languages. It is often assumed that the mother tongue is the language of the true self. In many ways, it remains the primal vehicle… But, if first languages are reservoirs of emotion, second languages can be rivers undammed, freeing their speakers to ride different currents.”

Though I write and speak in English – it is my first and (aside from garbled, declension-less memories of high school Spanish and college Latin) only language – I have always felt that the spoken and written form of a language might as well be two different tongues (one of which doesn’t require the tongue at all). Thus, though I’ve talked about food consistently during the weeks we’ve been apart, I haven’t written about it (or about much of anything) at all. You can chalk this up to issues of vacation, politics, heat, social justice, laziness, or good old writer’s block, but the result is the same as a month off from practicing a different language: the water in that pool feels cold, and awkward, and heavy. This is why, for my students, coming back even after the summer makes writing feel ungainly and foreign – it is. It’s another language. It’s hard to float when you’ve spent a month on the solid ground you knew first.

So instead of plunging, I’m coming in from the shallow end, a few steps at a time. More recipes to come, I promise; there are only a few weeks before school starts and I want to have a good back-log to keep us going, plus there’s that whole 2016 blog challenge I took on in January that I’m doing so well with… But for today, as my first step back into the pool, I want to offer you something different.

Part one of our vacation was a visit with N’s parents. They live in northern California, in the same town he grew up in. This town, its sleepy rural character disrupted only by railroad and pottery booms, is now a distant outskirt to Sacramento and decidedly in the “suburb” category, boasting itself as an All-America City with wood-planked “downtown” area and well-marked signage advertising the “Wine Trail” in the outer reaches of the city.

When we first started visiting N’s parents there as a couple, every time we drove through town he would remark on something that had changed. Family grocers became Walmart. Undeveloped fields became track housing. He’s now able, thanks to the number of new roads, to get lost in the city he grew up in.

The one area of the sleepy old town that remains is where N’s grandmother lives: on an old ranch house a ways outside the center of town. We visit her when we make the pilgrimage through, and the last few times we’ve noticed signs for a relative newcomer to the scene: Goat House Brewing.

Around since late 2013, Goat House is the epitome of local. Their taproom is a converted barn. They grow their own hops – about 20 varieties – which they use in their brews. They experiment and collaborate and incorporate hometown ingredients – hop honey from their own vines in a light honey ale, Valencia oranges from their orchard in a Belgian, and an interesting wine-beer blend using a red wine made less than three miles away. It’s a very vertical, rather than horizontal, business plan – there is no sense that Goat House wants to stretch outward, only that they want to work closely and deeply with what is nearby. Because they are only open four days a week, until this recent visit we hadn’t had a chance to stop by. 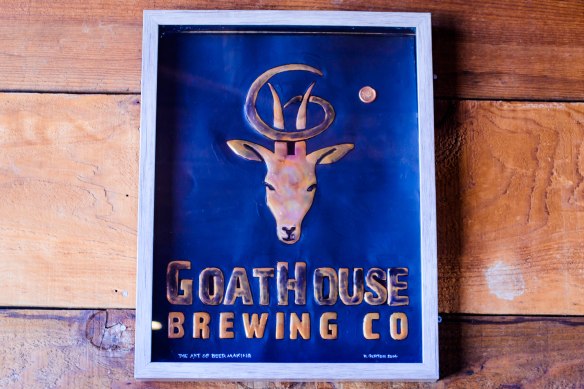 Logo inside the barn

This particular day, we spent an hour or so with N’s grandmother, listening as she coasted through stories about far-flung relatives and trying together to work out how the slim, distant branches of the family tree weave together. As we headed out to the car, we’d already decided to stop at Goat House Brewing on the way home. After receiving a friendly, detailed run through the tap offerings, we selected our first pours and settled in on the picnic style tables made from wood salvaged from an old stadium in San Francisco. It was in the mid-90s, but there was a breeze blowing through the barn’s wide open doors on either side, and we spent a comfortable hour or so sampling and enjoying this little sparkle at the end of a dusty drive.

Growlers ready to be filled

So here are some glimpses of Goat House Brewing, a place we’re already planning to return to when we next pass through N’s hometown, to try new flavors, to chat with the owners, to see Rory the donkey and Georgia the dog; to carve out a space of familiarity in this new-old city. 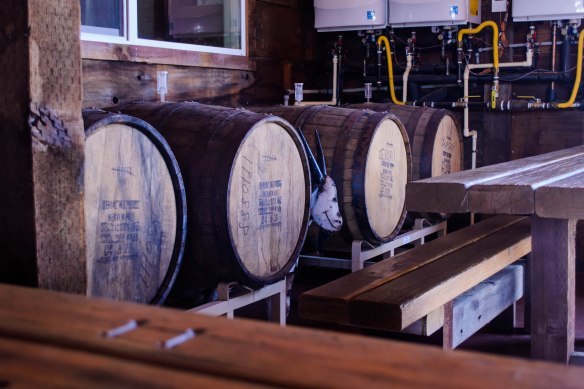 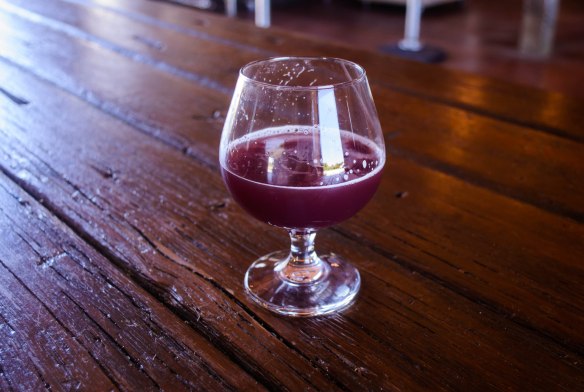 “Baciami Prima” (“kiss me first”) – intriguing wine-beer blend. All the mustiness of a wine cellar and all the funk of a Belgian in one deep purple pour. 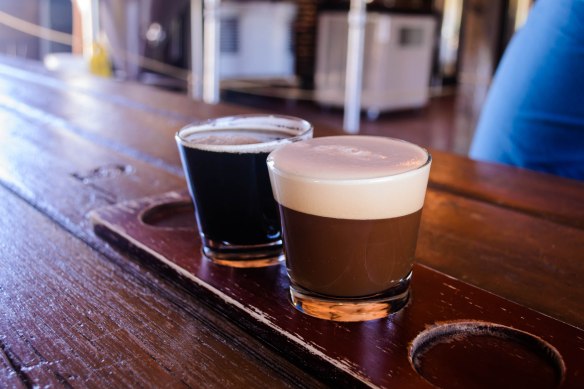 A “Dark Side” (left – their stout: creamy and roasty with hints of coffee and chocolate) and a “Row Hoe” (right – a red ale on nitro that I didn’t taste) 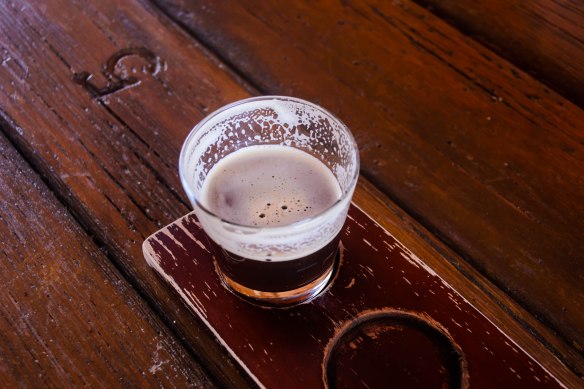 foam trails from the Dark Side

A brewery and taproom called Goat House better have some goats, and indeed they are right out back behind the barn (along with Rory the donkey, who helps keep them safe) 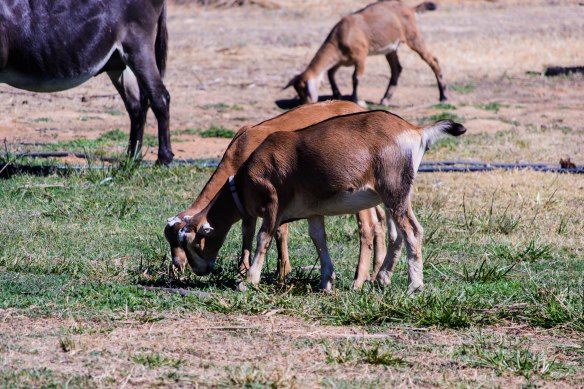 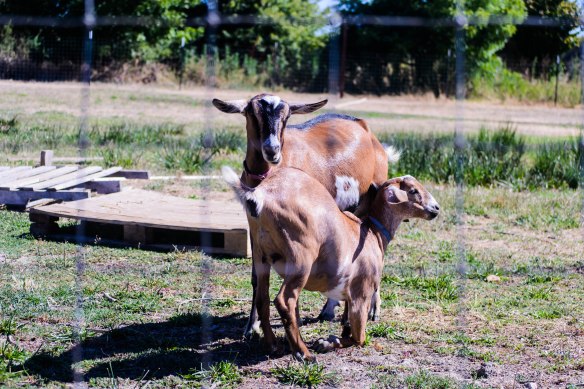 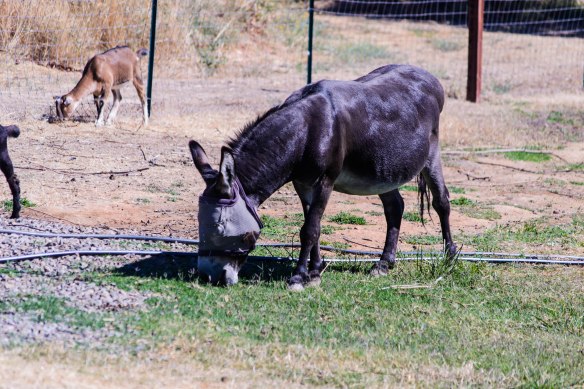 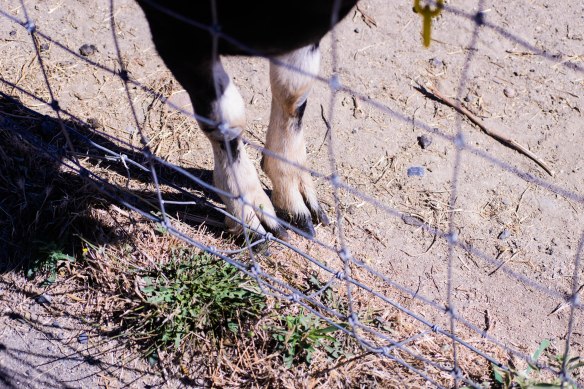 See you next week, when I hope my treading water in this form of my language will have smoothed, with the application of both kitchen and keyboard, into more practiced strokes.