I’m sure you’ve been waiting with bated breath for this post. I’ve made you yearn for it for half the month already! But I didn’t want to announce my intent without something to show for it, and now I finally have a triumphant opening act. Can I get a drumroll? The project I’ve decided on for 2015 is…. meatballs. 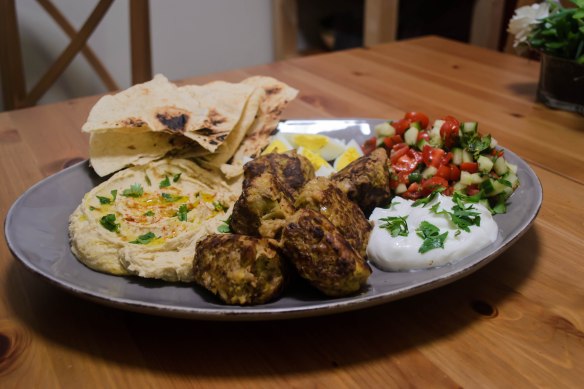 Meatballs appear in almost every culture. Albondigas find their way into soup in Hispanic cooking. Chinese meatballs are often steamed or boiled. Keftedes are Greek, kofta or kufteh appear in Middle Eastern dishes. A Swedish version coats very small rounds with a sumptuous gravy and serves them with potatoes and lingonberry jam. The classic American meatball, which is in fact of Italian origin, nestles amidst a mound of well-sauced pasta.

But they aren’t just, as the name suggests, balls of meat. Many meatball recipes combine different types of ground meat to maximize flavor but also adjust fat content. Very lean ground meats, like veal, which some meatball preparations use for its flavor, are often combined with something like pork or fattier beef to ensure tenderness and structural integrity. Bread in some form, whether dry and powdered or fresh, springy crumbs, is a frequent ingredient in a meatball. Though this could be to stretch the meat content (think bread crumbs as “filler” in a crab cake), it also absorbs fat and creates a lighter final product – “light” meatballs are often texturally prized above the dense thickness of a meatloaf, for example.

Most meatball recipes also incorporate some sort of aromatics, and sometimes eggs, to the mixture. This isn’t a mere unflattened hamburger; it’s a creation unto itself, and it needs some backup singers to really make the performance impressive. Onions or garlic, sweated or sautéed before incorporating, are common additions. Herbs, parsley perhaps the most common, are also frequent meatball interlopers.

In deciding on meatballs as my project for the year, I am challenging myself with ratios and with flavor combinations. Ratio-wise, the quantities of meat to bread crumbs to eggs to seasoning must be considered; I want a meatball with good structural integrity – it can’t fall apart during cooking – but I also want something light and springy, not tough and dense. Thus quantities, but also mixing and cooking techniques, must be mastered. As for flavor combinations, this isn’t a dish where you can taste a little at a time. It’s not a slice of roast pork that you can eat with or without the vegetable side. Everything in that little sphere must mingle well. Every ingredient must belong, with nothing extra and nothing missing.

I must admit that I am not a huge fan of the most common meatball incarnation in this country. The planet-sized spheres that arrive, drowning in marinara, balanced uneasily atop a plate of spaghetti, have never thrilled me. But outside that standard, pasta-draped option, I love a good meatball. I hope you do too.

So here’s the challenge: once a month, I will present you a meatball recipe. I have some ideas already, but I’m starting myself out gently with a few recipe adaptations before I strike out into unpracticed territory. And if you have any meatball ideas you’d like to see actualized, let me know in the comments or send me an email! I’ll happily cook something up. 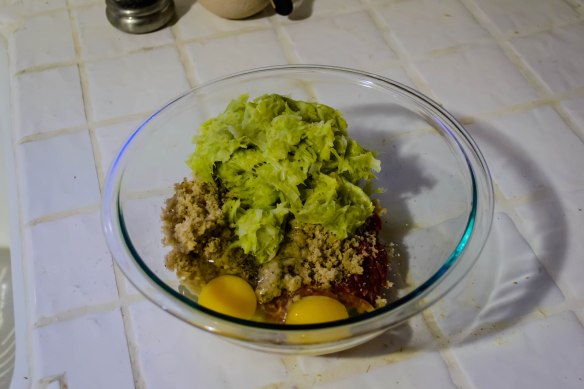 For the opening act, I looked no further than Yotam Ottolenghi and Sami Tamimi in their stellar cookbook Jerusalem. I love this volume. When I bought it for myself last year, I gave up marking recipes I wanted to try with a post-it note because, let’s face it, that’s just not helpful when you are marking almost every page. But the Lemony Leek Meatballs, curiously filed in the vegetable section, stood out. First of all, as Ottolenghi and Tamimi note, they are packed with a staggering quantity of leeks which, despite the beef that makes up the “meat” component, really do emerge as stars in the dish. Secondly, the sauce, chicken broth spiked with a tremendous dose of lemon juice, sounded so bright and aggressive with flavor that I just wanted to drink a mugful.

I wasn’t disappointed. The meatballs sear up golden and aromatic, and as they simmer in the sauce they soak up its acidity and turn it into something outrageous – an intensely savory lemon caramel coating around fragrant pyramids (mine wouldn’t stay round). The leeks and beef are a stellar combination, and the addition of fresh bread crumbs as well as the gently pulverized leeks keep the meatballs light and fresh, probably why they are classified as an appetizer or starter in Jerusalem. 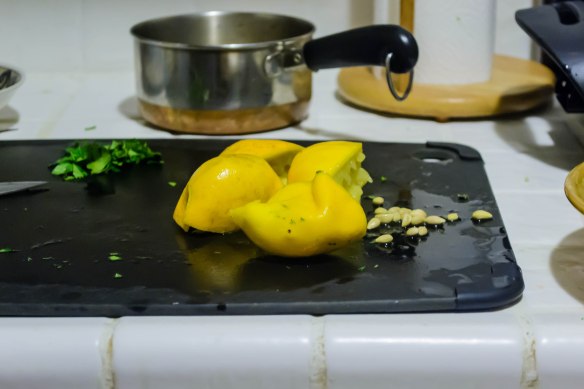 I’ve made a few changes from the original, a dicey business with beloved traditional recipes like many of these, but they are minor. Rather than steaming the leeks, I’ve sautéed them gently in a mixture of butter and olive oil for extra flavor. To keep with my project theme, I’ve maintained the ball shape, rather than flattening them into patties as Ottolenghi and Tamimi direct. Finally, as I’ve noted below, I increased the number of meatballs – rather than 8, as in the original recipe, I’ve done 12, and really you could easily make 16 from the same amount of mixture.

Forewarning: this is a lengthy process. Like, if you are really on top of your game and quick on the prep and ready to multitask, “lengthy” means about two hours. The leeks must be cooked down first, which takes a good 20 minutes, and then cooled. The meat mixture, once it’s formed into balls, must be chilled for a full half hour to ensure that they stay together in the pan. After searing, the meatballs simmer in the rich, tart broth for another half hour, and then must cool a bit, as they taste better just warm or at room temperature than scaldingly hot out of the pan. All this means you are looking at almost two hours of prep and cooking time – not onerous, particularly because half an hour of that is just cooling your heels while your meatballs do the same, but worth noting before you charge in hoping to have dinner on the table in the blink of an eye.

Serving suggestions: tuck them into warm pita or naan with the yogurt and perhaps a few slices of cucumber, or sit them on a bed of fragrant couscous shot through with toasted nuts and green onions, or maybe some finely chopped dried apricots. Add a sprinkle of good, tart feta to the top for some extra zing.