As by now cannot have escaped your notice, the recipes I post and post about here are not old standards.  They are not tried and true, they are not perfected, sometimes they do not even include measurements.  They are my fun and foibles in the kitchen and my reports about how they turn out.  Thus, when I get excited about a recipe or an experiment; excited enough that I take photos of the ingredients and careful note of the process, and the end result peters out a bit under my wild expectations, I am often struck with perturbation.  To post or not to post?  Usually I decide to share rather than not to share, but there is that lingering question.

The most recent dilemma rests with Thursday night’s dinner.  I was jazzed about this one.  My husband is a chicken and beef (and sometimes salmon) man, and yet he loves pulled pork.  More specifically, he loves Papa’s Soul Food Kitchen’s pulled pork.  With a side of mac and cheese and yams, most often.  But he seriously digs that stuff.  Naturally, then, I was excited to run across a recipe for pulled pork made in the crock pot, and decided to add some of my own alterations and give it a try.  We picked up a beautiful two pound pork butt from Long’s Meat Market, and on Thursday morning I chopped, dropped, plopped, and poured ingredients together in the slow cooker, and left.  Five hours later the house smelled like a BBQ restaurant.  Eight hours later I swear the dog had left drool marks all over the hardwood floors.

It came apart like butter.  It collapsed over itself in the crock pot as I tried to pull it out.  It dripped moisture and smelled like heaven and looked soft and fragrant and luscious.  My salivary glands went into overdrive.

And then we ate it.  And it was… good.  It wasn’t fabulous.  It certainly didn’t rival Papa’s platter.  It was a little watery, a little porky, and it didn’t have that saturation of BBQ sauce that pulled pork ought to have.  So I wondered, after spending all day (well, sort of) on a meal, after arranging the ingredients just so for a foodie fashion shot and thinking of a clever name and even taking mental notes about how much of each component went into that yawning, welcoming whiteness of my slow cooker, and then having it not be stellar, should I still post?

Clearly, the answer is yes.

Here’s how it went down, with thoughts on reparations for next time:

1 big red onion, frenched (cut in half end to end, then sliced into thin angled wedges)

1-2 shots Jack Daniels or other whiskey

Put the onion slices, garlic, and ginger in the bottom of your slow cooker.  Plop the pork butt on top and sprinkle with salt and pepper.  Pour the whiskey, ginger ale, and sauce over the top of the pork.  Cover and cook on low for 8 hours.

At this point, I took the pork out of the slow cooker and used two forks to pull it into loose meaty strands.  Then, because there were potatoes that needed buttermilk, butter, and a good deal of mashing, I plunged my pulled pork back into the liquid that had collected in the bottom of the slow cooker.  This was a mistake.  Instead, I should have emptied the vessel, added an inch or two of BBQ sauce, and mixed in the pork.  It would have stayed drier, it would have collected the flavor of the sauce, and it would have been better prepared to hold together when we slopped it onto burger buns to transport to our eager mouths.

Tasting, we got the rich soupy porkiness of the meat, spice from the sauce, and maybe the barest hint of garlic and ginger.  I don’t know what the whiskey contributed, besides perhaps help in breaking down the muscles of the pork, but it was fun to be able to add it.  Maybe a slight tartness made its way into the meat, but that was all I sensed. 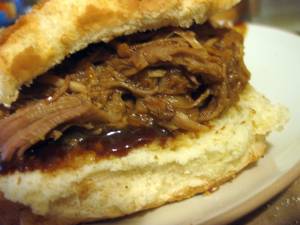 The other thing I missed, which can’t be helped because I used a crock pot, was the crusty crunchy hard edges of the pork that result from barbecue treatment.  The texture of the pulled pork is so lovely, but it is nice to have a bit now and then that puts up some resistance.  I have always thought searing the outsides of a piece of meat before putting it in the slow cooker defeated the purpose of a one-pot, easy meal, but I wonder whether that would help here as well.

So, certainly not a failure, but not the most resounding of success stories either.  Still, I do have that old family BBQ sauce recipe kicking around that I’ve never tried, and homemade sauce draped over luscious piggy goodness couldn’t be anything but an improvement…

Do you have a favorite BBQ sauce recipe?  What makes it special?