I grew up in an almost ridiculously normal (whatever that means) American household.  One mom, one dad, one sister, one dog, northern European ancestry, middle class.  That meant 3-part plates at dinner time: meat, starch, veg almost every night.  Sometimes the meat was grilled, sometimes baked, rarely fried.  The vegetables and starches were wide in variety and the casseroles, while present, were an occasional item.  We weren’t from the Midwest – in fact, of all the places I’ve lived in my life I’ve never had a home in that wide, grain-covered middle expanse of the United States – but we certainly could have been.

Looking back on them now, I love those family dinners, but I’m not sure I did then.  The food my mom cooked was good, but I wasn’t ready to notice it yet.  Dinner was dinner.  My sister and I always drank milk – sometimes white and foamy and cold, sometimes overdosed with chocolate syrup, sometimes with straws – until we both developed lactose intolerance.  Milk was replaced with juice, or water, or, as we got older, a glass of wine.  What grownups we felt like, sipping wine at the dinner table with Mom and Dad!

Dinner was, when I was young, a time to be together as a family.  Each of us took a turn spoke about the events of the day.  I found this part of the routine boring.  I loved my parents, but the meetings and conferences they described were not my cup of tea, and not what I was interested in hearing about.  Neither, much to my mom’s dismay, was I particularly invested in sharing my own daily experience.  I remember vividly her attempts to eke out details about my day at school: “what was your favorite part?”  My answer was usually a single word, or even a single syllable.  “Lunch.”  School just wasn’t thrilling enough to talk about.

When I was a senior, my dad was transferred to another part of the state.  My parents, bless them, didn’t want to tear me away from my last year of high school, so my dad rented a room in a suburb near his new office and came home every other weekend.  My mom was an elementary school teacher, and to lighten her load a bit, cooking dinner once a week became one of my tasks.  It turned out I much preferred this to my other chores, which included mowing the lawn and taking the trash bins down to the curb on garbage day.

My early attempts at dinner were, as you might expect, far from gourmet.  My Nana sent me a cookbook – The Complete Guide to Country Cooking – and a subscription to Taste of Home magazine, and I stubbornly stuck to these sources when it was my turn to invade the kitchen.  Why I wasn’t willing to defer to Mom’s collection of cookbooks I can’t begin to imagine.  Teenager-itis, I suppose, and maybe a feeling of needing to define “my” cooking against hers – Country Cooking was my repertoire.  This led to somewhat disjointed meals: I remember making something called “Peachy Ham Slice” and, minutes before the dish was ready to serve, realizing that I should probably include a few side dishes.

When I return “home” to my parents’ house, a house I didn’t grow up in, dinner is like a party.  Mom and I plan a menu with at least one fancy item.  It might be seared ahi, dressed with a mango and avocado salsa.  It might be couscous spiked with coconut flakes and toasted almonds.  It might even be the dessert, which as kids usually meant a small container of fruit flavored yogurt, but now could range from chocolate cake smothered in ganache to crisp, toasty biscotti.  We break out the tablecloth.  We set the dining room table with cloth napkins and balloon-bulbed wine glasses.  Dinner is an occasion.

But when it’s every day, when it’s in my own home, with my own little family (just N. and Lucy and me), dinner is different.  We are tired.  N.’s job is demanding.  On a regular weeknight, dinner means curling on the couch with lap-desks, plates positioned just so, and turning our brains off for a while as we watch an episode of Top Gear (the BBC version only, please), or Arrested Development, or even, perversely, Kitchen Nightmares.  Our forks work mechanically until our bellies sigh with contentment.  This isn’t fancy dinner, but it’s home, and it’s comfort, and it’s now.  If our family ever gets bigger, I want our child or children to have the same dinner experience I had with my parents and my sister: talking around the table, music in the background, together.  But that’s for someday.

That act of gathering around the table, though, or munching away on the couch, that’s not all dinner is.  At least not for me.  For me, dinner starts in my brain.  Dishes, flavors, raw ingredients that could be combined jostle around, shouting for attention, telling me their stories.  What if I used hash browns instead of tortillas to make a quesadilla?  What would that be like?  What if, for extra texture, I folded kale chips into the hash at the last minute instead of serving them on the side?  What if, oooh, I roasted the mushrooms for stroganoff instead of just sautéing them in a pan?  It’s like the scene in Disney’s The Sword in the Stone where Merlin packs up his traveling bag, except instead of dishes and furniture waltzing through the room, it’s ingredients.  When they seem particularly promising, I jot them down on a legal pad I keep just for the kitchen.  They become pizza and roasted vegetables and frittatas and pastas.  They bake into seed-sprinkled loaves and butter-drenched biscuits, and, at least last week, overly browned sweet potato fries.  They are rarely 3-part plates anymore – six years of meager graduate school stipends forced much of the meat out of our diets – but combine spices and heat in ways I never thought about when I was a teenager struggling to put meals together.

In my kitchen now, as I prepare to start dinner, all of the stress and concerns and aches I’ve had throughout the day get pushed to the sidelines by the creative bubble in my brain expanding out down my arms and into my fingers: time to cook!  My vegetable board comes down from its hook, I hone my knife a few times, just to keep the edge nice, and I’m chopping garlic and mincing ginger and grating lemon zest.  I’m whisking white wine vinegar with mustard and honey to start a salad dressing.  I’m loading a pan with florets of broccoli to roast.

Then Lucy arrives (yes, my “daughter” is a Lucy too!).  Friendly eyes, hopeful wag, up for anything, she stands in the doorway, letting her nose suss out the situation.  I give her a carrot or the thick, stubby stem end of a head of broccoli (her favorite), or once, memorably, a whole Brussels sprouts stalk she was determined to annihilate (I took this away from her fairly quickly).  She hangs around hoping until I light up the stove.  She doesn’t like the gas, so she heads back to the living room where she can’t see the tiny blue flame. 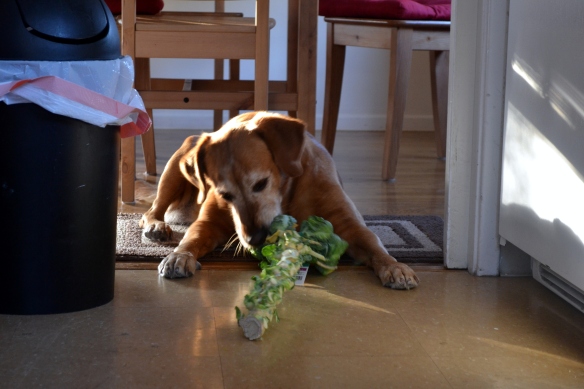 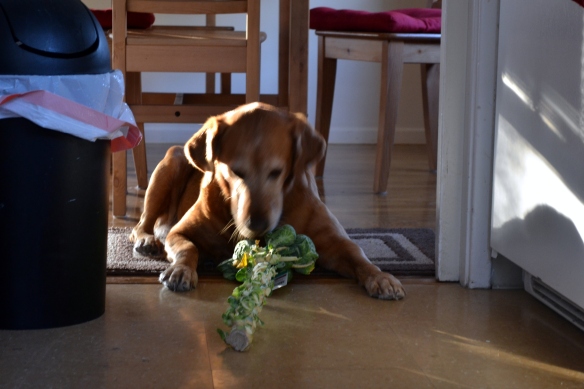 When things start to smell good, N. does a pass through.  He peeks into skillets, examines the counters for ingredients, snags a clump of cheese or a piece of marinating tofu.  Sometimes he’ll watch for a minute as I flip an omelet or deglaze a pan.

That’s how we come together, at dinnertime in my family.  We may not talk much during the meal (though Lucy and her velvet brown eyes have plenty to say about the smells she’s not tasting), but the magic of the kitchen itself pulls us all in.  We serve ourselves, pan to plate, and retreat to the living room, but inevitably find ourselves back at the stove, sneaking seconds.  Lu makes a round of the floor as N. and I eat, just to be sure nothing has fallen from the countertops.  And sometimes, later, as we pack up the leftovers for another night, N. tells me it was the best pizza I’ve made so far, or that I can roast carrots like that again anytime, or that he was really craving comfort food, and those breakfast burritos were exactly what he needed.  And that spurs the ingredient dance to start again, and it reminds me that dinner is maybe my favorite time of day.