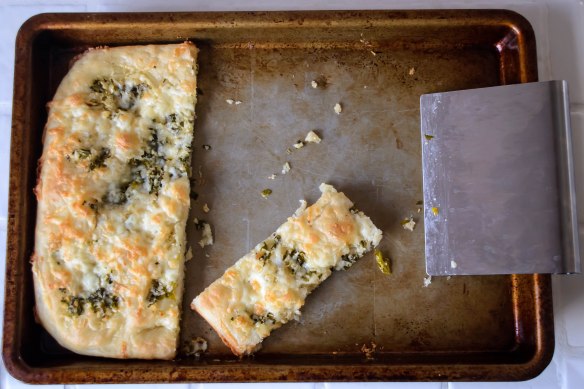 I have a thing about garlic bread.  Achingly soft butter, a scattering of herbs, pungent, sharp garlic paste, spread thickly on sourdough baguette and broiled until the butter bubbles and browns and the garlic takes on a toasty depth; what’s not to love?  I make it in the oven, I make it on the grill, I’ve even tried turning it into a sandwich.  But all too often, the process of toasting leaves the edges of the bread blackened and the crust just too crunchy for my taste.  I want crisp toastiness, but I don’t want mouth-scraping shards of bread shrapnel. 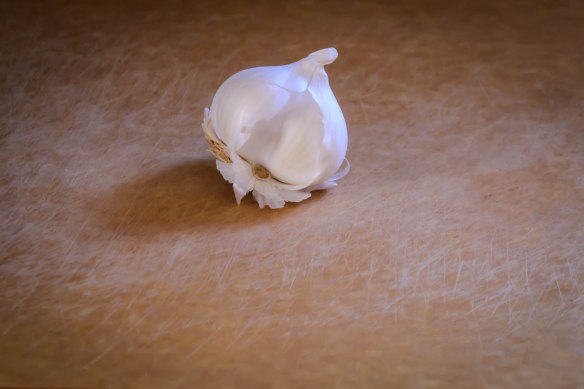 Enter flatbread.  I don’t mean the dry, cracker-like stuff carelessly sprinkled with toppings and served up as an appetizer.  I mean something a little puffier, a little richer, a little cheesier.  A few months ago, I dabbled with a Food Network recipe for Spinach and Cheese Flatbread, and was delighted by the elastic dough that bubbled up into a soft-but-crisp rectangle.  It is chewy and golden, but not quite as sturdy as a pizza dough.  The bottom, slapped against a well-oiled sheet pan, gets just crisp enough to support all but the most ridiculously sized slices (don’t ask me how I know this.  Thank you), so you aren’t left with a square that wilts as you hold it.

As soon as I ate the FN version, I realized this was the answer to my garlic bread dreams.  The dough would be smeared with a loving, excessive layer of garlic-butter-herb-are-you-drooling-yet?-paste, sprinkled with fontina, which melts beautifully and has a mild funk I really enjoy, and baked until crispy toasty nirvana resulted.

My results approached sublimity, and the shortcomings were entirely human error, which seems fitting.  The paste didn’t spread very evenly because this is a soft dough: it threatened to tear when I applied a spatula, so I ended up smearing and dolloping my mixture with my fingers.  You could easily solve this by melting your butter instead of just softening it, and then pouring the mixture evenly over the dough.  Then, because I was afraid the butter and garlic would burn at pizza-cooking temperatures, I was pretty liberal with my cheese application, which meant that the toasty roasty golden color I was expecting didn’t quite happen.  Another minute or two in the oven might have helped, but we were hungry.  A little less cheese might have helped too, but seriously, less cheese?  Totally unreasonable. 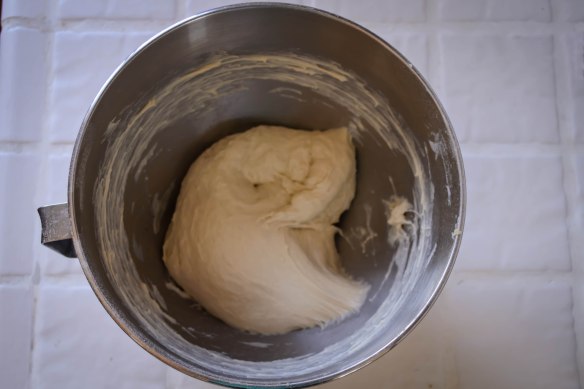 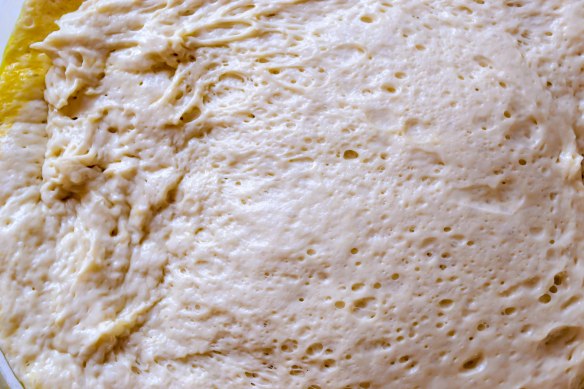 In any case, the bread itself was puffy and buttery and decadent.  The garlic loses some of its pungency during baking, but retains that addictive sharpness and bright tingly aroma that makes it so good.  The dollops of butter became dimples of puddly richness that, upon reflection, reminded me a little bit of the center of a really good bialy.  The bottom of the crust is like an old-style pan pizza: golden with burst air bubbles and just oiled enough to leave your fingertips in need of a napkin. 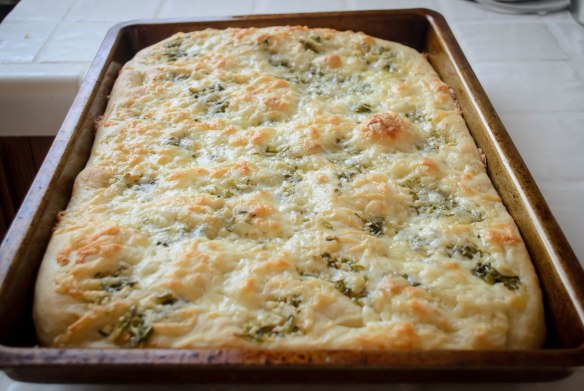 This is a great happy hour snack.  Since it heats up the house, it gives you a great excuse to sit out on your patio, or deck, or picnic blanket, or camp chair.  It pairs well with a crisp, summery wine, and equally well with a frosty pint of beer (or maybe, since, you know, Cinco de Mayo, a classic Corona with lime, or a salt-and-cayenne-rimmed margarita).  You can use any combination of herbs you like.  I chose what was happening right outside my back door:

Oregano – I love the fuzzy leaves on this little guy. 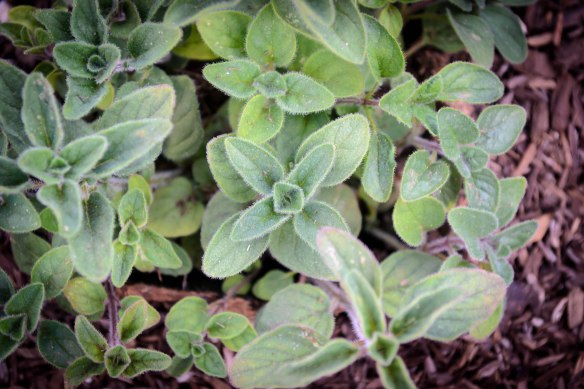 Basil – back in late fall, I relocated a few stalks of basil from the supermarket clamshell container to a vase of water, and instead of wilting, they grew roots!  I shook my head, still in Oregon mindset, while planting them – they would never make it through the winter – but this is Southern California, so of course they did, and are now flourishing.  I’ve read that plucking the blossoms off encourages them to keep producing leaves, so every day or so I faithfully scatter the delicate white blooms.

Parsley – my parsley plant is looking a bit wild these days; it has bolted thanks to the heat. 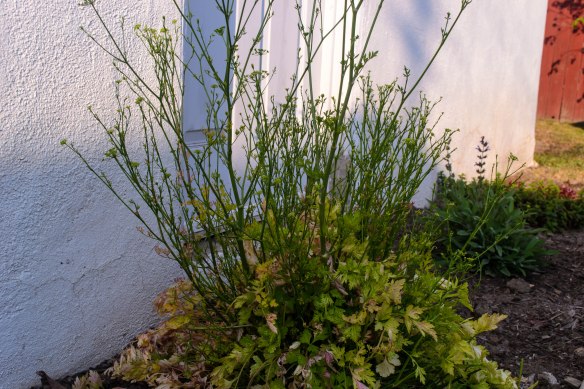 But if you peer down inside, amidst the sunburned jungle, you can see there are still some stems worth serving! 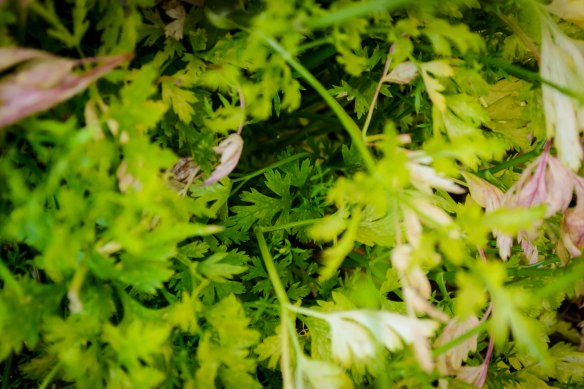 As for additional toppings, you could add sundried tomatoes or thin rings of bell pepper or even jalapeno to the butter paste if you want to get fancy about it, and it would certainly fare well dipped into a bubbly saucer of marinara, if that’s your thing.  Either way, I think you should make this.

Are you making it yet? 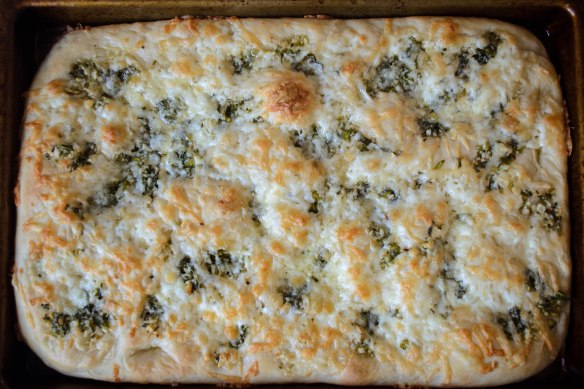 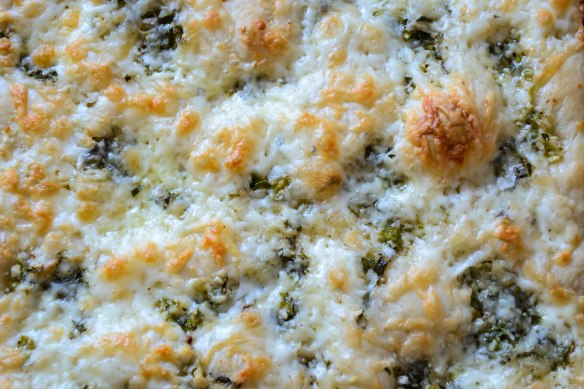