Sometimes I agonize over what I’m going to cook. I leaf listlessly through cookbooks and batter my keyboard with demands of something new and fresh and better and, dare I say it? Original. But this month, faced with the Twelve Loaves challenge of baking bread with spices, I knew almost immediately what I wanted to do. I don’t know where the idea came from, but I knew it was going to be a variation on my Nana’s sweet roll dough, stuffed with luscious swirls of pumpkin pastry cream and baked into a decadent loaf. 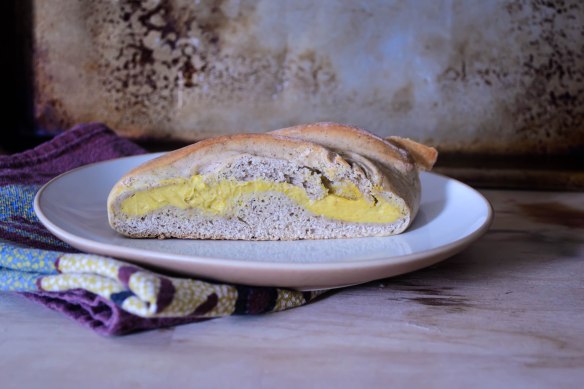 The problem with this idea, as I started to do some research, turned out to be that no one had done it. I’m not saying this is a bad thing; it’s tough to think you’ve invented something, and then Google it, only to find probably billions of results that are either more amazing-sounding than you’d imagined, or more beautifully photographed than you have the ability to do.

This one came up with nothing. I started wondering: can you bake pastry cream? If you can, why has no one done this? I tried multiple searches, I leafed through my cookbook collection again, feverishly this time; I even polled friends to see whether this was a thing. One foodie friend speculated unpleasant melting would result. Baking forums promised curdling. Every recipe I located for something remotely similar advocated baking the dough and then piping chilled pastry cream into it. I was contemplating using Nana’s old cream horn molds to wrap little crescents of bread and then shoot pumpkin pastry cream into them, and then I found this. It’s a recipe for something called Torta Della Nonna, which translates to “grandmother’s cake,” and consists of a lovely tender dough, filled sometimes with sweetened ricotta, sometimes with mascarpone, but sometimes with a layer of vanilla or lemon pastry cream! 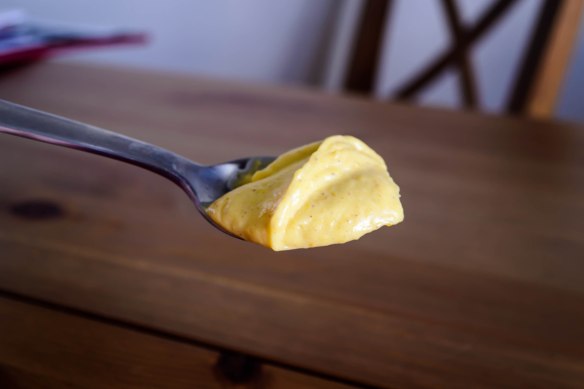 Victory, if not ensured, at least not a total shot in the dark, I got to work. Pastry cream, if you’ve never made it, is one of those projects that sounds terrifying – hot milk, egg yolks sure to curdle, frantic whisking with scalding and scrambling around every corner – but isn’t really that tricky. It’s another one of those “read ALL the directions first and have your ingredients prepped” kinds of recipes, and suddenly the milk and eggs you were whisking away at thicken into this magical, glossy, extravagant slosh of something an éclair would beg to be filled with. And when you finish tasting it to make sure it’s edible, you have only to strain it (in case of accidental scrambled bits), refrigerate it, and then decide what to do with it. 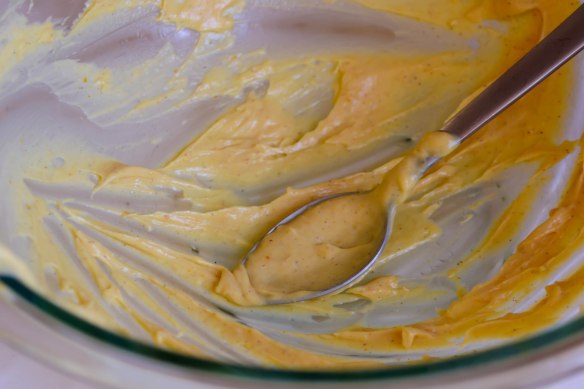 I opted, to be sure the Italian grandmothers I was never lucky enough to have knew what they were doing, to bake up just a little custard cup of it. If it was going to melt all over the place, I’d take a new direction. It didn’t. The top layer formed a thin skin, like custard or pudding left to set without a layer of plastic wrap pressed over it, but below that exposed skin (which, if I’m honest, I don’t really mind) was a tiny vat of this stuff, rich, creamy, better-than-pudding, and I knew we were on our way to great things.

From there, it was a matter of making up a batch of dough, a little more decadent than usual thanks to the addition of an extra egg and a few extra tablespoons of butter (hey, if you’re going to pack it with pastry cream anyway, you might as well go whole hog), and spicing the whole thing with the flavors of the winter holidays: cinnamon, ginger, nutmeg, cloves. 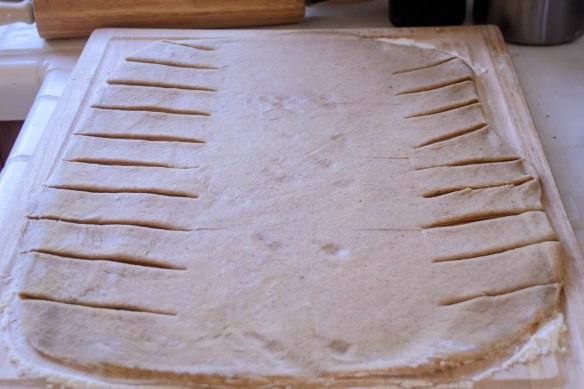 I decided to make a lattice-top loaf, which entailed rolling, slicing strips along both edges of the dough, spreading the glossy, velvet perfect orange cream inside, and weaving the whole thing together. However, I did this on my bread board (it made sense at the time), not considering that the dough, flexible and buttery already, was about to double or triple in weight thanks to the addition of the cream, and be unwilling to transfer to my baking sheet. Thus, after considerable hand-wringing and fancy spatula work, I ended up with something like a horseshoe, only slightly structurally compromised. I suggest filling and finalizing your loaf on the greased baking tray you’ll be putting into the oven. 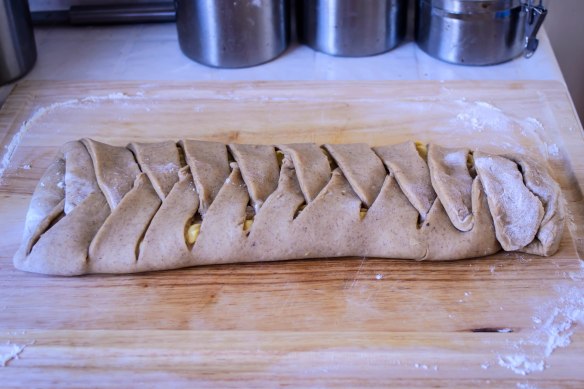 My god, this was good. The pastry cream oozed out of the caverns and crevices left by inexperienced and impatient lattice-work, and these parts gained the same skin as my experiment. This is, if we’re going to be picky, perhaps of a slightly compromised texture – it gets slightly grainy and thick – but it’s not enough to be a bother. Because once you get beneath the outer layer and your teeth sink into the delicately sweetened, pumpkin lushness below, you won’t ever want to eat anything again. And the dough itself is no slouch either. It bakes up warm with spices and beautifully textured. The combination is like… well… it’s like nothing I can really think of. The bread is like a sweet roll or a yeasted coffeecake; not as light as a doughnut, but not as heavy as your standard loaf of bread. The cream inside makes it (almost) too decadent to be a breakfast, but it’s a more than suitable dessert or afternoon pick-me-up. To make it even better, this bread actually tastes better the second or third day after you bake it (or even the seventh… I’ve kept our leftovers wrapped in plastic wrap and in the fridge, and a week later it is still moist and perfect). 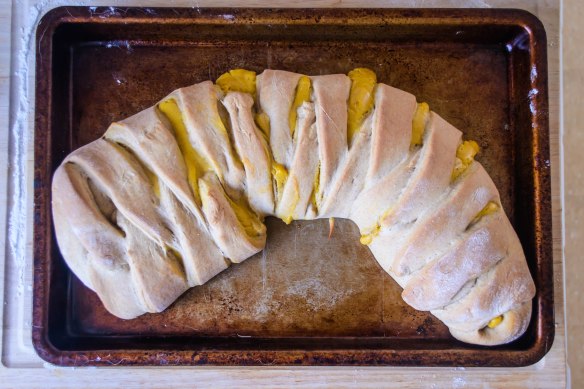 2 cups half and half (or, if you’re me, nearly 1 cup heavy cream and a little over 1 cup whole milk)