One of my favorite games to play with N. when we are out, about in the world, is a riff on my favorite television show: Chopped (another favorite is noting a couple and trying to determine the status of their relationship based on their clothing and body language, and sometimes, how we think their evening will conclude. We are, clearly, lovely people). Specifically, he will tell me whether I’m to build an appetizer, an entrée, or a dessert, and will then list four random ingredients. Unlike the show, where the contestants have a mere half hour to create a meal that incorporates all four, I simply have to describe the dish I would make.

I love this game. Like this year’s blog project, it gives me a chance to stretch my imagination; it’s like a trivia game, except instead of just knowing the answer, I get to invent it. Last fall we were waiting in line somewhere and N. gave me the following as an entrée round basket of mystery ingredients: halibut, bacon ends, vodka, and kale. “Easy,” I said, and rattled off my entry: diced bits of bacon, rendered until crisp. Halibut cooked in the bacon fat with just a little bit of brown sugar. Bright kale sautéed until just wilted, then tossed with the crisp diced bacon, all balanced over a puddle of rich, creamy polenta and crowned with a few spoonfuls of some kind of vodka cream sauce.

Typically, after the presentation of a meal idea, we discuss briefly and move on. This one, though, sounded so good that I decided I should actually make it. As this process usually goes, I then spent the next few months thinking about it, gradually adding layers and complications, and ultimately being influenced by the show itself for several of the components (notable the kale: in one episode a contestant slices kale across the grain into a fluffy pile of thin confetti before sautéing and salting so aggressively that judge Alex Guarnaschelli, on whom I have a relentless lady-crush, admiringly declares it somehow like a potato chip in addictive deliciousness).

The dish I ended up making doesn’t deviate much from the original plan. I did indeed render the bacon, though I reserved some of the fat for the halibut and used most of it to cook the kale. In addition to bacon and salt, the kale also got a drink of vinegar to enhance the potato chip comparison. The halibut remained as envisioned: salt, pepper, a light sprinkle of brown sugar (at the suggestion of a bed and breakfast owner during a family vacation in Alaska when I was in high school), and a light sear until the center is just cooked, pearly and opaque. The polenta, which is fast joining mashed potatoes as a favorite starch option, ended up with some corn kernels thrown in, which is an easy but stupendous addition I insist you try. The vodka got flamed in some brown butter, then whisked with a bit of lemon juice and mustard to create a rich, barely emulsified sauce that tasted perfect on everything. I knew I was in love when, after only a few bites, I was already texting my sister to tell her about it. 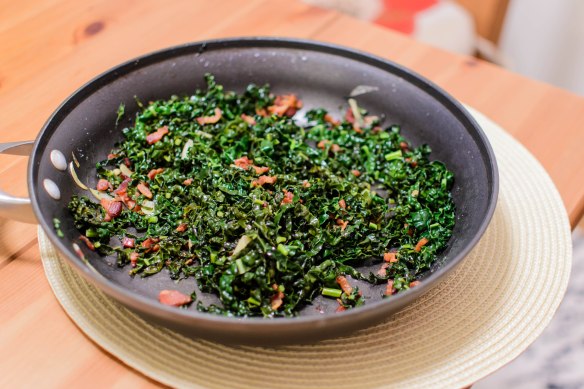 This is one of those dishes that is complicated only because it has multiple components, and you want them to be done at the same time. Therefore, though I’ve divided up the ingredient lists per element (polenta, kale, fish, sauce), in the procedure I’ve indicated when to switch back and forth between pans.

30-40 minutes, but you must be quite organized

zest of one small lemon (1-2 teaspoons)