I told N., as he stood over the sink sampling a triangle of hot waffle and I finagled my plate of stacked waffle pieces around the counter searching for more light, any light, that I’m going to have to start making blog-worthy meals as weekend lunches. He shrugged, swallowed, and reached for another piece of waffle. I don’t think he’s averse to this idea.

The cat-like, dozy, quilt-loving part of me worships autumn’s time change day. An extra hour of sleep, waking to find it light out but there’s still plenty of time for whatever (but if we’re honest, probably grading), and the following few blissful weekdays when getting up at 6am doesn’t feel like masochism. But the blogger in me dreads its coming. Most of what I post here – the savory stuff, anyway – is planned and eaten as our evening meal. Amidst getting home from work, walking the dog, and catching up with each other, by the time I start cooking I’m chasing daylight. When we turn back the clocks and darkness creeps ever earlier, the little amateur photographer in me wails with despair. The light! Where is the light?! It’s a cruel trick, made crueler by the enjoyment the non-blog-obsessed part of me reaps from it.

Speaking of tricks, let’s talk Halloween. What did you do? Who (or what) did you dress as? We did not have a single trick-or-treater, which devastated me, but delighted my students, who received the candy I didn’t give out (or eat myself, but who’s counting?). To fill my costume yen, I had to turn to Facebook stalking, and my easy favorite was a former colleague’s daughter, who dressed as a jellyfish. They fitted a clear plastic umbrella with a jumble of LED lights, and she wore a frilly tutu and held the umbrella over her head to emulate those weird, beautiful, alien creatures. Genius. 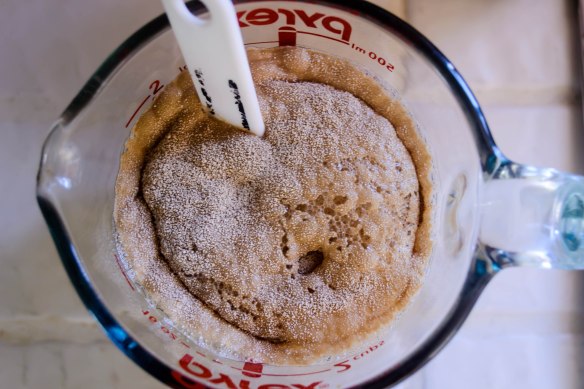 On the treats front, aside from the Almond Joys I compulsively scarfed as the afternoon went on (reminding myself they were “fun size” totally assuages my guilt), I decided Halloween dinner should be special. A few months ago we gorged ourselves on beer batter waffles during an unexpected brunch at a little cerveteca in Venice and were delighted by the incredible yeasty flavor. I decided this was the night to do some recreating.

I started with a recipe for maple bacon yeast waffles in a King Arthur Flour catalog, trimmed down the ingredient list, and replaced the called-for milk with beer and the maple syrup with barley malt syrup to emphasize the malty flavor even more. The batter is a floppy, burpy, smelly sourdough sponge sort of concoction, which burbles sullenly for an hour or two before you ladle it by half-cups or so into a waffle iron and sizzle it into solidity. It’s easy, for a yeast-laden item, and as long as you think about the rising time before you suddenly decide you’re starving and dinner needs to happen NOW, it’s doable for a weeknight.

The thing about a recipe like this, though, is that the rising time gives you time to think. If you’re a normal person, you might use this blessed extra hour to catch up on housework or relax and watch television. If you’re me, you start thinking about sauces. I like maple syrup, but I get tired of it. These waffles, with their yeasty aroma and almost savory flavor, needed something special. As a salute to Halloween, I decided to make a quick bourbon caramel drizzle to top them. I mean, why not? It was a holiday, after all.  Butter, brown sugar, bourbon, and salt, bubbles stacking up on themselves in a tiny pot, and a swig of milk (or cream) to thicken and mellow and relax everyone. 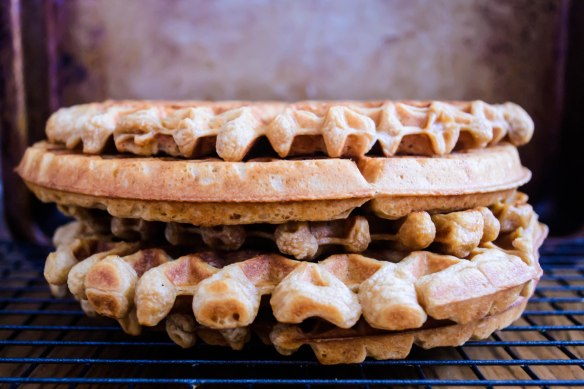 So back to the darkness problem. Usually, when I arrange a plate of dinner to photograph it, N. waits until I’m done to serve himself and head in to the table to eat. On Halloween, as I angled and shimmied and adjusted, trying to catch the last glimmers of fading light and listening to my shutter speed get slower and slower, he stacked waffles onto his plate, drenched them with the caramel sauce, and disappeared around the corner to start his dinner. That, to me, proves its deliciousness beyond all doubt.

1½ cups (12 ounces) lukewarm beer (I used a nice roasty porter, heated in the microwave about 30 seconds)

3 tablespoons barley malt syrup (you could likely replace this with maple syrup or honey, but I haven’t tried it. If you do, let me know!)