Now that the slow-cooker and I are friends, I put it to work again yesterday.Calling on the small, tissue-papery pages of the instruction-and-recipe manual that came with the machine, I set out to break through N.’s clogged nostrils (courtesy of the first cold of the season) by embarking on Chicken with 40 Cloves of Garlic.

Still clad in pajamas, I made a bed for the chicken by cutting a few longish spears of celery and arranging them over the bottom of the stoneware. Then, after evicting the gizzards from the chicken’s insides, I shoved a sprig each of Italian parsley, thyme, rosemary, and sage safely inside to flavor our bird from the ribs out. The chicken settled nicely into the pot as well. After counting up and scattering around forty cloves of unpeeled garlic, which was an impressive 2½ bulbs, I chopped up another sprig of each type of herb and sprinkled that over the top of the chicken. I added some sea salt and pepper as well, for a little extra flavoring.

The smell that pervaded the house for the rest of the day would have driven away even the most determined vampire. It was divine. The dog spent much of her day pacing slowly through the kitchen, nose in the air and hard at work. I spent much of my day making excuses to go into the kitchen and cast loving glances at dinner. After about hour five, N. informed me that he could smell something, and after hour six or seven he altered his evaluation to decide that something smelled good! This was all I could have hoped for, but there was more.

After about nine hours, our bird was so tender that it fell into pieces when I tried to lift it from the slow cooker. I pulled out as many cloves of slow-roasted, golden-brown, almost sweet-smelling garlic as I could, and while the chicken cooled a little I sliced half a loaf of leftover sourdough bread and, after liberal application of olive oil, sea salt, and black pepper, broiled it until golden to serve as our vehicles for garlic consumption.

The chicken was moist and delicately herby, while the garlic oozed out of its skins to top the toast, needing no convincing whatsoever.We suffered a few burned fingertips from our anxious efforts, but as you can see, that didn’t even slow us down. 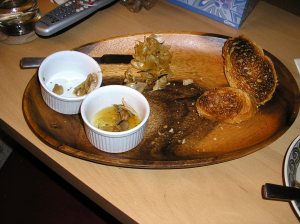 1 thought on “Slow and Steady wins the Roast”