One of the things I’ve learned about myself as a cook is that while I am very good at choosing, following, and accurately executing recipes, I am not particularly imaginative – or impressed by my results – without them.  To combat this, as should be clear from my recent exposition on lasagna, I have been paying closer attention to ingredient combinations on restaurant menus.  With more practice and likely greater culinary training than my own, chefs in restaurants have an understanding of how ingredients work together, and which ones will meld together well, which is something that I am still learning.

So, I have been taking notes and copying descriptions from meals that I enjoy and establishments that I have been impressed by, and trying to recreate them in my own way.  Inspired by the ridiculously beautiful shelves of greenery in the Raley’s grocery store in N.’s hometown, I wanted to make something fresh and delicious with plenty of produce.  We eat out quite a bit when we visit our parents, because with time to make the trip down to California only twice a year, it tends to be a festive week or two.  Therefore, one evening when N.’s parents were out bowling, my vision turned green.  There were bright, dripping bunches of broccolini, and rapini, and dandelion greens, and kale and turnip greens, and that was just the beginning.  I don’t think I’ve ever seen dandelion greens in a grocery store before, and was tempted, but forced myself to be realistic.  I thought back to our trip to Ashland in July, when N. had this:

Gnocchi in an herb, wine and garlic sauce, topped by a rosemary-grilled breast of chicken, bell peppers, and broccolini.  Inspiration achieved.  I grabbed both broccolini and rapini from the produce shelves, a beautiful orange bell pepper, and some pre-made gnocchi from the refrigerated area.  N. has been yearning after these pillowy little fluffs of potato pasta, so I was happy to oblige.

Surrounded by emerald leaves, buds, and juicy stems on the kitchen counter of my in-laws’ house, I chopped up the greens and steamed them briefly to reduce some of the bitterness that I know hides in these lesser-loved brassica hybrids.  When they were just tender, I drained off the water and moved them to a deep skillet, where I stir-fried them with thinly julienned bell pepper slices while the gnocchi boiled.  I added some garlic, and at the last minute tossed in the gnocchi, some leftover parsley from a previous night’s adventure, and a few small chunks of butter.  It wasn’t the most sophisticated sauce, but the colors were just gorgeous.  We topped our bowls with parmesan cheese and filled our bellies with vegetables. 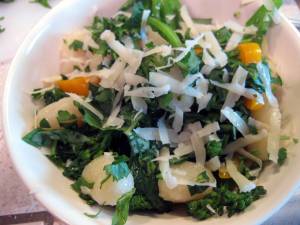 It was so simple, but so fresh, and the flavors were strong and tasty.  I like bitter vegetables a bit more than N. does, so to make this again I would steam the broccolini and rapini a bit longer, and perhaps in chicken or vegetable broth rather than water.  This would probably also make a silkier sauce, as would a dash or two of a full-bodied white wine.  However, this fresh burst of vegetables reenergized and refreshed us, and boosts my confidence about my plan of attack.  With N.’s Ashland dinner recreated, and three butternut squashes slowly swelling in the garden, my meal from the same night may be next on the “restaurant recreation” horizon.  Squash stuffed ravioli in a sage brown butter sauce with crumbled biscotti and gorgonzola cheese, anyone?