I know, I know, I broke my once-a-week resolution.  But you see, I have this exam hanging over my head.  It’s a two part oral examination that involves me reading a paper I’ve written about a 14th century poem, and a committee of three professors listening and then quizzing me both about the paper, and then in the second part of the exam, about medieval literature in general, based upon a hundred-or-so item list I have put together.  My exam is next Friday.  It’s a little intimidating.

But I don’t want to talk about that now.  I want to talk about salmon.  Even if you are not a seafood person, chances are you are okay with salmon.  It’s a beautiful fish.  It’s meaty and rich and juicy and can be cooked in a number of ways.  One of our treats in the last few days of the winter break was slow roasting a huge filet of it.

I had never experimented with slow roasting like this before.  Per my recipe’s directions, I stirred together brown sugar, sea salt, and a big handful of fresh, finely chopped dill.  I love dill.  It has this fresh green smell to it that makes me feel alive and happy, and mixing it with sugar had to be a good thing.  Once combined, I sprinkled the mixture over the fish and packed it in, rubbing and pushing the herbed sugar against the flesh so the flavors could penetrate.  Then I slapped plastic wrap over the top of my baking dish and stowed it in the fridge for 5 hours. 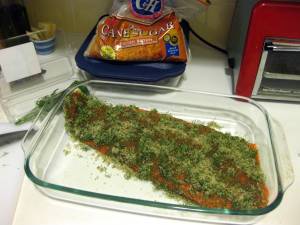 With eons to go before dinner, I preheated the oven to 175F, unwrapped the baking dish and transferred the fish to a cookie sheet before sticking it in the barely-warmed oven and leaving it for over an hour.  Over an hour!  For fish!  I could hardly believe it either.  Trusting in the recipe, I left it alone for what felt like forever.  After a time, the smell of roasted fish and caramelizing sugar started to fill the house, and this wasn’t a briny, salty, fishy kind of smell, this was almost like a thick roast of red meat.  Once in a while there was a crackling noise from hot fat oozing out of the fish and sizzling against the cookie sheet.

Meanwhile, I prepped our side dishes: barley simmered in chicken broth and a green salad of butter lettuce, cucumbers, and sliced avocado.  As the fish recipe called for a dipping sauce of mayonnaise and whole grain mustard, I made a salad dressing with the same two flavors, adding white wine vinegar to thin it out, and a drizzle of honey to prevent it from being too bitter.  Hooray for tying flavors together!

When the timer went off for the fish, I opened the oven door and despaired.  The little cracks in the sugar coating that I could see fish through looked bright pinky-red still, as if the fish was quite raw.  Gulping back disappointment, I gently flaked into the filet with a fork and almost had to pick myself up off the floor, where my knees were threatening to melt into a puddle.  The fish was perfect.  It was cooked, and the texture was silky but firm and buttery smooth. 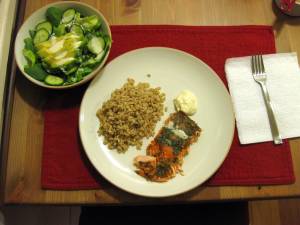 We ate.  The salmon was remarkable.  Though I only had it in the refrigerator for five hours (hey, we were hungry!) and the recipe called for eight, the meat was on its way toward the texture of smoked salmon, rather than baked or roasted.  I don’t know what the slow heat did, exactly, but the fish peeled off its skin in perfect fork sized chunks.  It was so rich and smooth that it was almost like eating a slice of warm butter.  The sugar surprisingly did not overpower the taste of the fish, and the mayonnaise-mustard sauce was tangy and added just the perfect touch of acid.  I was surprised that it wasn’t too creamy, with the silkiness of the salmon, the smooth mayonnaise, and the sweet sugar, but the punch of chewiness from the barley leant a nice contrast in texture, and the crisp butter lettuce and cucumbers in our salad didn’t hurt either. 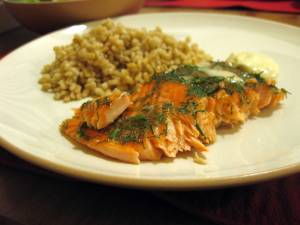 I think if the fish had chilled and marinated inside its sweet rub for a full eight hours before getting the slow heat treatment, the texture would have been even more pleasing.  N., who isn’t a big seafood fan, pronounced this a tentative success the first night, but the next day, when he had a cured salmon sandwich with thinly slice cucumbers, mayonnaise sauce, and a crisp leaf of lettuce on toasted sourdough, he was a complete convert.  We will have this again, when my exam is over and time operates normally again.  When I have time to devote to a dinner I begin almost ten hours ahead, and time to linger over it when it is finally, triumphantly ready.  Here’s the recipe I used, if you want to give it a try yourself.