This trip was extra special in the food indulgence area because we opted to stay at a bed and breakfast instead of the usual chain hotel.  At the Villa Heidelberg, our hostess serves what she calls a “hearty breakfast,” which consists of coffee or tea and fruit, followed by a hot dish that changes every day.  As we ate this hot dish the first morning – a croissant stuffed with Canadian bacon, cheddar cheese and sliced, cinnamon dusted apples, then coated in egg and baked until the pastry was even toastier and flakier than before and the apples were just softening – she explained that she has almost run out of room in her kitchen for her cookbook collection.  Other bed and breakfast establishments have five or six standby breakfasts they alternate between or cycle through, but she said that early in her career as innkeeper she got tired of making the same things week in and week out.  She keeps adding and adding to her repertoire, and with a side of maple syrup to absolutely drench this croissant in fantastic sticky decadence, we were well set to begin our adventures.

Despite this incredibly filling start to the day, when thoughts of lunch started to percolate as we strolled through Pike Place, I knew almost immediately what I wanted.  The smells in the marketplace were so good that you’d think it would be hard to decide.  But I knew.

The fish stalls here were impressive, and when I say that the place smelled like fish, I mean this in a positive way.  Even raw, the fish was so fresh and so reminiscent of the salty spray of the Pacific that even N. admitted it smelled good.  It didn’t hurt that the aromas of smoked salmon and fried seafood lingered around us as well, and this became my lunch quest: fried shrimp.

For $7.99, the sardonic but chatty expediter at one stall sold me this beautiful portion of beer battered and fried prawns with French fries.  It was like heaven.  Since N. doesn’t like shellfish, we never eat it at home.  Not only were these fresh, plump, perfectly toothsome prawns, but they were coated in delicious rich batter and fried until they had soaked in just the right amount of grease.  Enough to coat the fingers and shine suggestively in the corners of my mouth.  Not quite enough to weigh me down.  Perfect.  Well, perfect if I’d had a beer on the side.  Maybe a nice wheat beer with a generous lemon wedge.  And bringing the expediter home, where he would become our local bartender.  Then I could call it perfect.

Dinner this night was to be our belated anniversary dinner.  Since I’d just celebrated my birthday, I decided it could do double duty.  We chose Purple, a bistro and wine bar right downtown, and entered the enormous, dimly lit room slowly.  Solid heavy doors and ceiling to floor windows protected a huge spiral staircase winding around a column of shelves packed with bottles.

While I was still gaping at this collection of wine, we were seated and handed a binder full of beverage choices.  Our poor server had to come back three times to get our order, as I, still a bit of a wine novice, was completely intimidated by the gratuitous supply and tremendous number of options.  I selected a nice citrusy Gewürztraminer while N., always the beer man, had an Old Rasputin Stout.  He gave me a sip and I was surprised by its dark smokiness.

With so many wine choices, I was almost dizzy with the rush of having to choose accompanying food.  I get nervous at restaurants when I have a plethora of choices.  Do I opt for something comforting, familiar, guaranteed to be good, or do I branch out and order something that sounds adventurous – a startling mix of flavors that might be outrageously good… or a slight disappointment?  Here, though, I needn’t even have opened the menu; the first special on the front page was too good to pass up: risotto with roasted tomatoes, spinach, and Greek feta.

The poor quality here is due to the dim lighting, but I could just as easily claim it was thanks to my hands quivering from delight.  It sounds so simple, and as I looked down at my plate I feared I had been too cautious, but I was wrong.  The blend of flavors was stellar.  The rice was tender and flavorful, the tomatoes had sharp tanginess that matched well with the feta, and the whole thing had that unbelievable magical creaminess risotto gains from twenty minutes of tireless stirring while the rice grains – little sponges that they are – slowly suck in more and more broth.

While my fork danced around my plate, N. enjoyed a more hands-on experience, ordering a gorgonzola and fig pizza, replete with walnuts and rosemary, and a shy sprinkling of Parmesan cheese.  The thick purple slices of fresh fig looked so alien on pizza, as did the hefty chunks of walnut, but the finished product was tasty and intriguing.  In my plans for recreation, I may try making a rosemary foccaccia dough as a base, and then replacing the fresh figs for dried.

Because it was a special occasion, and because our server told us the desserts were “tapas sized,” we decided we had to splurge. 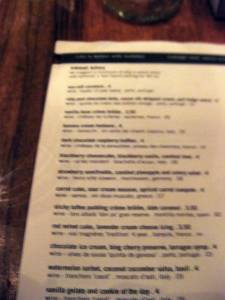 With options like these, there was simply no leaving before we had a sample or two.  We decided to share two desserts: the red velvet cake with lavender cream cheese frosting, and the blackberry cheesecake with blackberry coulis and candied lime zest.  Despite being barely bigger than golf balls, both were triumphant.  The cake was moist and rich, and the lavender sprinkled atop the frosting was an unexpectedly good touch.  It had a sophisticated flavor somehow and a light perfume, making this more than just good cake.

The cheesecake was rich and exceedingly smooth, and I found the perfect balance was a generous dip of blackberry coulis and a sliver of candied zest.  I like a bite of sour citrus with my cheesecake, and without that tart, slightly bitter chew, this perfect little cylinder might have been bland.  As it was, if I were slightly less polite I would have licked my plate.  Hell, I would have licked both plates.

Thanks, Seattle, you were that good. 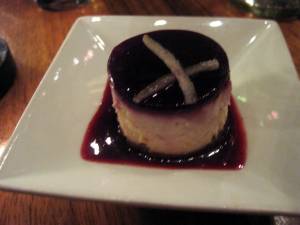