Shauna and Danny Ahern are my friends.  I don’t know them, we’ve never met, and though I read Shauna’s blog Gluten-Free Girl with a dedication that trips along the border between religious devotion and obsessive-compulsive disorder, I doubt she has ever glanced at mine.  I have drooled over the food (and made some of it!), I have laughed at her triumphs, I have felt my biological clock chime when she speaks of her daughter.  In late July, I sat on my sofa with tears streaming down my face, choking for breath as I read the beautiful story of her wedding.  As a writer myself, I admire her style, her skill with words, and her ability to talk lovingly, richly, thoughtfully about food, about family, about opportunity and love.  I feel like I know these people.  I wish I really did.

A few weeks ago, Shauna announced that along with the forthcoming publication of the cookbook/love story she and Danny “the Chef” wrote together (Gluten-Free Girl and the Chef: A Love Story with 100 Tempting Recipes, listed on Amazon at http://www.amazon.com/Gluten-Free-Girl-Shauna-James-Ahern/dp/0470419717), they were willing to share three preview recipes with interested parties.  I was, of course, one of these, and in a flurried email exchange, I suddenly had three brilliant recipes, replete with stories, to dance to in my little kitchen.

I ended up only making two of the three, mostly because N. doesn’t like shrimp, so a plate of seared prawns in almond garlic sauce did not sound appealing to him.  But if everything in the cookbook is as stellar in flavor and straightforward in instructions as the two recipes I did conquer over as many days, everyone should own a copy of this book, whether you eat gluten-free or not. 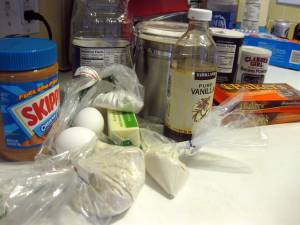 Friday night N. and I went to a last-hurrah-of-summer-bbq at the home of J., my birthday twin, and his partner HP.  Troubled by the notion of bringing the chocolate cake again (I’ve made it several times this summer already), I cast about mentally for another idea, and there was the pdf recipe for GFG’s chocolate peanut butter brownies.  My mouth started to moisten.  Chocolate, butter, sugar, peanut butter, and my first experimentation with xantham gum?  Yes, thank you, I think I will! 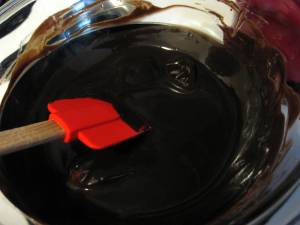 As brownies go, it was a fairly standard procedure of careful melting, mixing, swirling, baking, but oh the delight of tasting!  In the short section about the recipe preceding the ingredient list, the words “Reese’s Peanut Butter Cup” appear.  They aren’t kidding.  With the peanut butter swirled gently into the deep chocolate batter (and there is no other word for the color than that: chocolate) and my fingers cautiously tasting stray blobs of batter, I wanted to stop and eat the batter.  Half of it would bake up just as nicely as the whole pan, right?

I resisted, and slipped the dish into the oven, relinquishing it from sight for half an hour.  Still tasting the batter, I could detect a slight grainy texture that I attributed to the alternative flours used (my previous experimentations with gluten-free flours have not always been great, but they have always been grainy), so I was a little worried about that.  But after the pan cooked, cooled, and came to the party with me, my concern lifted.  I wouldn’t have had to tell anyone these brownies were gluten-free.  I wanted to, because I must admit I wanted to brag a bit about participating in this project (and get the word out there!), but there was no explaining to do.

Oh Shauna.  Oh Danny.  The taste!  The crumb was rich and moist, the pockets of peanut butter were sticky bombs of candy-like delight.  I couldn’t even get a photo in before the hordes descended on the pan.  Seven people decimated ¾ of the pan in ten minutes.  Almost everyone went back for seconds.  Ever thoughtful of my not-so-narrow waistline (and hips, and thighs, and butt), I generally try to leave leftovers at other people’s houses when I choose dessert as my contribution to a meal.  Not this time.  The remaining brownies came with me, clasped tightly on my lap as we drove home in the rain.

Saturday, I ventured out into the weather again to pick up a few last ingredients for my second dance with Gluten-Free Girl and the Chef; it’s hard to make a pasta dish containing lemons, olives, anchovies and pine nuts when you don’t have lemons or pine nuts in your kitchen.  I grumped to myself as I walked to the store and back.  Why did I need this stuff?  I knew I shouldn’t, but it would just be easier to substitute ingredients.  The brownies had been good (liar, understatement of the century!), but this was just pasta.  I could post about the brownies and leave it at that…

I was so wrong.  With water for brown rice pasta considering coming to a boil, I prepped ingredients and tried to imagine what this was going to taste like.  N. had already been frightened by the idea of anchovies, and I knew he was envisioning a cheap pizza draped with little fishy bodies.  I told him that Shauna and Danny said not to be afraid.  He said “hmph,” which meant he was unconvinced.  He doesn’t know Shauna and Danny like I do.

With the toasty, nutty perfume of not-quite-burned pine nuts still lingering in the kitchen, I sautéed a collection of vegetables in my biggest skillet, hurriedly chopping and slicing in between stirring sessions.  I’m always too anxious to cook to bother readying all my mise en place before scraping a boardful of ingredients into the pan.  At the point that the roughly chopped mix of olives I’d kept stowed in the back of my fridge and the finely chopped little fillets of anchovy hit the pan, I felt my knees buckle.  The smell was incredible.  When I added capers and lemon juice, I had a Proustian epiphany of Corsica, of Greece, of Spain.  Except I’ve never been to Spain.  Or Corsica.  Or anywhere in Greece.  It was just a strong enough, rich enough, delicious enough smell that it lifted me from the stained hardwood floor of my kitchen and transported me onto some magical different plane of Mediterranean glory.

Carefully twirling the pasta through sauce, I had to be careful not to drool on it.  These flavors: is this umami?  It was almost more than I could manage to mix in pine nuts, lemon zest, a clumsy chiffonade of basil – I just wanted to eat it straight out of the skillet.

We sat down to eat.  I tried to do one of those perfect forkfuls where you get a tiny sample of everything.  I tried to think objectively about what I was about to experience, about what vocabulary I would use to describe it, about how I could speak like a food critic about it.  I don’t know how.  Here are my words, all I can manage: earthy.  Warm.  Salty-bright-tangy-acidic-perfect.  Briny.  Tart.  Meltingly rich.  Flavor bomb.  Somewhat reminiscent of chicken piccata, but deeper, richer, earthier, nuttier.

And N.?  He scraped his plate.  I asked him what he thought so I could make a report.  “It was excellent.”  As I’ve written before, N. is generally restrained in his verbal praise of food.  And this was “excellent.”

I’ve never bought anchovies before.  I might never allow them out of my pantry again.  This recipe, whether we use gluten-free pasta or not, will fast become one of my staples.  For me, it’s too distinctive to have all the time.  It’s too special.  But for those nights when I need something powerful to wake my taste buds, when I need something that makes my mouth feel alive, this is it.  This was like eating a tango.

Go to a bookstore.  Order Gluten-Free Girl and the Chef: A Love Story with 100 Tempting Recipes.  Rejoice in the story and in the recipes and in the wonderful opportunity to eat really, really good food.  Dance in your kitchen.  And then tell me about it.  And tell Shauna.  I know she’d want to know.