On some Friday nights, after visiting a bar near campus where we share Happy Hour with folks from our department, N. and I stroll back to the parking lot where we’ve left our car, arm in arm and happy to be starting the weekend together.  We approach the lot, now almost empty of cars, only to find it occupied by three or four large, noisy, overstuffed school buses, jammed to the gills with undergrads in disco dresses, in plastic pants, in formalwear and stacked heels and spiked hair and too-short skirts.  Last week there were a few girls in lederhosen.  They are from fraternities and sororities, heading out to formal nights or costume nights or party-till-you-forget-who-you-are nights, and we have to skirt around the buses in our car to escape from the parking lot and head home.

The lederhosen last week got me thinking: I’ve seen a definite shortage of togas among these party-goers (and I’m not just punning on the shortness of skirts here), replaced by lots of skimpy costumes.  It made me wonder whether they know that the tradition of fraternity toga parties is from the designation of these organizations as “Greek.”  Do they recognize this connection, or have they made the leap that togas are costumes, but there are lots of other costumes, so let’s just have a costume party?

I was never a sorority girl, and though I love a good costume party, I haven’t yet attempted the complex transformation from innocent white bed sheet to Classical garment.  Togas are one thing, but this week’s Bittman choice is, to me, a much more enjoyable way of going Greek.

“62. Spinach-Cheese Pie: Sauté chopped garlic and two pounds of chopped spinach in plenty of olive oil until wilted and tender.  Remove from the heat and stir in ½ to ¾ cup crumbled feta or firm goat cheese, and a tablespoon chopped dill or mint. Layer 5 sheets phyllo dough in a greased baking dish, brushing each one with olive oil before adding the next. Spread the spinach over the phyllo, then top with 5 more phyllo sheets, each brushed with olive oil. Tuck in the edges if they extend over the ends of the pan, slash the top of the pie diagonally in a few places and bake until golden brown, 30-40 minutes.”

This is basically spanakopita, so I knew from the beginning it would be good.  With the addition of 3-4 thinly sliced green onions and liberal seasoning of salt and pepper in my spinach, I followed this unusually precise almost-recipe to the letter.  Here’s what I used:

2 10 oz. packages frozen chopped spinach, defrosted and very well drained (I know this isn’t two pounds, but it’s what I had in the freezer)

I forgot to snap a shot of the filling before tucking it in, but the fully constructed “pie” was lovely.  I opted not to fold under all the edges after layering up in a baking dish, because I love that crunchy paper-thin crispness exposed edges of phyllo take on in the oven.  Messy sheets are not always a bad thing.

I let the crisping, warming, melting, softening happen for 30 minutes in an oven preheated to 375F, and readied our soup course.

To contrast the green and soft matte golden brown of the spanakopita, I turned to a frozen friend: butternut squash soup from this fall, which we’d consumed half of and stashed away the remainder for a lazier day.  I plunked the solid orange disk into a pot and added a splash of roasted garlic-infused chicken broth to loosen it up a little (the original batch had been more like a puree than a soup).  Then I left it to its own devices on medium low until sluggish bubbles were forming and the spanakopita was golden and done. 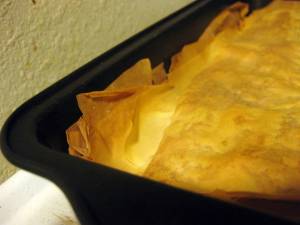 This is why I love phyllo: look at those edges!  Fragile shards of flaky crunch where the edges protrude alone, but the soft tender feeling of pastry on the inner layers.  I decided I like the flavor and texture of butter between the sheets slightly better than olive oil, but this way was probably better for us.  Butter just adds additional richness.

This was so tasty, and so surprisingly light that we were glad of the soup as a hearty accompaniment.  The phyllo really does give the impression, when it is layered together like this, of a thick crust, but it is so thin and fragile that it’s almost like having no starch at all in the dish.  The spinach, dill, and feta mixture is the perfect blend: green hearty healthy tenderness from the spinach, bright freshness from the dill, and crumbly tart salty brine from the feta interspersed amidst the vegetation.  If you didn’t want to take the time with the phyllo, this would also make a great quiche filling, or a Mediterranean option to pack into stuffed mushrooms.

The feta was so good in the spanakopita itself that I thought it would make a nice topping for the soup, brightening the slow comforting sweetness of the squash and potato mixture.

It’s good to be right. 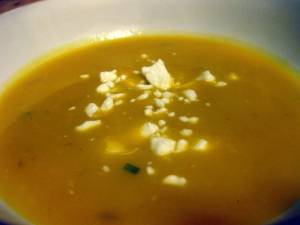