When I was a teenager, my aunt gave the family a book of board games.  There were little flat pieces that looked like mancala stones to play the games in a zip-up baggie that hung off the spiral binding of the book, and lots of games we had never heard of and, in truth, some that we never ended up playing.  In fact, after some experimentation there was only one game that ended up being played with any regularity.  It was called “Dalmation Pirates and the Volga Bulgars,” and featured a board drawn over a beautiful clay-sculpted background of waves a tiny town, and even a Playdough-looking sea serpent.  The objective was for the 24 pieces representing the pirates to try and occupy completely the nine spaces representing the town.  The objective for the Bulgars, of course, was to prevent this from happening by capturing (through jumping pieces, like checkers) enough Pirates to make their occupation impossible.

I was never a fan of checkers or chess, or even Othello, because I wasn’t very good at them and didn’t like the idea of investing enough losses to learn the game well and begin to excel, but for some reason this Pirates vs. townspeople game appealed to me.  I played it with my dad, and I always wanted to be the Bulgars.  Maybe I liked the art surrounding the game, maybe I liked the fact that it was new to both of us, but something about it appealed, and I was good at it.  My defense of my town was of paramount importance, and my land- and sea-going people-pieces were strong and resilient and very fond of capturing pirates.

This seems like a strange way for a food-related post to begin, and indeed my memory is based on homophones, not homonyms, but this week’s Bittman choice reminded me of this old favorite:

“49. Halve and seed acorn, butternut or delicata squash and roast until squash begins to soften. Meanwhile, cook bulgur, drain and toss with coarsely chopped pine nuts and currants. Add a bit of the stuffing to each squash half and sprinkle with cinnamon. Bake until squash is tender.”

I don’t cook bulgur very often, but every time I hear the word, see the word, think about this hardy, tasty grain, my mind goes not to the food itself, but back to a winter afternoon, sitting on the floor in the living room with my dad, playing “Dalmation Pirates and the Volga Bulgars” in a room only recently divested of shreds of wrapping paper.  It’s that kind of fond memory.

With the autumnal flavor combinations in this dish, I could see it accompanying a game of Pirates vs. Bulgars quite nicely.  Here’s what I used:

1 acorn squash, halved, seeded, and balanced by cutting a thin strip from one of the ridges to help it stand up

1 tsp cinnamon or to taste

After prepping the squash, I nestled them against each other in a 9-inch metal cake pan, salted and peppered the inside well, added probably ½ TB of butter to each well, and stowed them in the oven, which I’d preheated to 375F.

While the squash began making, I prepared the bulgur.  I used 2 ½ cups of water for my 1 cup of bulgur, and tossed in 2 TB of butter just to add some richness.  Preparing bulgur is like a combination of rice and couscous: you allow the water to come to a boil, then add the bulgur and cook until the water is absorbed and the grains are tender but still chewy.  It took about 25 minutes. 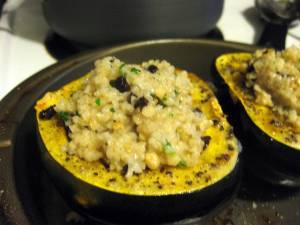 When the bulgur was done, I stirred in the pine nuts, currants, and parsley, which is not on Bittman’s recipe but which I had kicking around in the fridge, begging to add some color to something.  I excavated my squash babies from the oven, basted them up the sides a bit with the now-melted butter in their cavities, then filled up those caves with a few mounded scoops of bulgur stuffing.  I sprinkled the top with cinnamon and then, spurred perhaps by watching too much Paula Deen on the Food Network, halved my last TB of butter and pressed the little cubes gently atop each mound of stuffing.

My Bittman Bulgurs went back into the oven for about 20 minutes while I prepped the rest of our meal: chicken basil sausages and sautéed greens.  Trader Joe’s occasionally has a tremendous sack of mixed “southern” greens including mustard greens, turnip greens, and a few other shreds of deliciousness that I like quite a bit.  Taking my cue from last week’s green bean triumph, I blanched a big pot of these greens for a few minutes, scorched off my sausages, then added the drained greens to the sausage pan, where they sizzled insistently and picked up some meaty flavors.

When I dared to peek at the squash boats, and tentatively poked down into their hopefully-now-softened flesh with a fork, I found the stuffing had taken on a crunch-promising-crust and the squash beneath was achingly tender.

When we dug in, cracking through the crunchy tip of the stuffing pinnacles and scraping the soft orange squash beneath it, I wasn’t sure what to anticipate.  The cinnamon idea was throwing me off.  Even though there was no added sweetener, the cinnamon gave off warm spicy dessert tones, and I think I was expecting that to clash with the squash.  But I had forgotten, somehow, momentarily, that propensity of squash to collect flavors and, chameleon-like, transform itself from a savory item to a potential dessert.  And yet here, while it blended well with the cinnamon and the currants, neither the stuffing nor its vessel read dessert.  They were just warm and comforting, with the surprise spice and crunch on top to add excitement.  The bulgur was still slightly chewy, with that golden nuttiness whole grains so often have, and I considered that if you wanted to make this gluten-free, you could use brown rice or quinoa with fairly similar results.

Packing up the remains of dinner, I realized with delight that one slightly manipulated half of acorn squash fits perfectly in one of my round Tupperware containers.  I wedged it in carefully, added a bit more stuffing, and offered it a benediction: “Good night, Lunch.”