Twice a year (approximately), a truly embarrasing-to-admit-you-are-obsessed-with-what-with-being-an-intelligent-and-well-educated-woman reality television show starts a new season.  And I MUST watch it.  And I don’t watch it alone (most of the time).  Several female friends are also implicated in this shamefulness, and because the show involves large quantities of too-skinny women, we like to pair our guilty viewing sessions with dessert.

As a new season of this show recently started, I thought this would be a great opportunity to breach the dessert section of my Bittman project.  With Pink Lady apples on sale during my weekly pilgrimage and foggy (but accurate!) memory of a bag of cranberries, frozen in November, jammed in the back of my freezer, everything came together. 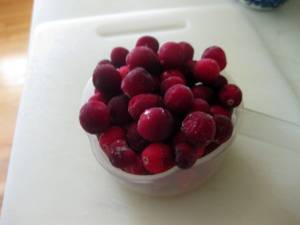 “99. Apple-Cranberry Crumble: Peel and slice 4 large tart apples.  Toss with a cup of cranberries, the juice and zest of a lemon and ¼ cup brandy, apple cider or water and put into a buttered baking dish.  Pulse ½ cup cold butter, ½ cup oats, ½ cup walnuts or pecans, ½ cup flour, ¾ cup brown sugar, 1 tablespoon cinnamon and ½ teaspoon ginger in a food processor until crumbly – not fine.  Top the fruit with this and bake until bubbly, about 45 minutes.”

Because I did almost exactly this, and because the quantities are listed here, I’m not going to type out an ingredient list – it would be very repetitive.  But I will tell you the changes I made, due to ingredient lack and personal preference, and which worked out well.

I didn’t have brandy, so I used spiced rum instead.  Because the apples were mouth-wateringly tart and the cranberries relentlessly so, I decided to divide the sugar and put about ¼ cup in with the filling, leaving only ½ cup in the topping.  This still rendered a very sweet topping, especially on the leftovers ice cold from the fridge.  I think I pulsed the topping too much, because what resulted was almost like graham cracker crumbs.  I exacerbated the cookie-like texture because, using a pie pan clearly too small for all this goodness, I patted the topping on fairly firmly to keep everything together.  I think a 9×9 square baking dish would be the right size for this dessert. 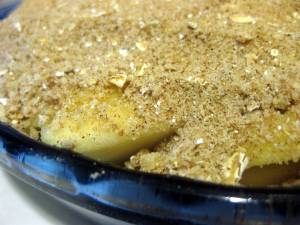 I preheated the oven to 350F for this, because it’s a fairly standard temperature for desserts and Bittman doesn’t specify.

Perhaps because the topping was packed on so tightly, or because the Pink Lady apples I used were less juicy than Granny Smiths, which is my usual pie apple, 45 minutes later there wasn’t much bubbling.  The topping had, however, turned golden and crispy, and the smell of apples and cinnamon mixed with a tantalizing tartness had permeated the house.  I’ve discovered in the past year that all those Food Network chefs who tell you doneness can be determined by smell do have a point.  It smelled ready, I decided it was done, and my nose and I were right.

When I served this, spooning tender apple slices stained with juice from the popped cranberries and blanketed with a crunchy, cookie-like layer of awesome, one serving proved not enough.  In fact, between me, the two ladies I was sharing with, and N. when he sneaked through to pick up dessert near the end of the show, we devoured about ¾ of this simple, homey treat in one evening.  And we didn’t even have ice cream on the side. 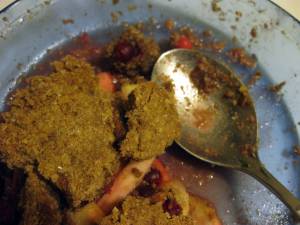 Clearly, my assessment on this pick is that it was fantastic.  Easy ingredients, easy to make, and so difficult to mess up that it can be served to company the first time you attempt it.  Pleasantly, the apples maintained a bit of texture even after almost an hour in the oven.  The rum was soaked up and cooked off, leaving only the barest tingling spice that went well with both the apples and the cranberries.  Even with the addition of brown sugar in the filling and the richness of the crumble, the cranberries and lemon kept the whole dish feeling very bright.  It made me think that with more cranberries, smaller pieces of apples, and no topping, this could be a delightful take on cranberry sauce.

As these things so often go, and as good as our first decimating exploration was, this dish’s debut was not its best showing.  Rather, two days later when I needed a pick-me-up and saw the aluminum foil covered pie plate balancing unsteadily atop several stacked Tupperwares, I discovered its chilly waiting period had brought it to perfection.  The apples were incredibly flavorful, the cranberries were still tart but had mellowed into something resembling sweetness, and the crumble on top was like a cinnamon-scented crust on the best New York cheesecake you’ve ever had.  So delicious.  And really, as good as the apple and cranberry pairing was, I see no reason this topping couldn’t be patted over other types of fruit.  Pears and raisins, if you added a little nutmeg to the topping, would be stellar.  Plums, peaches, maybe even cherries, could happily burble away under such a glorious blanket.  And though next time I might pulse the topping less and sprinkle over the fruit rather than pressing, this is a dessert I will not forget to make again.  Maybe every time a new shameful viewing season begins. 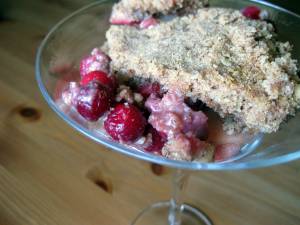