I was not a picky eater when I was a child.  I liked almost everything, and I was willing to try probably 99% of what I was offered.  I liked vegetables, I liked fish, I liked salsa, I liked avocados… I liked food. 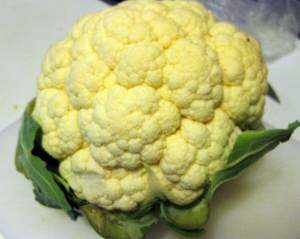 One of the few items that did not please my palate was cauliflower.  My mom always steamed it, and even smothered in a cheese sauce it had this musty, boiled cabbage flavor I couldn’t stand.  It felt mealy in my mouth and it looked pale and unappetizing: horrible vegetable brains I wasn’t supposed to gag over.

Recently, however, I’ve discovered roasted vegetables.  Well, I knew that if you cut root vegetables into chunks, doused them in olive oil, salt and rosemary and roasted them for almost an hour the result would be tender starchy delight, but I hadn’t done much with other victims.  Potatoes?  Yes.  Carrots and onions wedged in next to a leg of lamb?  Sure thing.  Asparagus with some lemon juice and delicate, bursting cherry tomatoes?  Definitely.  Cauliflower?  I was doubtful.  Until a few months ago.  I found a recipe for slow cooked “tandoori” chicken with a side of roasted cauliflower, and my husband’s pleading eyes convinced me to try it.  Liberally soused with olive oil, coriander and paprika, trapped in the oven at 450F for the better part of an hour, cauliflower became amazing.  Its cut surfaces deepened to mahogany and took on the appearance of that burnt sugar crust atop crème brulee.  Its florets got rough and crispy and, as I described to my slightly incredulous sister, became like cauliflower popcorn.  And I liked it.  With sea salt on top it was outrageously good.  N. and I plowed through a whole head of it by ourselves that night.

So I was okay with this week’s Bittman.  In fact, I was pretty excited.

Not only was this – according to my new, cauliflower-appreciating minset – a delectable-sounding collection of ingredients, it was really easy.  I readied: 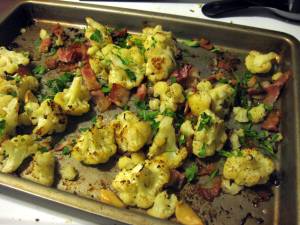 Ordinarily, I tell you what I did and then comment on it.  Here, I’d like to do the opposite.  I followed Bittman’s directions and, whether it was because I cut too large of pieces or because I overcrowded my baking tray, at the end of 20 minutes at 400F, my cauliflower was overcooked and my bacon was barely past raw.  I hiked up the heat and left it in for another 15 minutes, anxiously checking while we scarfed our side dish to hold back our hunger, which the smell of slowly-rendering bacon does nothing to assuage. 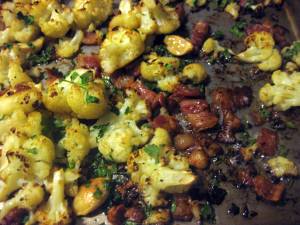 When it was finally done, with deep crinkly bits on the cauliflower and glistening bacon fat making the pan slick, I tossed on some parsley, scooped huge helpings onto our plates, and we collapsed into it.  It was good.  The blend of flavors was really wonderful.  The mild cauliflower, made almost sweet by its roasting treatment, was helped along by the smoky saltiness of the bacon, and when you got a garlic clove in there as well, it was magic against the taste buds.  The problem was in the texture and execution.  Because it had already been steamed, and because I had to add extra cooking time, the cauliflower was essentially the texture of mashed potatoes.  This might be acceptable in some cases – in fact, I’ve read recipes that call for pureed cauliflower as an addition or flat out replacement for mashed potatoes – but that wasn’t what this was supposed to be about.  I wanted some vegetal resistance against my teeth.  I wanted tenderness and give inside a golden shroud, but something still lingering to slice through.  This was all softness.  So here’s my procedure suggestion:

Toss the raw cauliflower florets and the garlic cloves in olive oil and arrange in a single layer on a baking tray or cookie sheet.  Pepper them well.  Add the bacon, still trying to keep everything in a single layer and evenly distributed across the pan.

Roast for 20-30 minutes, checking frequently after 20 minutes, or until bacon is cooked through and cauliflower is dotted with crisp with golden-brown edges.  When desired doneness is achieved, sprinkle with fresh parsley and serve. 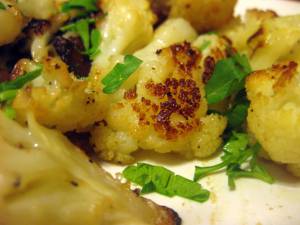 This might be a delicious side with some grilled salmon and a green salad, or as an alternative to french fries alongside a burger.  We had ours, I must admit with slight shame, paired with Stouffer’s boxed stuffing.  I did cook it with homemade chicken broth, but the packaged cubes of something-that-once-resembled-bread and dried, barely reconstituted onion bits remained the same.  Sometimes you need some shameful comfort, and these red boxed Thanksgiving classics are what does it for me.

With cauliflower in my “might be love” file, at least when it’s roasted till its whole constitution seems altered, my list of foods I don’t care for – short to begin with – is becoming almost nonexistent.  There are some processed foods I don’t like, but I’m not going to feel bad about that or try to develop a taste for them.  “I’ll eat anything” doesn’t need to include mushy canned green beans or frozen pasta with pellets of sauce.  When it comes to food – whole, natural food – I can now safely say, with very few exceptions, just to be safe, I like everything.