This week my shopping list was a bit wonky.  I was buying food for a party, and the idea that we might have to, you know, eat this week went to the wayside.  I never once looked at my Bittman options.  I bought nothing to make one of his meals. 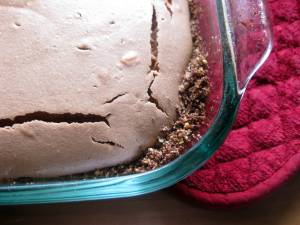 So I beg you to indulge me, as I present something a little different.  Indulge me my favorite indulgence: cheesecake.

For this recipe, I’d love to get some feedback.  I’ve never made a cheesecake before, let alone one impregnated with Nutella.  I don’t usually like “stuff” added to my cheesecake, but inspired by the frosting on Tartelette’s Nutella cupcakes crafted for World Nutella Day, I thought this one might just be okay.  If you make this, please let me know if you change anything and how those changes work out.

(some measurements are approximate)

In a food processor, pulverize the hazelnuts until very fine – almost a meal.  Add graham crackers, salt, and sugar and grind until everything is homogenous and very fine.  With food processor running, dribble in melted butter and pulse until crumbs are moistened and clumping together.  Dump out into the baking vessel of your choice (I don’t have a springform pan, so I used a 9X13” glass baking dish.  I don’t know how these amounts would correspond to a springform pan).  Using your fingers or the curved bottom of a measuring cup, tamp down the crumbs into a crust of uniform thickness over the bottom and partway up the sides of the vessel you have chosen.

I did not pre-bake the crust, and because it ended up a little crumbly I suspect one of two things could be improved: either it needed more butter to hold it together, or it needed to be pre-baked.  If you do one of these things and have desirable results, please let me know so I can amend the recipe!

Set crust aside while you whip up the filling.

all ingredients should be at room temperature

In the bowl of a stand mixer (or in a large bowl with an electric mixer), beat up the cream cheese until very fluffy and well combined.  This may take a few minutes – don’t skimp on this part because it will ultimately result in less uniform filling.  Scraping down the sides several times during the process is helpful to catch any unblended cream cheese hiding out on the edges of the bowl.

When cream cheese is very light and all has the same consistency, scrape down the sides and add the Nutella.  Beat again, and again be sure it gets fully incorporated so there are no pockets of plain, unblended cream cheese.

Add vanilla and sugar to taste, and blend again until very well incorporated.  Because the Nutella is already sweet and the crust is sweet, start with ½ cup of sugar and give the filling a taste before adding more.  It may be sweet enough for you with only ½ cup.  If not, add more, blend again, and taste again until you are satisfied with the sweetness.

With the mixer running, add the eggs one at a time and wait until each is fully incorporated before adding the next.  Again, be sure to scrape down the sides of the bowl to be sure the filling is of homogeneous texture.  By the time the last egg is incorporated, the mixture should be pourable and slightly soupy.

Pour into the room temperature crust.  If you pre-baked the crust, let it cool (or pop it into the refrigerator for a few minutes) before adding the filling so you don’t start cooking the filling before putting it in the oven.  This would result in an unevenly baked product, which is not what we want.

With all the filling on top of the crust, spread it out a little with a spatula to be sure it forms an even layer.  You may want to lift and tap the whole baking vessel on the counter a few times to help the filling evenly distribute, settle, and release air bubbles (this is good to do with cake batter as well).

Stow your precious vessel in an oven preheated to 350F for about 45 minutes, or until the center is just barely set (you should be able to touch it very lightly and come away with a clean finger, but it should still look the tiniest bit wobbly when you gently shake the pan).  Don’t be afraid to take it out at this point – I left mine in the oven with the heat off and the door open for an extra ten minutes because I was afraid it wasn’t done, but this resulted in big cracks around the edges of the filling, which means I overcooked it.

Let the cheesecake cool completely on a rack on your counter-top (away from the heat of the cooling oven), then cover it, put it in the refrigerator, and chill for a few hours to help it set up.  Remove, slice, and serve, and don’t expect the leftovers to last very long.  It’s very rich, it’s very chocolaty, and it’s very, very good.