As you might be able to tell, I’ve been busy.  School starts soon, the weather can’t decide whether to be summer or fall, and it seems like every thoroughfare in our town is under construction, with completion dates uncertain.  Somehow, this state of construction has incorporated itself into my life.  Most of my projects are far from done, and some have yet to be started.  When that happens, blogging goes awry, or at least gets pushed onto a sidewalk somewhere out of the way of the steaming hot asphalt I’m trying to spread evenly across my academic life.

Anyway, with ground turkey in the freezer and a desire for protein in our hearts, we decided on this Bittman pick last week:

“30. Cook brown rice until just shy of done. Drain and mix with an equal amount of ground turkey and a little chopped fresh sage and chopped dried cherries. Form into patties and sauté or bake, turning once, until crisp and cooked all the way through.”

Sounded easy and filling and delicious.  I amassed: 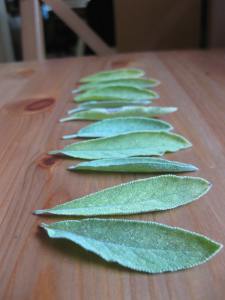 1.25 pounds ground turkey (mine was frozen, so I defrosted it but it was still SO cold!)

I cooked the brown rice in my rice cooker with two cups of water – a little shy of ideal so it would remain slightly underdone.  Then I let it cool until it was room temperature so it wouldn’t be a.) too hot to touch, and b.) so hot that it started cooking the turkey. 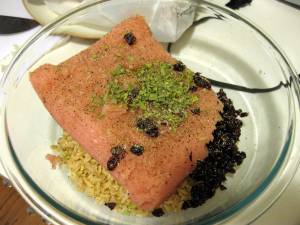 With cool, cooked rice, I just combined all the ingredients in a glass bowl and combined them with my fingers, working to incorporate the rice and turkey, and trying to distribute the cherries and sage evenly throughout the mix.

I formed the mixture into ten patties, each about the right size to fit nicely onto an English muffin (guess how we ate the leftovers!), then deposited them a few at a time into a preheated skillet containing a few tablespoons of olive oil.  Though I could have jammed them all into the skillet at the same time, this would have resulted in a big turkey pancake, which doesn’t sound delicious.  Rather, distribute the patties so they aren’t touching one another, which will give them room to brown.

After about five minutes on each side, I popped the burgers onto a plate so we could pop them into our mouths.  We had them alongside a salad of spinach, arugula, dried cherries, toasted walnuts, and chunks of cheddar, and they were tasty.  The sage added that dusty smokiness that suggests harvest and fall and Thanksgiving, and the cherries were chewy little morsels of brightness with a perfume-y, candy burst. 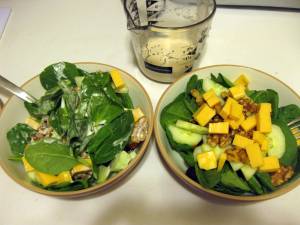 The only problem with these patties, as is often the issue with turkey, is that they ended up a little dry.  I don’t think I overcooked them, though I suppose that could have been the problem.  Rather, I think leaving the rice slightly underdone caused it to wick up the minimal moisture the turkey had.  The result was quite good, but not as moist as we’d hoped. 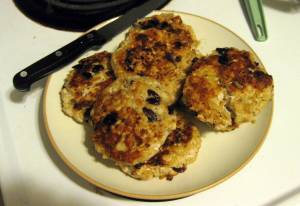 However, it was as leftovers that these patties really shined.  I reheated them for lunch sandwiches in a little pool of chicken broth, which I spooned over them as they warmed.  This added some much-needed moisture and prevented them from cooking much more.  We layered them into toasted English muffins along with arugula, cheddar cheese, and just a touch of mayonnaise.  Divine.