As you can perhaps intuit from the title of this post, this month’s Twelve Loaves challenge was just that for me: a challenge.  Called upon to incorporate stone fruit into a bread item, my mind went in a thousand directions at once and came up blank.  For me, stone fruits belong in pies and cakes.  The idea of combining cherries, or peaches, or apricots, or nectarines with the slow, yeasted rising of a bread was an odd one (although now that I’ve considered it, chocolate and cherry bread sounds fantastic.  Inspiration, if anyone still needs an idea for this month?).  So I struggled.  I wrote down ideas that sounded like madness:

Plum cobbler  not really a bread.

Peach upside down cake  not a bread at all!

And that was where I landed, nibbling at the edges of this idea.  It would be, I decided, a skillet bread: fruit caramelized in the bottom of a cast iron skillet, soda bread dough mounded atop it and then baked and flipped, like the weirdest version of a pineapple upside down cake bread you’ve ever heard of. 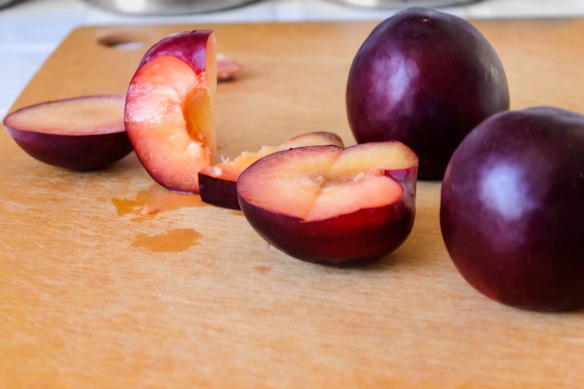 Once this weirdness was determined, I settled immediately on plums as my fruit choice.  I always forget how much I love plums as a cooked component.  None of the insistent fuzziness of peaches to deal with, but bursting with juice, brightly veined, and hiding just the right hit of tartness in that secret microscopically thin layer between skin and flesh.  I love that part. 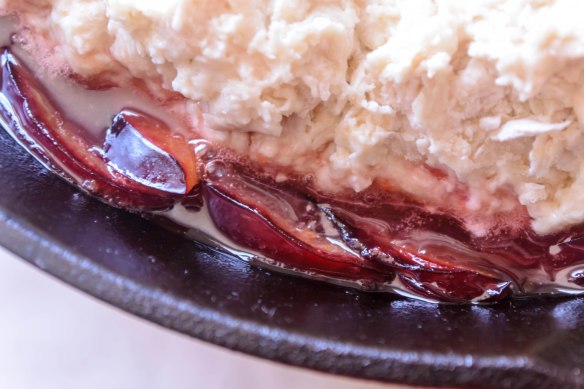 I envisioned bubbling slices of that sweet tartness in a slick of butter and brown sugar, mounding on heaps of gussied up Irish soda bread dough and baking the whole thing into a puffed, flippable cake/bread to have for breakfast, afternoon “tea” (N. and I rarely drink hot tea in the 3pm hour, but love the idea of stopping for a bit of a snack), or maybe even wedges wrapped up in wax paper to take on the road as we head into vacation.

What I got was a stunner-in-progress.  I’m going to give you the recipe for exactly what I made, but I know this is not the final iteration of this dish for me.  The plums were perfect: juicy, melting into the caramel and the bottom of the bread, sticky and jammy and reminiscent of a triumphant batch of plum butter my mom made one summer with pounds and pound of plums delivered to our door in a brown paper bag straight from a neighbor’s tree.  The bread itself was good: solid Irish soda bread, a little richer and a little sweeter from the addition of brown sugar, extra butter, and an egg, perfect for the breakfasts and snacks I envisioned, and better the second day than the first.  But as I dug in, I found myself wanting the bread part to be more like cake: more egg, less flour, a hint of vanilla or nutmeg or maybe cardamom.  The plums were so good, so gloriously gooey and tooth-sticking-ly caramelized, that they deserve a proper dessert – something you can watch a scoop of ice cream melt over.

Make this.  It’s solid and scrumptious: the perfectly not-too-sweet energy boosting slice.  But consider yourself warned: this won’t be the last time you see upside down plum something here…

2 cups cake flour (this adds some lightness – if you don’t have cake flour, you can use all AP flour instead with slightly denser results)