We are now, with one exception that you’ll see in a week or two, deep into the butter portion of this sauce project. It makes sense. Most of the big deal “mother” sauces are French, and the French do have a soft spot for butter. And that makes sense too. I mean, all you have to do is melt a few tablespoons of butter and you’ve already got a sauce. Think of the way it softens with the maple syrup on your pancakes, becoming something so much richer and more complex than either would have been by themselves! So let’s talk about some buttery details for a minute, and then I’ll take you to our sauce this week: meunière, a classic butter and lemon sauce specifically intended to be served with a sautéed filet of sole.

As I continue to learn about sauces, I’m seeing emulsion after emulsion. A fat bound to a liquid, often with some thickening agent that gives body to the sauce and helps the normally separate ingredients get along. Think vinaigrette: the fat is the olive oil, the liquid is the vinegar. Dropped into a glass together, they form distinct layers. But beat them vigorously, often with a dollop of mustard to help them blend, and they become a thick, rich dressing. Kitchen magic. 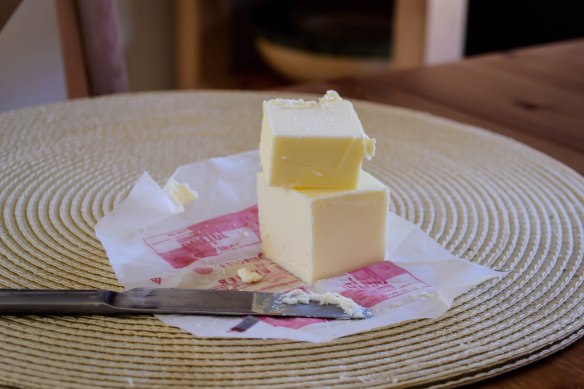 What I’m finding quite interesting about butter is that whole butter, the sort we buy in paper-wrapped sticks, is in fact an emulsion in itself. The butterfat, which is what solidifies when milk is churned, is the fat portion. But there is also some water in butter, and there are milk proteins too, which stabilize the emulsion. So in that one stick you have a liquid component and a fat component, hanging together in stasis.

When you brown butter, that darling of savory and sweet concoctions alike, several things happen. First, as the butter melts and bubbles furiously, you are seeing the water content boil off. If you stop at this point, skimming off any solids on the surface and reserving just the molten gold of the butterfat, you have clarified butter. But if instead you keep cooking it, the milk proteins that once acted as emulsifiers start to toast, and become deeply bronzed, and you have brown butter. You can even see those proteins roasting and browning in the photo above.

Meunière sauce capitalizes on brown butter. And with the water content of the butter boiled off, it needs a liquid to play with again, so we add the tart brightness of lemon juice. And then, for an herbal note, a scattering of parsley. That’s it. It’s so simple it feels almost like cheating. And yet it’s a classic, likely because how could a splash of butter and lemon be anything but delicious?

Unlike most other sauces, aside perhaps from hollandaise, meunière is pretty dish specific. It doesn’t really stand alone; it’s a sauce but also indicates preparation: sole meunière, or sometimes trout meunière. And though I obeyed and ladled mine over two delicate white filets, I could just as easily see this sauce, essentially a hot vinaigrette, serving as a bright gravy for mashed potatoes or roasted chicken. I would ladle it over a great tray of steamed green beans, or even stir some pasta into it and add shaved parmesan to the top (sidenote: as a kid who didn’t like marinara sauce on pasta, I would have welcomed this alternative with wide-open taste buds).

But as I said, I went traditional here. Not as traditional as sautéing or deboning the fish tableside, as some classic preparations demand, but I resisted my usual urge to add twists or additional ingredients. I wanted to see what this was about.

Okay, so I added some lemon zest to the salt and pepper I used to season the fish before dredging it in flour. But really, such a tiny alteration hardly counts, right? And when you serve the filet tenderly over some rice pilaf and drag your green beans through the last remnants of the sauce, well, words fail (no, seriously. I’ve sat here for fifteen minutes trying to think of how to tell you it was good!). Bring on the butter. She is clearly justified as the diva of the sauce world. 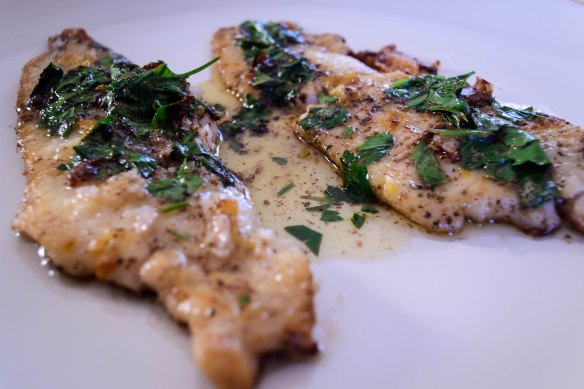 Salt and pepper for sprinkling