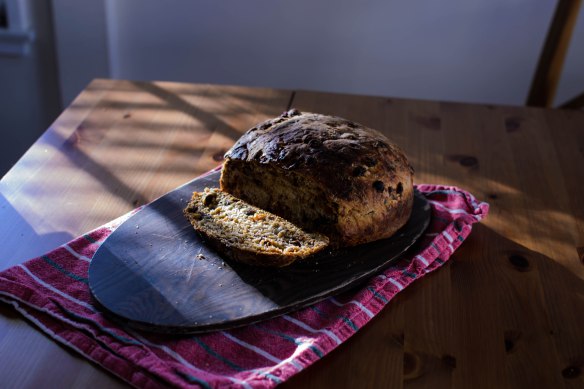 I’m not sure whether it’s a blessing or a curse that, as the semester picks up, this recipe happens to fill both of my current projects for the month of March: the Twelve Loaves assignment, and my own search term theme. It’s a blessing, in that it’s only one loaf that needs to be baked, which is certainly all I can handle in one weekend. It’s a curse, in that it means I have to come up with something else to make this month, since combining these two leaves an extra week out in the open. 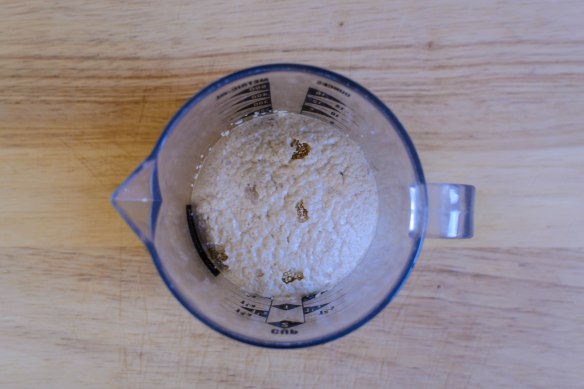 Still, though, it’s fortuitous in an utterly delicious way that these work together. The Twelve Loaves theme for the month is “Irish Breads,” and last year someone found my little site searching for “Irish bread with plums.” Aside from soda bread, the standard go-to Irish loaf, I knew nothing about Irish breads at all. Well, I suppose I knew about scones, but those are really British Isles in general to me, and not as specific to Ireland as I wanted to get.

After a little research, I hit upon barmbrack, or barm braec. In Gaelic, “braec” means speckled, and so this lovely rich bread is threaded through with dried fruit. Usually the speckles are raisins and sultanas (or golden raisins, as we somewhat unimaginatively call them in the U.S.). This seemed, though, like a perfect place to add the requisite plums from the search. They would need to be dried, both because it’s not stone fruit season yet and because the moisture levels of fresh plums would make the bread too wet. Still, though, chopped prunes along with the traditional raisin component seemed promising. I love prunes, with their rich, concentrated flavor and their dense, almost meaty texture, but they don’t often find their way into baked goods, which I think is a shame.*

Barmbrack can be made both as a yeasted loaf and as a simple round raised with baking soda. I decided on yeast, since sometimes I find soda breads a bit too dense for my taste. Since this was already going to be weighed down by the fruit, I wanted to give it a good bit of lift. In either case, it’s usually a holiday bread celebrating the harvest season, and there are sometimes small treasures like rings or coins baked into it as part of a fortune-telling game (I must admit I skipped this part). 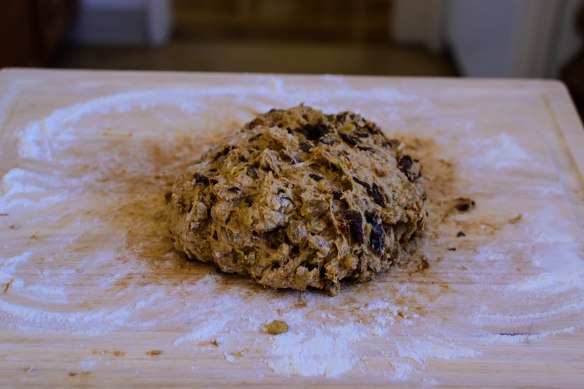 I surveyed a number of recipes, and finally combined two with features I liked. Interestingly, this bread is often made with tea: the dried fruits, and sometimes candied or fresh citrus zest, are soaked in strong black tea for a few hours, or even overnight, before being kneaded into the spiced, slightly enriched dough. I didn’t have any Irish Breakfast Tea, so I gritted my teeth and chose between Earl Grey and English Breakfast. In the end, I went with the Earl Grey. I realize the reference to British politics and aristocracy might ruffle some feathers, but at least it didn’t outright have the word “English” in the name. In any case, do forgive me, and use proper Irish tea for your loaf. 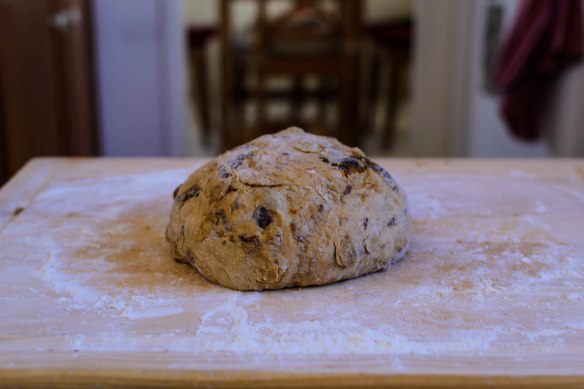 Because there is a lot of moisture from the fruit in this loaf, you can expect a quite sticky dough. Don’t be afraid of it, though; just add some more flour to your board and knead away. You’ll be rewarded, after two rises and the better part of an hour in a hot oven, with a deeply browned loaf studded with a rubble of raisins and prune pieces, moist and richly chewy, but with a firm and almost crackly crust. Because it is baked in a round cake pan, it rises with a glorious even dome, and just around the edge where the loaf leaves the pan, there’s a curiously lovely pale golden stretch mark encircling the bread.

The Saveur recipe I borrowed from suggests, as the end of the baking time nears, brushing the top of the loaf with warm honey and then baking for an additional two minutes. I did not do this, in both an effort avoid too much sweetness and to maintain its lovely crusty exterior. If you should want to, though, they recommend ⅓ cup.

Despite wolfing down a thick slice the day I baked it, N. has since forgotten about this homely little loaf, and I haven’t bothered to remind him, because that means more for me. Even after a few days wrapped in aluminum foil, the interior remains moist and rich but not too dense, and the outside stays perfectly crusty – a rugged, deeply browned layer that I’ve tried all week to think of ways to describe. “Imagine if a brown paper bag were a crust,” I said to N. at one point, but we agreed that didn’t sound particularly delicious. “Perfectly crusty” remains the best thing I can come up with, and you’ll have to believe me that it’s part of what makes the loaf worth hoarding. Perfect still warm from the oven, great at room temperature, and glorious toasted, this is good plain but revelatory with a thick pat of salted butter and, obviously, a cup of tea.

* if you aren’t a prune fan, you can stick with the traditional raisins and sultanas, or test out other dried fruit options: currants would be great here, and dried cranberries or dried cherries might also be good. Dried apricots also sound promising to me along with the sultanas, provided they were quite finely chopped. Perhaps a dollop of clotted cream or even mascarpone cheese over the top of the slice wouldn’t go amiss.

Adapted from Saveur and RTÉ Lifestyle

Makes one 8-inch round loaf

About 5½ hours, including steeping and rising time, or overnight

2 tablespoons each orange and lemon zest, plain or candied

(optional: ⅓ cup honey, warmed, to brush over the loaf)

#TwelveLoaves is a monthly bread baking party created by Lora from Cake Duchess and runs smoothly with the help of Heather of All Roads Lead to the Kitchen, and the rest of our fabulous bakers.

This month we are baking Irish Breads. For more bread recipes, visit the #TwelveLoaves Pinterest board, or check out last month’s inspiring selection of #TwelveLoaves RED Breads!

If you’d like to bake along with us this month, share your Irish Breads using hashtag #TwelveLoaves!

11 thoughts on “Barmbrack with Plums”