I realize, now that summer has fully reared its head and you probably have a fan pointed at you while you read this, that soup is likely not high on your “most wanted” list, particularly not a thick soup – verging into chowder territory – intended to be served hot, possibly with fresh, warm bread on the side. But I owed you a soup for June (yeah, moving. What can I say?), and corn was fresh and sweet and on sale, and this batch of soup was really. really. good. Maybe file it away for a cool weekend on the coast, or a last harvest end-of-summer reminder. Or maybe just sweat.

I think it’s easier for me than for other sorts of writers to answer that perennial “where do you get your ideas?” question, since my answer is “from everything I eat!” and “from most of the television I watch!” This soup has its foundations in two other steaming bowls: the corn chowder in a bread bowl from the French Market at Disneyland, and a now-unfortunately-defunct grocery store treasure: the “Cravin’ Crab and Corn Chowder” from the little soup kiosk at Safeway, a delightfully sinus clearing spicy bowl my mom used to stock in multiples. This one combines an old Dorie Greenspan recipe from Bon Appetit magazine and one of Kenji Lopez-Alt’s from Serious Eats, then hangs around my brain long enough to pick up some ideas gleaned from various food television shows, resulting in a substantial soup rich with corn flavor, studded with sweet, starchy kernels and plenty of crab meat, topped with a fresh salad of more corn – raw this time – more crab, mixed with enough herbs and lime juice to give it kick, that can either sit atop the soup for occasional sampling, or be stirred in last minute. It could easily take wafers of jalapeño or fresno chili, in both the soup and the topping, and it is as completely at home in a hollowed out boule of sourdough as it is in a gleaming white soup bowl.

The attraction of Greenspan’s recipe was the extra step of cooking the corncobs – devoid of their plump, shiny kernels – in the milk that becomes the “broth” of the soup as a method of injecting extra corn flavor. Lopez-Alt does this too, but uses broth instead of milk and steeps rather than boils. When you strip kernels off of a cob, there is usually a good bit left behind – both the bases of the kernels and the corn “milk” that they release when cut into. Extracting that flavor along with some spices in the same way you might, for example, steep shrimp shells or even tea, ensures a more flavorful liquid base.

I wanted mine really packed with corn, and determined that despite earlier considerations about swirls of heavy cream, or miniscule cubes of potato, all this really needed besides the seasoned base was onion, celery, a bit of butter, and some water to thin it without masking the flavor of the corn. This meant that the soup itself might be on the thin side, so I followed my Lopez-Alt’s idea of pureeing a quarter of the finished product to add thickness. This, along with a little bit of flour cooked down with the vegetables, led to a perfect consistency: not so thin that it would seep into our bread bowls, but not so thick that it was more like spoonfuls of sauce than of soup. 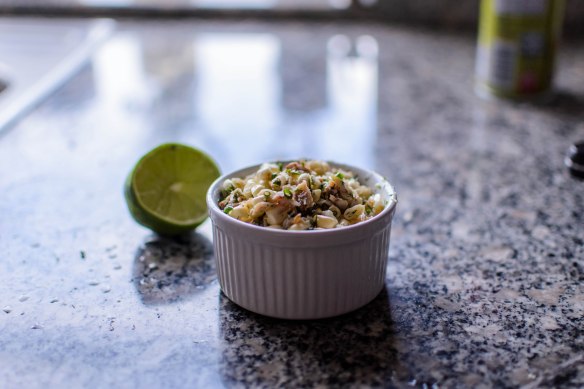 The coup de grace of the cold corn and crab salad on top was a surprise to N., but we both really liked it. You can leave it just atop the bowl, so your spoon can dig out bits of it and control the quantities in each bite, or you can stir it in, so you end up with different textures of corn and a little additional herby kick that remains fresh, since it is only warmed by the residual heat of your bowlful, rather than being actually cooked for any length of time. You could use jumbo lump crab if you’re fancy, but I went with claw meat because I was being cheap economical, and we were both satisfied with the flavor.*

If you are doing bread bowls as serving vessels, may I make the following suggestion? Before serving, spray the hollowed insides of the bowls with a little olive oil spray and brown them under the broiler for a few minutes. I know, more heat in your already-too-hot-summer-kitchen, but it helps them hold up against the onslaught of liquid and contributes a lovely toasty flavor. If you really want to treat yourself, once you’ve sliced off the “lids” of each bowl (reserving the interiors for bread crumbs! Maybe for this!), slather them with soft butter and sprinkle on a little salt and some finely chopped mixed herbs, and settle them under the broiler for a minute or two as well. The butter sizzles and browns and the herbs char just a little bit, and you have a kind of giant soup crouton, far more interesting and certainly more indulgent than oyster crackers, with only a little bit of extra effort.

I know this puts me behind in our soup calendar, but next month I am going to try to catch up, and finally give you what the season requires: cold summer soups. Like last week’s salmon, these will cook early in the day, if at all, then slowly deepen and meld in flavor as they hang out in the fridge, waiting to cool you down at dinnertime. But next week, as we careen frantically into August, I vote we pause just a moment for dessert.

*another idea that would, perhaps, give you the most bang for your buck in terms of price and impression, would be to use 4 ounces of claw meat to stir into the soup, and 4 ounces of jumbo lump for the salad on top.

8 ounces crab pieces, picked through for shell or cartilage fragments. I used claw meat, but you could use jumbo lump instead, or even a combination of the two as noted above: claw meat to stir into the soup, jumbo lump to serve on top

Bread bowls to serve, if desired

3 thoughts on “Corn and crab chowder”