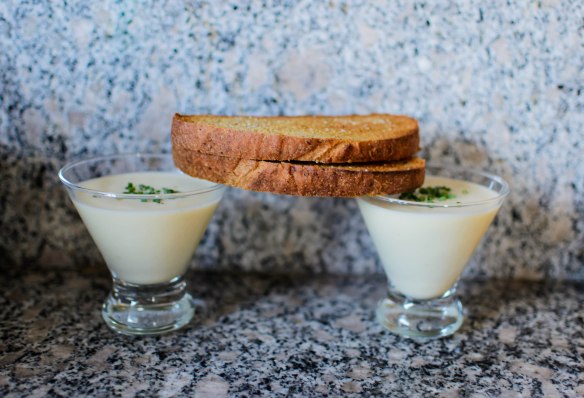 Summer is a strange time for soup. Yes, the need for a vegetal base in most means the potentials for flavors are as wide ranging as your harvest (or, let’s be honest, your farmers’ market or produce section), but there’s that whole hot food in hot weather issue that sometimes turns us off. I know that I, at my most overheated, want only cold salads, grilled meat, and an adult beverage.

Fortunately for us, and for this project, there are some soups designed to combat the heat problem, in that they are traditionally served cold. It’s a strange sensation if you’ve never tried one – the first time I had a cold soup, I found myself blowing on the spoon a few times before tasting, because even though I knew it wasn’t a hot liquid, my body was so programmed to treat it as such that I couldn’t overcome the instinct. 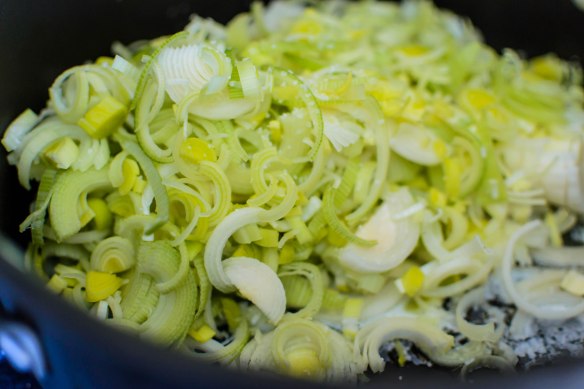 It’s possible that the best known, or perhaps most popular, cold soup is gazpacho, but since we just talked about tomatoes, and since the tomatoes I’ve seen at the market in the last few weeks haven’t quite been at their peak, I’m waiting till September, our hottest month in Southern California and therefore the best time to have this cold, raw, bright blend waiting for me in the fridge. Instead, I’m taking us in an unlikely and humble direction: let’s talk leeks and potatoes. It’s a little strange that these two wintry vegetables are the star players in one of the best known cold soups, but maybe it’s a subtle nod to wish fulfillment: if you find you want things to be cooler, then you are lusting after a season half a year away. Vichyssoise, this chilled reminder of cooler times, is the creation of chef Louis Diat. While working at The Ritz in New York in the early 1900s, Diat made a soup that reminded him of a simple bowl his mother used to put together when he was a child in France, but decided to serve it cold with a sprinkling of chives on top. The resulting concoction can be served chunky or pureed, hot or chilled, but as Diat popularized, ice cold and velvet smooth is the most common. 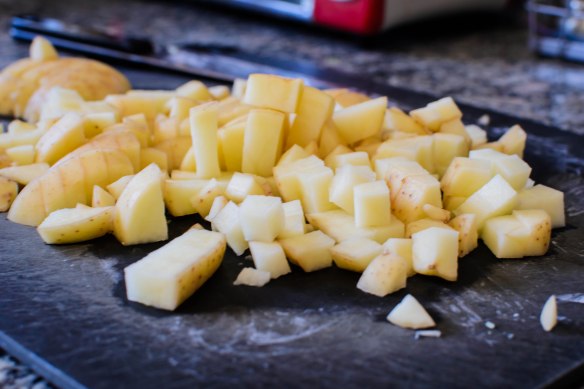 Most recipes are very simple. So simple, in fact, that cooks tend to add and tweak and substitute to make the finished product… what? More interesting? More original? More publishable, I suspect, without leaving the same old classic, unadorned team assembled. Butter. Potatoes. Leeks. Broth or water. Cream. Chives. Sometimes onion bolsters the leeks, various combinations of seasoning are added, and one intriguing option I saw used buttermilk at the end for tang. Differentiations lie in the quantities of the two star players – is it leek-led, or potato heavy? – the amount of broth and of cream, and the thickness of the finished product. To make mine, I turned to the internet and found, among a wealth of potentials, three that looked straightforward, fairly traditional, and from recognizable names. Then I realized all three authors’ names started with B, and I was stuck – the wordsmith in me loves the “rule of three,” and when your sources are Brown, Bittman, and Bourdain, how can you alter course? 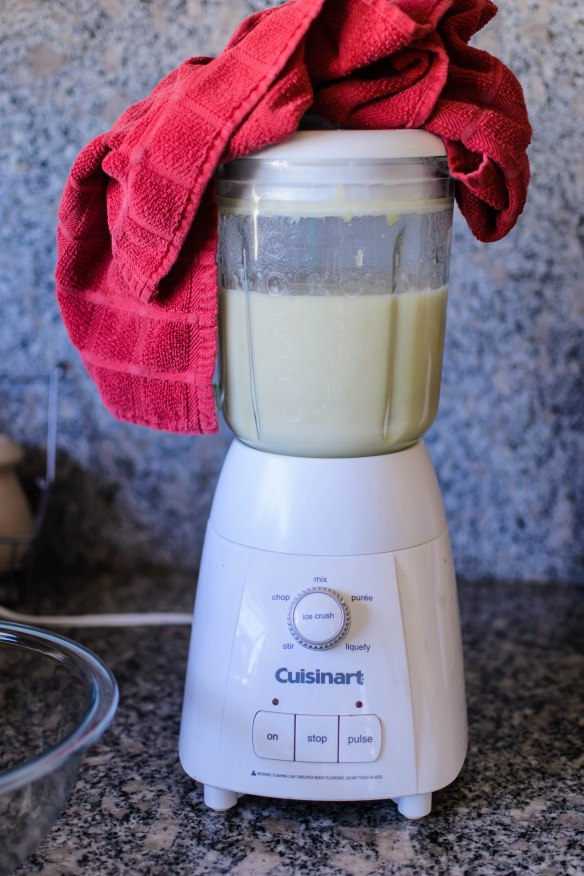 There are a few differences in quantities and in seasoning options between these “big three,” but the basics are there. Alton Brown suggests Yukon gold potatoes, which I was pleased to see, since so many other recipes don’t specify. The biggest difference, interestingly, was in cooking time and dairy additions. Bourdain and Bittman sweat their leeks for only a few minutes; Alton (I just can’t call him “Brown”) goes for almost a full half hour. I erred on his side, since really, it’s a lot of leeks, and there are so few ingredients that we need to develop flavor somewhere. 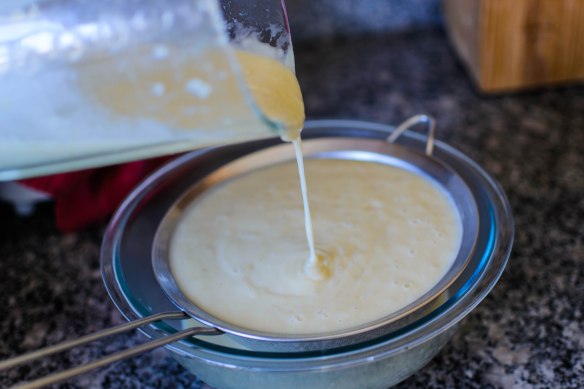 I debated for a few minutes deglazing the limp, pale pile of cooked leeks with a few glugs of vodka to play with the potato idea, but ultimately decided against it, and wound up with a pot of sippable silk that needed only the traditional sprinkling of chives to make it interesting (well, N. thought it also needed a few additional grinds of pepper, but that’s him).

Two possibilities if you wanted to fancy this up. As we ate, unsurprisingly, we noted how this soup is on some level just really, really loose mashed potatoes spiked with onion flavor. To that end, we thought about the possibilities of baked potato toppings: imagine a bowl of creamed potato velvet topped not only with chives, but crumbles of crisp bacon, shreds of sharp cheddar, maybe even a dollop of sour cream. This would add some textual interest as well as other flavors, since I’ll admit a small bowlful of this is all you need – more than that and it runs the risk of monotony. 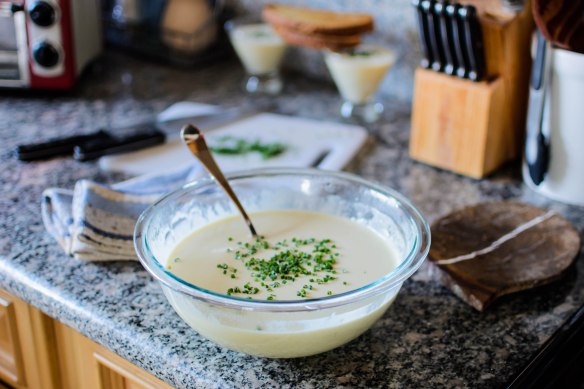 The other option plays into my bibliophilic considerations above. Small bowls are one thing, but what if you wanted to serve this as, say, an hors d’oeuvre option at a summer soiree? Imagine a cold, very lightly spiked soup in tall shot glasses, served on a shallow, ice-packed tray. You would need only to add a half cup or so of vodka to the concoction, before the long simmer if you want to eliminate the bulk of the alcohol, after if you want this to be a boozy option.

Like many thick soups, vichyssoise is even better on day two than day one, and conveniently, it takes no additional preparation since you don’t even have to reheat it. That said, the onion flavor from the leeks gets progressively stronger as the soup sits, so by day four it is pretty allium-heavy. Also convenient, though this is traditionally a cold soup, it is also delicious served warm, so if you can’t handle the cognitive dissonance, or your last weeks of August are looking chilly, this remains a viable option.

About 60 minutes, plus at least 2 hours to chill

additional salt and pepper to taste