For my first foray into dessert, N. gave me a list of ingredients that, at least in two cases, were deviously chosen with ulterior motives. As he’s currently training for a marathon (twenty-six miles and change! My brain can’t even fathom how long that is!), he is consistently hungry, and always looking for protein-laden snacks. He goes through chicken thighs, hard-boiled eggs, and toasted tempeh at alarming rates. Recently, he decided chocolate milk would be a fantastic mid-afternoon pick-me-up indulgence, and thus the chocolate syrup was assigned. As for the Hawaiian sweet rolls, he let me know in no uncertain terms that the leftovers would be “great for pulled pork!” so, of course, that was also added to our menu for the week…

I have to admit that this quartet stumped me for a while, though perhaps not in the way you might expect. In fact, as soon as N. handed me the post-it note on which he’d written his choices, I had an answer in mind: this screamed bread pudding. The rolls could be toasted, and would be perfect for absorbing a bourbon-spiked custard mixture. The chocolate would make it extra indulgent, and the sea salt could get sprinkled on top, as with my favorite cookies, for a briny unexpected crunch. 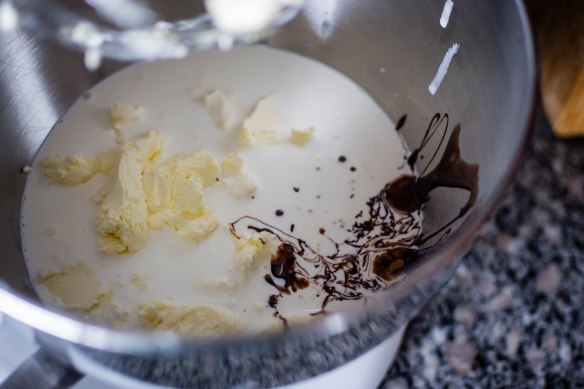 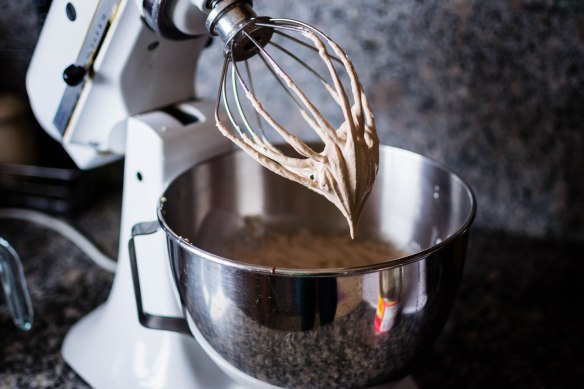 But I couldn’t make bread pudding. I couldn’t. As easy as it would be, and as well as the ingredients lent themselves to it, doing so would make me a hypocrite. As N. (or anyone who has had the misfortune to watch the show with me) can attest, bread pudding is one of the dessert choices contestants make that instantly evokes bellows of protest from me. “DON’T MAKE BREAD PUDDING!” I yell. “YOU DON’T HAVE ENOUGH TIME!” And they usually don’t! Their custards don’t set, their bread isn’t properly soaked, and they usually wind up with runny undercooked messes. I say other things about their choices too, which are even less nice. But we don’t have to talk about that here.

So even though I am not restricting myself to a time frame, I just don’t think I can get away with making bread pudding – not with as rude as I’ve been to the television about it. Neither can I make French toast, nor panna cotta, nor crepes (though this last one is less about not having enough time, and more about me explaining, tiredly, over and over, as if they can hear me, that “of COURSE your first couple are going to be disasters; that’s what crepes DO! Try again!). I had to go with something I don’t, from the safety and anonymity of my living room, routinely take contestants to task for, as natural as the choice might be.

I’m not sure what made me come around to ice cream, but from that point I realized the small size of the Hawaiian rolls might make the dessert a play on sliders. The scoop of ice cream, spiked with bourbon and browned with chocolate, would stand in for the burger patty. There would need to be something bright and acidic to break up the richness, so smashed raspberries might make a fun alternative for a slice or tomato or a slick of ketchup.

As for the sea salt, the only thing I could think of was salted caramel, and this dessert didn’t really need another creamy, drippy, sweet component. I was stumped until I remembered an episode of The Great British Baking Show in which the contestants made hazelnut dacquoise, an elevated meringue cake sweetened by praline, essentially toasted hazelnuts encased in hard caramel that had been reduced to a powder. That would be the perfect place to put the salt and another glug or two of the bourbon, and the powder could be rolled around the edges of the ice cream, like a more sophisticated sprinkle lining to an ice cream sandwich. 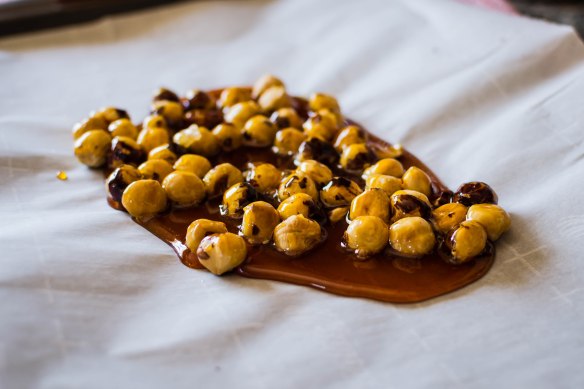 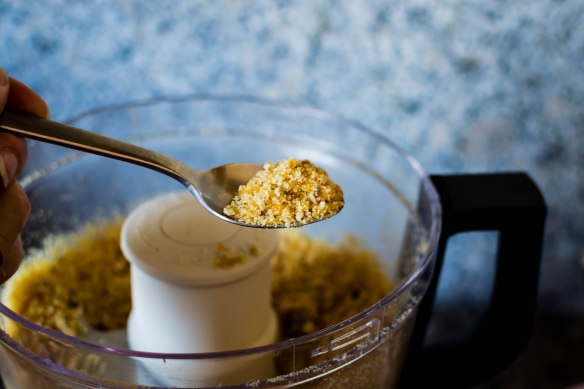 So here’s how it went: the ice cream was without question the best component. I’m using here a version of a recipe I’ve played with before – a no-churn, egg-free miracle from Nigella Lawson that, sure, takes about six hours to freeze up and requires one specialty ingredient, but hey, with chocolate and bourbon in there, and since I’ve always been able to find that specialty item at Whole Foods, was no big deal, really. I’d just make the ice cream the day before.

The praline was delicious and surprisingly successful. As I was making the caramel, using bourbon rater than water to help the sugar dissolve, things start to crystallize a bit, but rather than dumping the mess out and starting again, I added about a tablespoon of water, stirred it up, and magically the crystals dissolved and a gorgeous caramel the color of maple syrup bubbled its way into being. With no added dairy, it solidified into a sheet of colored glass around the hazelnuts, and the powder turned out to be equally delightful paired with the ice cream as it was an indulgent sweetener for oatmeal a morning or two later.

As for the Hawaiian rolls, while they made a reasonable vehicle for getting the other ingredients to our anxious mouths, I couldn’t help but feel as though they weren’t really needed. This could just as easily have been an ice cream sundae: smooth, luscious scoops dollops with smashed raspberries, generously sprinkled with praline, then topped with freshly whipped cream. And the rolls… well, since they had to be included, perhaps I could have toasted them, ground them up, and mixed them into the praline.

A project for another month, perhaps. Regardless, my judge says I am “on to the next round,” and now that I’ve done one of each course, April’s challenge is unknown. N. might give me an entrée, or an appetizer, or he might drop another dessert in my lap, considering he’s got twenty-six miles to run and a continually growling void in place of a stomach. We’ll just have to wait and see…

At least 6½ hours, counting time for ice cream to chill and harden

6 ounces double cream (I found mine at Whole Foods)

1 pint raspberries (or fewer, depending on how many are enjoying), smashed with a fork (add a sprinkle of sugar if you want, but the rest of the dessert is pretty sweet)

Additional chocolate syrup, if desired, to decorate the plate