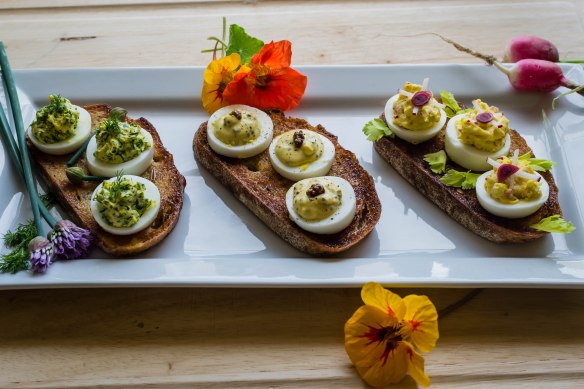 When I planned out this post, I had big dreams: I was on spring break, and I was going to do research and offer you a big history lesson into the tradition of “deviled” foods (short version: in savory items this indicates something heavily spiced, i.e. the mustard or paprika of a deviled egg or the hot sauce of deviled ham). I did a thoroughly scientific examination of which kind of fat – unsalted butter [below, left], mayonnaise {below, right], or olive oil [below, center] – would be best for the crostini (short version: I liked mayonnaise the best. It toasted evenly, it had a mild flavor, and it was easiest since I was going to use it anyway for the egg filling. The butter had a pleasant toasty flavor from the browned solids, and the olive oil not only had the most assertive flavor, which I deemed potentially distracting from the egg, but took the longest to toast). I came up with three filling options to tickle your fancy and your taste buds, and decided I didn’t have to choose – we would talk about them all: how the classic is simple and perfect, but then I thought about tuna salad as inspiration for the vegetable-forward version, and an herby, punchy latke spread for the one with horseradish… 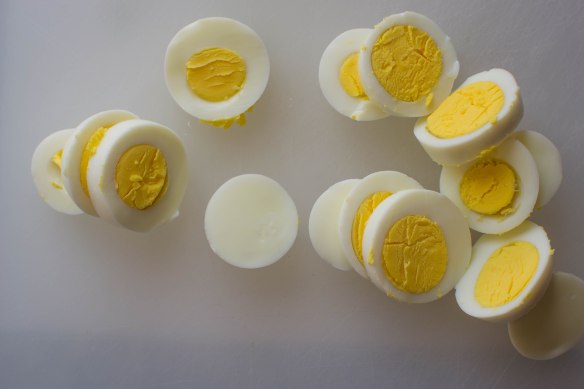 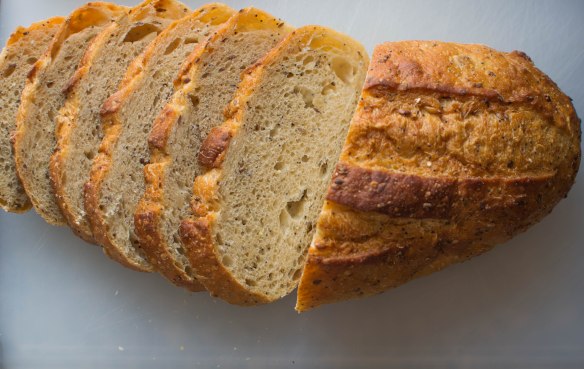 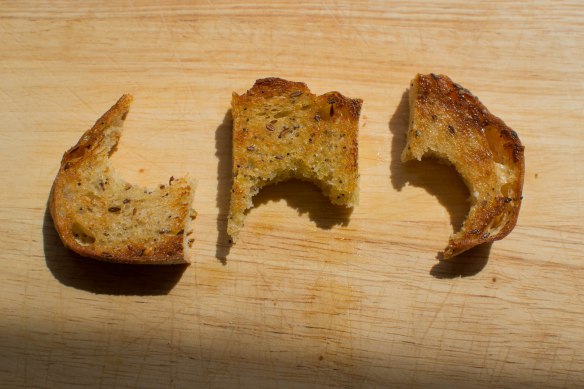 But then I stepped into my “outdoor photo studio” the day of and got so excited about the photography part of this self-imposed assignment that I must confess I ran out of steam a bit. Instead of overloading you with information, I’ll invite you to sink deeply into the Alice in Wonderland garden setting and indulge me my fussy fanciness (though you must admit: these would be lovely as an Easter brunch item, or a bridal or baby shower, or some other spring… thing…).

These made a delicious, extravagant lunch. In addition to being “highly spiced,” I think a good deviled egg needs some acidic component, and these did not disappoint. Despite my love for my “classic” recipe, I found I liked the “Herbaceous” version the best, with its subtle but peppery horseradish tang.

Just a few things before I let you get on to the rest of the exhibit and the recipe itself: one key to making lovely, heaping deviled eggs is to boil one egg more than you want to serve. One of the whites gets discarded, so you wind up with the equivalent of one extra yolk to pile high. Here, I have offered quantities for one crostini of each type, which means you need 4 eggs, but you could easily double or triple the amounts in each individual variety, and you could certainly serve them as traditional deviled eggs, which would entail just halving the whites instead of slicing them. You also certainly don’t have to provide all the intricate little garnishes; I went a touch overboard because I had time and wanted to play. Any of these would be fine without the little toppers. Now on with the show… 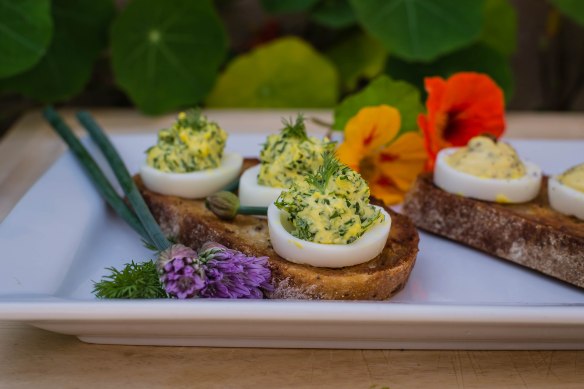 Makes 4 eggs; enough for 3 crostini (one of each type)

Seeded bread, thinly spread with fat of your choice, broiled until golden

6-8 thinly cut radish spears, to garnish (cut a thin slice into thin sticks, as in the photos)

¼ teaspoon lemon juice, or to taste