Though the food in this post, and the topic at large are from Christmas, the need for posting is largely a result of a newly established Ladies’ Spaghetti Night that I recently attended.In true occupatio style, I will say nothing of A.’s marvelous sauce, chunky with sweet, acidic tomatoes and impossibly large slices of button mushrooms.I will not mention how good the bread, delicately seeded and torn in large chunks from the loaf, was when we smashed cloves of roasted garlic over it.No, the reason for this post is one of the people involved in the genesis of this weekly pastafest.Though she was not present at the particular gathering of which I speak, she was in my thoughts because she cannot eat gluten.She also can’t do dairy.This means that when Ph. is in attendance, we have to have gluten-free pasta.It also means that since almost everything I cook involves bread, butter, or cheese in some form, rarely do I make anything that Ph. can eat.

All that changed on Christmas Day (I think, since I haven’t cleared the recipe with her yet).Let me explain.For probably a decade, my family has done Thanksgiving and Christmas with another family who my parents have known since at least the time that I was born.I’m the oldest of the four kids between the two families, so that’s a long time.Three or four years ago at about 5:30pm on December 25th, over a steaming baked brie and a ¾ eaten bread bowl of spinach dip, five of the eight of us decided that we weren’t hungry.We had eaten appetizers with such enjoyment and such gusto that the standing rib roast my dad was asking whether he should carve seemed utterly extraneous.We decided a new plan was in order.Appetizer Christmas. 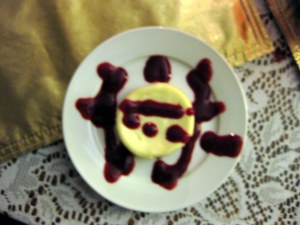 This year, I made spring rolls.Here’s where Ph. comes in, because they were made with rice noodles and rice wraps.No flour.No wheat.No cheese.I found the recipe here: http://www.ivu.org/recipes/chinese/spring-rolls.html and highly recommend it with minimal alterations.

I found that making these in a two person assembly line was really effective.While I jammed small piles of carrot, lettuce, mint, and noodles into each wrapper, my mom dipped and flipped the next wrapper to bat in a wide, shallow Tupperware of warm water until it lost its rigid structure and became elastic.Warm water works the best for this, and we discovered that each rice paper round needs between 30-50 seconds in the water.After a few botched first tries (I’ve never rolled a spring roll before), we settled into the perfect harmony of dipping, rolling, and transferring.It took me exactly the amount of time to stuff and wrap a spring roll as it took for the next wrapper to melt into perfect texture.When we made the sauce, which my sister took charge of, we substituted lime juice for some of the broth and water for the rest, since one of our fellow consumers is vegetarian.It turned out thick and sweet and a perfect accompaniment.

I definitely side with the recipe’s author in calling for mint with no substitutions in this recipe.Since I have an ample crop just poking their little heads up in the backyard amidst the decimation of stalks left over from last fall, this herbal portion is easily reproducible.Pressing and baking the tofu, which I had never done before, gave it a whole new texture that my dad (who is marginally obsessed with the power of soy) and I both really enjoyed.I think others did too, but he and I professed it the most loudly.The compressed slices sucked in the tamari I glugged over them, and smelled so good that I didn’t even mind the burn I got when, too excited to be remotely intelligent, I reached in and grabbed the cookie sheet I was baking the slices on out of the oven without a potholder.The tofu and the skin on my hand both survived.Ah, the magic of Christmas.