I am sitting on my front porch with my feet – in striped socks – crossed atop the white railing. It is 4pm and the outside temperature exceeds 70F. Earlier this afternoon, I pulled weeds and thinned our rows of broccoli and lettuce in the back garden with my sleeves rolled up. And I’m looking back to Friday. This past Friday ago, while rain and hail alternately pelted, flooded, and overflowed the lip of our driveway, I put my stove and oven into an overtime they haven’t seen since Thanksgiving. Everything was good, but what I want to discuss today is item 3 from that menu:  Cranberry Donuts.

They were more fritters than donuts, really, but that’s close enough. Simple batter: egg, milk, sugar, flour, baking powder, cinnamon. And to add something special, a spare ½ cup of defrosted cranberries, barely pulsed in the food processor. No rolling, no cutting, no kneading, just tablespoon-fuls of this chewy, sticky batter into a pot of hot vegetable oil. I came close to disaster several times, because the batter was so sticky that it didn’t want to come off the spoon. The problem here, of course, is that resistance leads to increasingly vigorous shaking, which means when the fritter finally disengages, it hits the oil with a resounding, gut-wrenching plunk that means you will end up with finger confit if you don’t step back very, very quickly.

I escaped burns, and was able instead to watch the quick and wondrous transformation of a batter so raw and sticky it cannot even be called “dough” into these little two-bite-mouthfuls of extravagance.

When the batter drops into the pot, with a heavy plunk or even a less fear-inducing hiss, it sinks for half a moment before buoying back to the surface. It sizzles like onions in a hot pan, and somehow magically holds itself together to float in a lazy circle around the pot, trying to bump and mesh with any fellows you add. I played chaperone with a slotted spoon. It only takes about two minutes before the lower half of the fritter, concealed like an iceberg below the surface of the oil, is mouthwateringly golden and crispy and needs to be flipped over before it verges toward mahogany. The second side takes even less time, since it has already been submerged in its initial dip into the oil, and when it too is crisp and the color of perfect toast, or a dark caramel, it should come out and bathe on a layer of paper-towels, spreading its extra grease almost obscenely until the paper-towel is suddenly transparent.

While still warm, I rolled these dense nuggets around in a cake-pan containing around ½ cup of mixed cinnamon and sugar. Though much of the oil threatening to seep in past the crisp crust was thwarted by its paper-towel session, enough moisture is retained on the outside of each fritter to hold onto a sparkling coat of sweetness. That the batter drops into the oil in irregular shapes ensures that crunchy nooks and crannies are created, almost as if their sole purpose was to hold extra sprinklings of spicy sugar.

Before I was done frying (my pot could only hold 4 or 5 at a time without crowding or cooling down the oil too much, so I did several batches), I couldn’t keep myself from sampling one of the freshly sugared spheres. Oh heaven. It doesn’t seem like the batter could possibly be in the oil long enough to cook through, but it does. The outside is crispy and has a nicely textured crunch not only from the irregular shape and the fry, but also from the sugar, which provides its own gritty pleasantness. The inside is densely fluffy, and the cranberries pack the perfect amount of tart sourness to combat the sweetness of the dough itself as well as the sugary topping. I don’t tend to like cake donuts, but it was hard to stop myself from eating more than one. 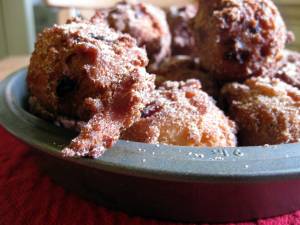 After the party started and plates were loaded almost beyond bearing capacity, I didn’t notice anyone eating them. Yet, when I went back to the table for my second helping (or third, but who’s counting, really?), the cake pan I’d loaded them into was empty but for a remaining few spoonfuls of cinnamon-dusted sugar.

Even without the sun streaming across the faded red patio stones of my porch, that makes me feel a little warm inside.