It’s getting a little busy around here.  Being a PhD student is a strange “profession,” if you can call it that, because the workload hefts itself around in such varied ways.  In the past week I have been a researcher, a teacher, a session organizer (for a conference that doesn’t take place until July 2012!), a not-nearly-ready-even-though-my-flight-leaves-Thursday conference attendee, as well as a housewife, a hostess, an unprofessional baker, a very unprofessional blogger, and a dogmom.  And the craziest thing is, with only two or three exceptions that’s what I am every week.  It tends to produce feelings of insufficiency.

So this past week we picked a stuffing.  It seemed only appropriate, since I have such a full plate in the figurative sense, to match this in the literal world.

“24. Combine a little cooked wild rice with much more cooked quinoa; sauté crumbled sweet Italian sausage with onion and fresh rosemary.  Toss together.  Bake in an oiled dish or use as stuffing.”

Since I never stuff poultry, and the pork chops I would consider stuffing are on N.’s “I don’t eat that” list, I guess what we ate this week was a “dressing,” which is a term I’ve never understood.  Nevertheless, I collected ingredients, once again feeling delight at Trader Joe’s as I found a bag of pure, pre-cooked wild rice, and assembled the following: 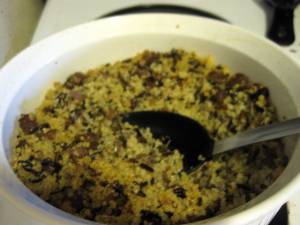 While the quinoa cooked, I added the sausage to a skillet with a tiny slick of oil and broke it up with a spatula so it would brown into crumbles.  When the sausage was more than halfway done, I added the onions and then the rosemary so their flavors would mingle and they would benefit from the sausage fat as a caramelizing agent.

When quinoa and sausage (and friends) were done, I stirred the meat mixture and the wild rice into the quinoa, then put it in an ovenproof casserole dish and stowed it in a 350F oven for half an hour.

In the last few minutes of baking time, I prepared our side dish: in the same pan as I had cooked the sausage, I tossed about half a bag of mixed southern greens and a few minced cloves of garlic.  As they began to cook down, I added a generous splash of red wine and a tablespoon or so of soy sauce.  This tenderized the tougher stems and flavored the leaves with tangy, salty assertiveness.

The greens were, as I already knew they would be, delicious.  We are entering the time of year when I start to crave excessive quantities of vegetables (last night I kept returning to the kitchen to snag lukewarm pieces of kale from a saucepan, and tonight’s leftover roasted broccoli didn’t even make it to the refrigerator), so the pile of slightly bitter, slightly saline roughage on my plate was the highlight for me.  The quinoa “stuffing” was also very tasty.  I don’t usually add meat to my stuffings, but here the fattiness of the sausage was a welcome foil to the nutty, healthy-feeling quinoa.  The wild rice and rosemary lent woodsy, piney flavors, making this an ideal stuffing for a wintry dinner.  I do think pork chops would receive this filling well, as would portabella mushrooms.  For us, as the wine sauce from the greens slowly bled its way across the plate into the quinoa, it was a lovely, protein packed dinner. 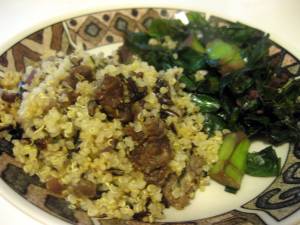 But as so frequently seems to happen with these Bittman experiments, the leftovers took me by pleasant surprise.  The next day, I dressed a plate of arugula with lemon juice, olive oil, salt and pepper, then topped it with a few scoops of the quinoa mixture and popped it in the microwave for a minute.  The resulting warm salad was stupendous.  The lemon juice added just the right kick of acid, which I hadn’t realized the dish had been lacking.  Salty, crunchy, comforting and peppery all at once, it was a lunch that needed no accompaniment.  And when you are nearing your capacity from trying to be everything at once, realizing you are going to make it and you need no accompaniment is an empowering thing.