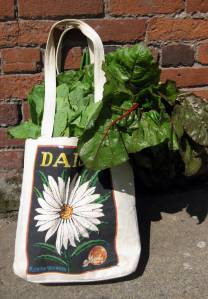 Oregon’s springs are interesting and sometimes frustrating seasons that really make you think about all the definitions of the word “spring.”  Sure, this evokes images of shy but increasingly sure sunshine, flowers, warmth, but that’s not what a spring is.  When springs stretch out, inevitably they snap back.  With a frost advisory a few nights ago and the weather still stubbornly refusing to push up out of the 60s, we have experienced more of a springing back than a springing forward.

And yet my taste buds are ready, even if the weather is not.  I am finding I crave greenness, tartness, fresh peppery crunch, to combat the rich softness of winter comforters.  Bittman obliged:

“28. Toss cooked Israeli couscous with toasted pecans, orange zest and juice, chopped mint, cider vinegar and honey.  Bake in an oiled dish or use as stuffing.”

Remembering the pleasing tapioca-like chew of Israeli couscous from my last experiment with this pasta, I was enthusiastic about this combination.  I assembled:

a drizzle of olive oil

zest and juice of ½ a large orange

I cooked the couscous according to package directions, letting the tiny pearls sizzle in olive oil for a few minutes before adding water.  This quick toasting adds a deeper flavor, which I am in deep support of.  This dish could easily be made gluten-free, with the simple replacement of quinoa or brown rice for the couscous.  Either way, I’d still advocate toasting the grain before boiling it.

While the couscous cooked, I chopped, zested, and juiced, then put my pecans into a cold oven, which I promptly set for 400F.  I’ve discovered that generally in the time it takes the oven to preheat, the nuts have toasted, and you can take them out and add them to the dish in question, feeling pride that you’ve been able to use that oven energy for part of the meal.  The only problem with doing this is, you still have to check on the nuts occasionally, because depending on the temperature you are setting the oven to, it may take longer than you expect to preheat… and this equates to burnt nuts.

As I picked through the all-but-charred remnants and discarded the truly blackened pieces of what had been ½ cup of pecans, I found myself reflecting on the choice of citrus in this dish.  I love citrus.  I like the brightness, the tartness, and its ability to transcend the sweet/savory divide.  And yet, when I think citrus, I almost inevitably turn to lemon.  Salad dressings, fish, pasta, cheesecakes, all benefit from a grating of lemon zest or a hangnail-piercing squeeze of juice.  Why, I wondered, do I never think of oranges in the same way?  Lemons are like a deafening gasp of freshness.  Orange peel is somehow more synaesthetic: bright, yes, but punctuated by a perfumed headiness, like walking through a cloud of incense.  Yet here, when I blended the orange juice, vinegar, and honey together with the zest, it was the most perfect zingy-sweet-tart dressing imaginable.  Ideal for this dish, I imagined so many other applications: drizzled over prosciutto wrapped bundles of arugula, tossed with chunks of fruit for a summer fruit salad, maybe even spooned atop grilled fish or chicken.  I resisted the urge to sip spoonfuls of it. 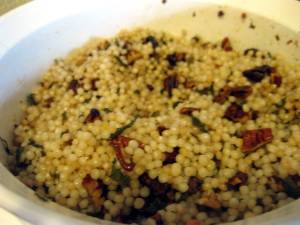 After fluffing the couscous with a fork and distributing some olive oil through it to prevent clumping, I mixed everything together in a baking dish and tossed it with the delectable sauce.  This was brightness at its apogee.  I stowed it in the oven for half an hour.

While the couscous baked, I prepped our vegetable side.  With the Farmers’ Market back up and running, the profusion of leafy vegetables is almost overwhelming.  Without intended anything of the kind, I had brought home an enormous bundle of rainbow chard – red, pink, orange, salmon colored stems – and decided to impart some vinegar-based freshness into it as well.  I sliced the leaves away from the thick stems and then chopped the stems like celery into half-inch-or-so thick pieces.  Then I dropped stems and wafer thin slices of ½ a red onion into a pan with a few tablespoons of butter.  While those cooked down, I chopped the chard leaves roughly and considered flavorings.  Though I often pair chard with nutmeg, craisins, or balsamic vinegar, this didn’t seem like the right companions for tonight.  Sometimes I add garlic, sesame oil, and soy sauce but this, too, seemed like it wouldn’t mesh well with our zesty-fresh couscous.  At last, genius!  I dribbled in not only a few teaspoons of cider vinegar to match the flavor in the couscous, but at least a tablespoon of whole grain mustard, which I scrambled quickly amidst the softening stems.  Then all that remained was to toss in the leaves, turn them over in the pan a few times until they wilted, and add some salt and pepper.  Bingo.  Amazing.

The pairing was lovely.  The perfumed orange peel and the pecans in the couscous were a beautiful marriage, as the heady zip of the orange benefited from the caramel smokiness toasted pecans always seem to have.  The vinegar kept it from being too sweet, and the mint gave the suggestion of flavor, though I think it could be replaced by parsley with no ill effects.

The chard dish was spectacular.  The same bite of vinegar stood out in both, but the chard was definitively savory, and the mustard gave it some backbone.  The onions and chard stems had become meltingly tender, but the just wilted leaves left a freshness to the dish.

Crisp, very cold apple cider, or a Ruby ale from McMenamin’s, would have been splendid with this.  Light but substantial, rich without being heavy, with those wintery flavors of orange peel and pecan applied to the freshness of spring.

The sun is out.  Does that mean, Oregon skies, we can put our hopes in Springtime at last?