Though many of Bittman’s 101 Make Ahead Sides seem clearly autumnal, and some downright Thanksgiving-y, some are a bit further afield.  This week we went with one of the latter.

“40. Peel and trim pearl onions and toss them with a mixture of minced ginger, garlic, chilis and peanut oil. (A little sesame oil is good, too.) Roast until nicely caramelized, then drizzle with soy sauce.”

This clearly called for an Asian theme, so I bought tofu and bok choy for an accompanying stir-fry.  As for the sideshow-in-the-spotlight, I went the easy route and assembled: 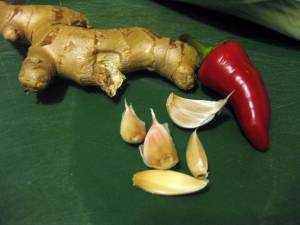 I did as Bittman instructed, with the exception that, skimming the recipe too quickly, I mixed the soy sauce in with the onions and everything rather than waiting until they were done.  This, like hastily dumping the onions into a pie plate while they were still slightly frozen, was a mistake.  This dish needs dryness to work.  Or, rather, it needs its primary moisture to come from fat, like anything you roast, and not from a water-based liquid.  It also, I suspect, needed a cookie sheet rather than a glass pie dish to roast in.  Something about the conductivity of metal plus the extra space a cookie sheet would have afforded would, I suspect, have produced better results.

Not that my results were bad!  I preheated the oven to 400F and slid the onions in for 20 minutes while I made the stirfry of tofu and greens.  I used my favorite tofu recipe, adding the bok choy in when the tofu was about halfway done.  Then I added a few tablespoons each of white wine and soy sauce to give the bok choy something to soften into, and to add a little flavorful sauciness to the dish. 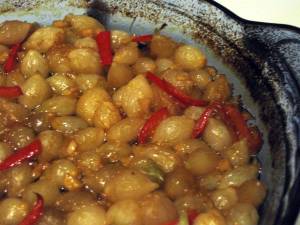 When the 20 minutes I’d allotted the onions were up, I slid them out to find basically zero caramelization.  All the color you can see in this photo is from the soy sauce.  I attribute this to three things: the onions were too wet from a combination of the soy sauce and the not-quite-completed defrosting process, the pan was too crowded, and I wasn’t patient enough to leave them in longer (N. had gone on an epic 12-mile run earlier in the day and could not wait much longer for dinner).  So there was no beautiful toasty browning, but we ate them anyway.

They were mild and sweet with sharp kicks from the aromatics: a faint burn from the garlic, a forward warmth from the ginger, and the barest suggestion of spiciness from the pepper (leave the seeds in for more heat).  They were tasty, but I suspect they needed that caramelization to be really special.  I ended up tossing them in with my tofu and bok choy and eating the whole thing as a single stir-fry, as if they were supposed to be commingled.  They forgave my mistakes, coexisted, and rather than a side-act-acting as a main and a main with side features, they just became dinner. 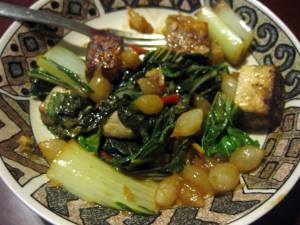 3 thoughts on “Mistakes can still be delicious”