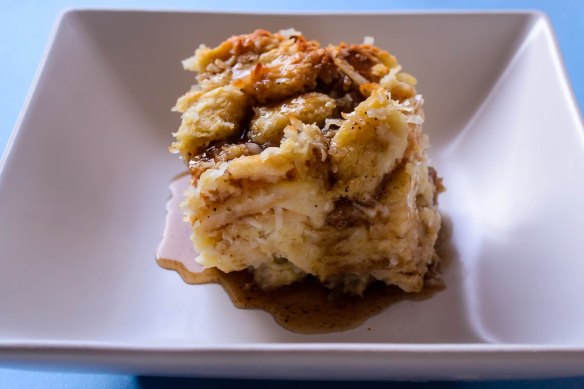 When I’m not frying in the summer time, it seems like I’m baking.  But in the on-and-off foggy uncertainty of June gloom, sometimes you need a little baking.  Of course, now it’s July and the whole West Coast is panting and dreaming of snow drifts so, as usual, I’m behind.  This dessert, though, plush with custard and drenched in rum caramel, is worth it. 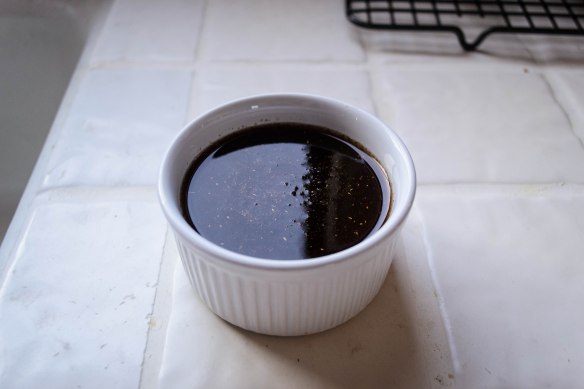 Bread pudding is an old dish and, like so many of the “comfort foods” we’ve embraced and raised to new levels of sophistication (I’m looking at you, French onion soup…), it began as a way to use up aging products in a way that made them still taste good.  In this case, it’s combining cubes of stale bread with milk, eggs, sugar, and whatever else you think is particularly delicious, whether that be fruits, nuts, or chocolate.  Savory as well as sweet iterations exist, and though the dish possibly has European origins, versions now exist in Cuba, the Philippines, Argentina, and in probably every gastropub in the U.S. playing the amped-up-comfort-food angle. 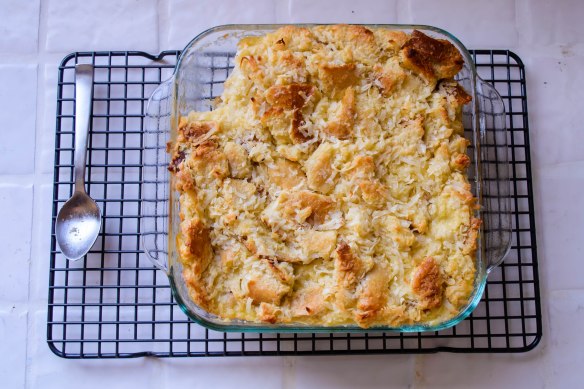 For me, bread pudding is a godsend, because N. loves toast, which means we end up with a lot of crusts.  It seems such a shame to throw them away that I forestall the problem by jamming them in the freezer.  At the point that they fill up a shelf all on their own, it’s time to make bread pudding, a dish that I see as appropriate for a steaming dessert, warm breakfast, straight-from-the-fridge-3pm-snack, or even lunch on a day that I’m feeling particularly lazy.

This iteration, though, I wanted to be special.  I wanted something comforting and homey and rich and delicious, but I wanted a twist.  And that’s where summertime, and N., and my dad, all come in.

Husbands are great, aren’t they?  But most of them (sorry, guys) aren’t perfect.  N. is no exception.  He’s close, oh he’s close, but here’s the thing: he doesn’t. like. coconut.  I know.  And it’s not one of those “no thanks on the coconut cream pie, not a fan” kinds of dislikes.  It’s deep.  It’s subconscious.  The man can tell if a granola bar has coconut in it with one bite.  He once declared that a cookie we were sharing tasted “odd,” and sure enough, down at the bottom of the ingredient list was ground coconut.  Curries at Thai restaurants are dangerous business.  And summer, this glorious season, is a hazardous time of year for N. thanks to sunscreen.  Once, decked out for a gardening session, I gave him a kiss and he told me my face smelled funny.  SPF coconut. 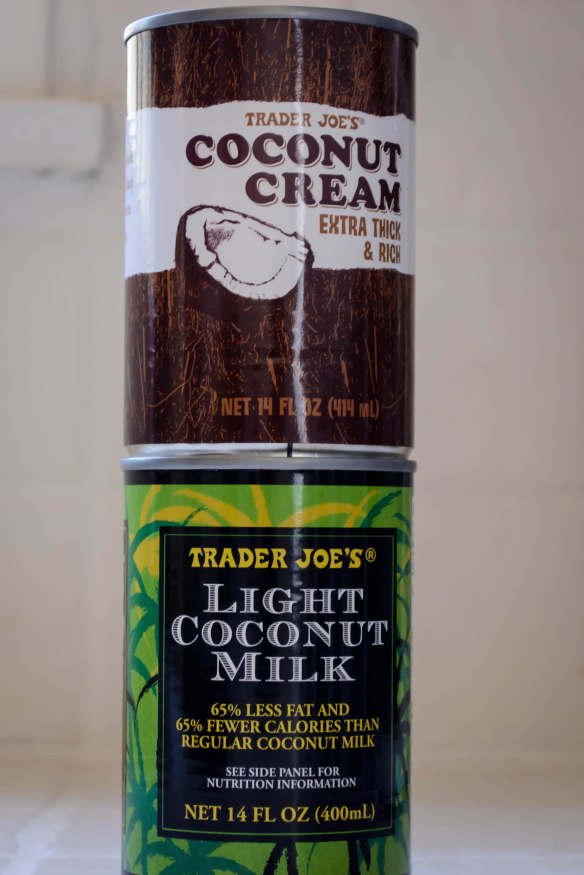 But I adore coconut.  It means vacation and swimming and luxury.  It smacks of the tropics: rum-laced drinks.  Shave ice.  Coconut shrimp (N.’s ultimate nightmare).  And, oddly enough, French toast.  When my sister and I were little, every once in a while my dad would pull down the electric skillet from some cabinet too high for anyone else in the family to reach and make coconut French toast for breakfast.  After dredging the bread in milk and eggs, he dipped each side in coconut before subjecting it to the buttery-slicked heat.

The result was a revelation.  The coconut caramelized into a crunchy, lacy, almost-burned web of texture on the outside of the bread, and its flavor made the addition of syrup all but unnecessary.  This, then, was the mission.  I set out to create my own version of this childhood memory. 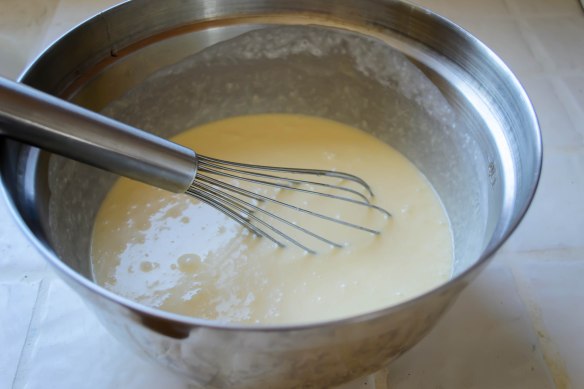 Generally I soak my bread puddings before cooking them.  I load my baking dish with stale crusty cubes, mix in whatever bits and bobs I want to add (craisins are a frequent suspect), then pour the custard mixture over the top and set a heavy dish on top to press the bread sponges down into the drink.  And then I shove the whole thing into the fridge for a few hours to promote full incorporation.

This time, though, I decided to employ a different method.  I mixed up the custard with coconut milk and coconut cream instead of regular dairy, and dumped in the bread and, after a moment’s consideration, most of a bag of sweetened shredded coconut.  Thorough mixing followed, and the result – a bowl of creamy soft crumbles of bread and the heady smell of the Hawaiian vacation I wish I were on – spoke summer.  All I could think of, while I pushed the baking dish into the oven, was a piña colada.

The problem with piña coladas, though, is that pesky piña part.  I’ve got no hatred for pineapples, don’t get me wrong, but their aggressive tartness sometimes overpowers the gentle, creamy sweetness of coconut and the spicy complexity of the rum.  A bread pudding sodden with coconut and no pineapple to be found seemed like the perfect excuse for, let’s say, a rum caramel sauce.  Why not?  It’s summer… Dark rum.  Sugar.  A daring sprinkle of garam masala.  Bubbled away in a tiny pot until barely thickened, and the dessert went from homey and comforting to decadent and warming and, oddly enough, somehow reminiscent of camping.  I swear my parents didn’t give us rum when we sat around the fire toasting marshmallows, so all I can figure is that the sweet spiciness reminded me of gingersnaps or molasses cookies or some other well-spiced treat. 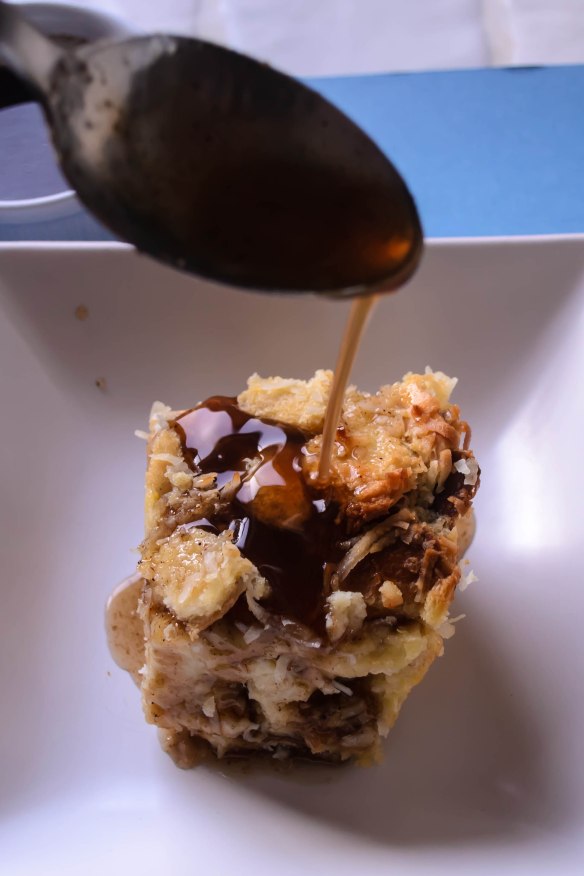 Once this heat wave breaks, I think you should make this bread pudding, with or without the sauce.  You won’t, unless you are like my coconut-hating husband, be disappointed.  And if you are, well, someone in your family will be glad they don’t have to share. 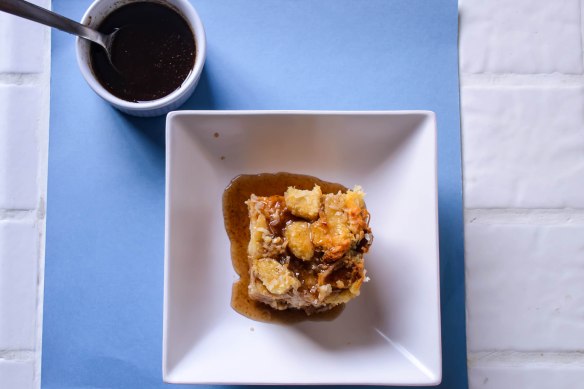 2 cups shredded coconut – mine was sweetened.  If yours was not, you might add up to 1 cup of sugar above.

This is dynamite with coconut bread pudding, but would be equally delicious dribbled over ice cream, or mixed into a milkshake, or maybe even as a puddled base for your 4th of July slice of apple pie.