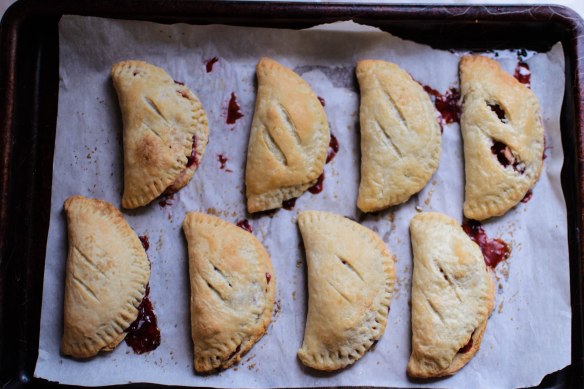 When my sister was a kid, she somehow acquired a cooking toy the internet tells me was called “McDonald’s Happy Meal Magic: Pie Maker.” Released in 1993 (feeling old yet?), it allowed the user – with parental guidance, to be sure – to create a small pocket snack that, at least in inspiration, vaguely approximated the fast food giant’s classic dessert. The “pies” this toy made can’t have been very good; from what I recall, they consisted of a piece of store-bought bread, crusts removed, that you rolled out thin and topped with a small hill of fruit filling (I remember applesauce; my sister recalls jam). You then folded the bread over the filling, placed it in a little box-like contraption and, upon forceful application of the lid, squashed and crimped it into submission. You could then sprinkle on some cinnamon sugar, and eat it immediately. 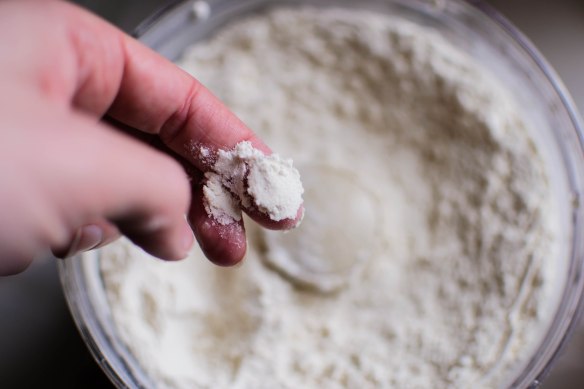 The problem with this, aside from the fact that it doesn’t sound very appetizing anymore, was that after going to all the trouble of removing crusts, rolling out, squashing and crimping, my mom would only let us eat one or two at a time. And I can’t imagine they would keep well.

Regardless of practicality or flavor, though, I remember this being a lot of fun. There was a satisfaction to assembly-line production of “dessert” items that, though not as prolific as Lucy and Ethel’s experience, meant we had the ability (if not the permission) to create high volumes of sweets. 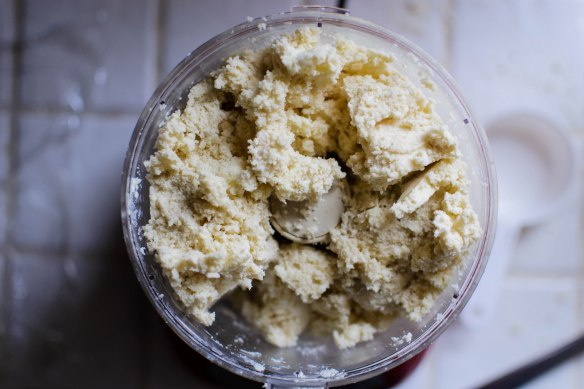 This was my introduction, though I didn’t realize it, to hand pies. A sweet rejoinder to pasties, flaky dough encases a fruity filling in a single serving that, true to its name, can be picked up (once it has cooled enough, of course) and eaten straight out of hand. It can also, of course, be topped with a scoop of ice cream, or drizzled with caramel, or a dozen other plate-and-fork applications, but the glory of being able to lift one straight off of a baking sheet and walk away utensil-free is worth noting.

A mid-winter pie should be sweet, yes, but it should also be tart and bright to wake up your sluggish, post-holiday self. I decided on apple and cranberry. I always buy a few extra bags of cranberries when they are on sale in November and December, and stow them in the freezer in case I get early spring cravings for cranberry sauce. 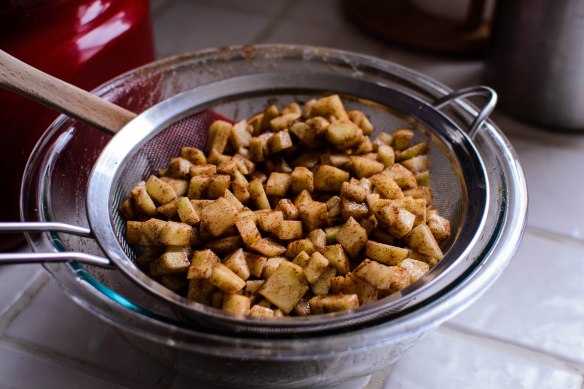 The dough for hand pies needs to be easy to manipulate, since you’ll be rolling and cutting and folding and crimping, so I went with the cream cheese dough I’ve been dabbling with lately – it is a moist dough, so it doesn’t tear as easily as some, and the cream cheese as well as butter keeps it fairly tender even when you work it a bit.

The filling is lightly adapted from Joy the Baker’s Apple Cranberry Crumble pie.  In addition to the classic procedure – toss the apples with sugar, cinnamon, lemon juice – Joy includes two extra steps: let the apples macerate for thirty minutes or so, to create a puddle of sweet, spiced juices. Rather than just dump this into a pie shell, in a stroke of genius, you bubble the juices down with some butter to create a thick, syrupy caramel, which you promptly stir back into the fruit before filling your crust. You end up with a slightly less wet filling, which is a fine thing on the mess front, and a deeper, more developed flavor. I took the liberty, and I think Joy would approve, of adding a few tablespoons of bourbon to my juice mixture before I boiled it down into a syrup.

These are lovely little pockets of sweet tartness. In the time it takes the crust to go pale gold and fluff up into pockets of flakiness, the small chunks of apples and coarsely chopped cranberries swimming in syrupy cinnamon caramel have time to cook through, but not turn to mush. Your only enemies here are time and heat – as with all butter-based pie crusts, if the butter in the dough warms up too much before it goes in the oven, the crust will not puff and flake, as the butter will melt right out of the dough before it has a chance to create layers of pastry. But you can surmount this by carefully moving back and forth between prep with the crust and the filling, making use of your fridge in between, and still put forth a dessert in about two hours. I brought one to N. to sample, and he returned ten minutes later with an empty plate and said “that was really, really good. Now I just want four more.” I didn’t tell him I’d already eaten two and was contemplating another.

I call that a win.

These will keep wrapped in aluminum foil for 2-3 days before the pastry starts to get a bit soggy. Good news, though: they reheat perfectly in a 300F toaster oven.