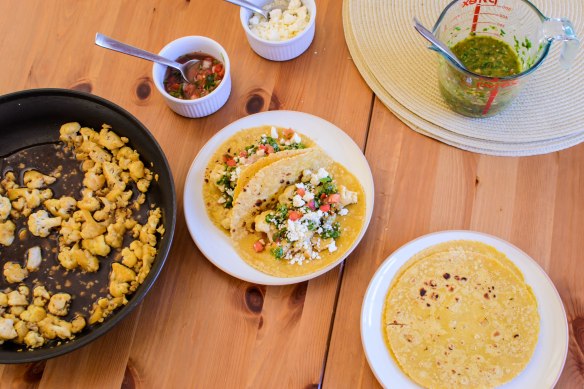 The first heat wave of the summer has hit Southern California (actually, if I’m honest, it has hit most of the country. Stop cackling, Seattle), and as a result, the things I most want to consume are tacos, grilled anything, bright, herbaceous sauces with plenty of acid, and beer. Fortunately for everyone concerned, today’s recipe combines three of the four. Entirely decent odds.

I had these tacos at a brewery restaurant in Venice, just on the other side of Highway 1. We’ve done cauliflower in tacos before, but that was a wintry dish. This one, with bright, sharp chimichurri sauce and briny crumbles of feta, is all summer. 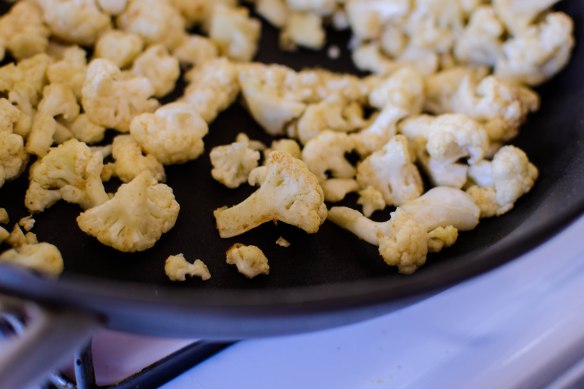 As many breweries do, this one tries to use their beers in their food as well as in pint glasses, which makes a lot of sense. A glug or two of dark beer into a cheese sauce is perfect, and braising everything from beef to cauliflower in a simmer of ale rather than red wine just fits the venue.

I suppose in this instance, braising isn’t quite accurate – a braise is a long, slow cook in liquid, and here the beer deglazes the pan and then simmers just until the cauliflower florets are tender – but the name sounds nice, doesn’t it? Anyway, the normally mild, sometimes musty vegetable picks up some color and char from a very hot skillet, then sucks in some of the nutty bitterness of whatever beer you pour, sputtering and steaming, into the pan with it. It’s not quite the same depth and richness as roasted cauliflower, but a lighter incarnation that is a bit less sweet. 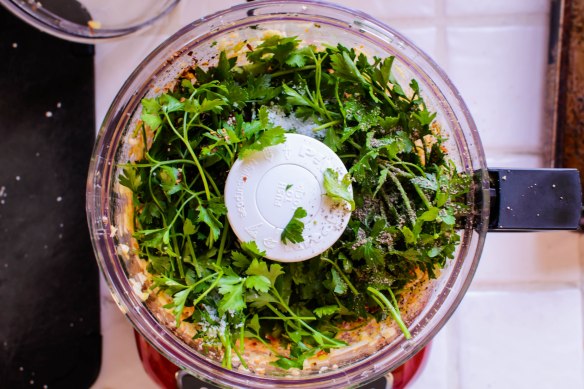 Once you pile the florets up into a nicely toasted tortilla, you spoon on some chimichurri sauce, a bright, Argentinian answer to pesto, possibly of Basque origin, that is traditionally used to both marinate and top grilled meat. It’s usually dominated by parsley, though sometimes cilantro and oregano make appearances, and gets its sharpness from raw garlic and a healthy dose of vinegar. Mine starts out traditional and then tempers the tang with red wine vinegar, rather than straight white, and sneaks in a bit of sundried tomato and green onion (though you could also use shallot) for a sauce that would make an equally good salad dressing, if you have some substantial greens laying around that need a kick. My version also uses much less oil than some, so feel free to glug in a bit more if you want a looser sauce.

A few crumbles of feta on top of the veg, and you’re ready to serve. And if you’re really feeling the beer-y flavor, perhaps a side of these black beans. Hit it, summer.

2 tablespoons shallot or the whites of green onions

¾ cup packed parsley, stems and all

2 tablespoons cilantro, stems and all