Two things come to mind when I think of split pea soup, both from childhood. In the real world, I think of my mom and sister – R. ate a lot of Campbell’s soups for lunch when she was little, and I remember Mom asking her whether she wanted some “hammy pea soup.” On screen, I remember the charming little clip from the beginning of Disney’s The Rescuers Down Under depicting how the fancy restaurant Bernard and Bianca go to gets its soup course to the table. Both memories charm me more than the actual product, so I decided, as a first real dip into the soup project, in a February that veers wildly between dreary and bright (and not just on a meteorological front), making this one over would be a rewarding project. 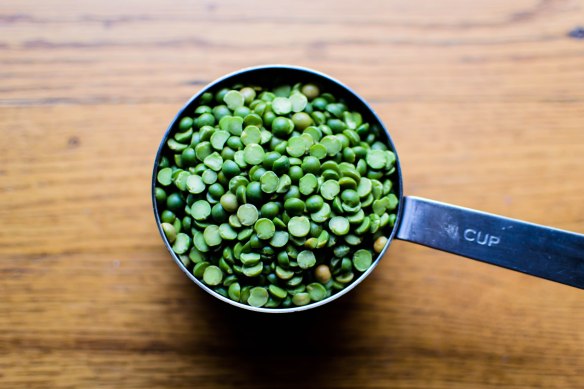 I’ll be honest, though, right out of the gate: this is indeed a project. This is not a soup you’ll have on the table, or in a mug curled up on the couch, in a half hour or so. This is a multi-step, multi-hour prospect.

Are you still here? 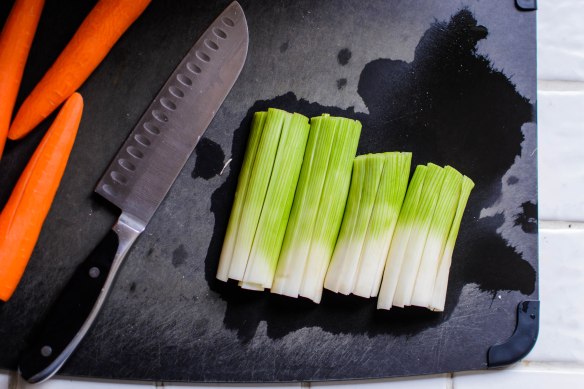 The average split pea soup is not unlike a dreary February day, the kind where you feel pressed into the couch by lack of motivation, or just unable to move away from your newsfeed. It is thick and heavy and sometimes muddy in flavor, as pulse-based soups can be. There are, I think, two ways to amend this. One is to go the daal route, amping up the spice quotient. The other, the one I chose, is to add freshness near the end of the cook time, forcing the wintry brew toward something springy, no matter what Punxsutawney Phil had to say this year. 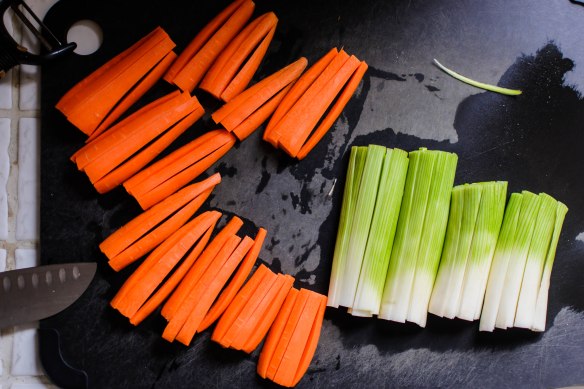 My method of freshening was almost entirely though association of the two major players. Split peas are a starchy, dry, processed product. Why not take them to a family reunion with their plump, sweet, former selves? A cup of frozen peas would jangle in at the end to brighten things up. The other major ingredient in the mix – the ham – is usually in the form of a “ham hock,” the lower part of the leg, smoked, with the skin and bone still present. Ham hock reminded me of collard greens, and I started wondering how some ribbons of greens, cooked until tender but not decimated, would do in this soup. Pairing collard greens with starchy legumes is hardly new – food historian Michael Twitty writes this important discussion of the cultural background of collard greens, including their frequent matching with peanuts in the cuisine of the African diaspora.

Split pea soup usually has some other starchy ingredient in it – most often potatoes. I opted to omit this entirely, but you could certainly add some back in, or change it up and use celery root instead for a more herbaceous flavor. Instead, I made my base simple: carrots for sweetness and color, leeks for a mild onion-y punch, and just a bit of garlic to keep things savory. At the last minute, I stirred in a handful of parsley for a final bright burst.

As I noticed when I consulted a few recipes for inspiration, differences in procedure really lie in how you treat the vegetables. Some recipes brown them first, then add the peas and broth, but this can result in disintegrated veg by the time the soup is ready. Some, to prevent this over-softening, add the vegetables part way through the cooking, but then the soup doesn’t benefit from the extra flavor a bit of caramelization and initial browning provides. The New Best Recipe cooks the vegetables in a separate vessel before adding them to the soup, and that would be fine if you don’t object to extra dishes… but I always object to extra dishes. I would rather it take longer and have less to wash up.

In my procedure, we cook everything in the same pot. First, brown the exterior of the ham hock first (I used a smoked pork shank, but they are almost the same thing). Once it is crisp and golden on the exterior, the vegetables get browned in the residual fat (plus some fatty bits and pockets, if you want to carve any off and add them), then set aside until the final twenty minutes of simmering, so they retain some texture and have the extra flavor from the pork fat. Yes, this adds some time, but you’re prepped for a project anyway, right?

I have to admit, though I always want to like what I make, I wasn’t expecting to be crazy about this soup. With the dreary, February-gloom hanging around my expectations despite attempts to create brightness, I thought I would like it but not love it.

It’s nice to be wrong sometimes, isn’t it? This soup exceeded my expectations by leaps and bounds. The play between the two kinds of peas – creamy and starchy on one hand and barely cooked pops of sweetness on the other – was delightful. The ribbons of collard greens were perfect: vegetal and tender, good flavor companions with the peas and the shreds of ham. Sometimes when I make a soup I end up freezing half of it and planning in vain to use it again, but this one we scarfed down the night of, and then for lunch the next day, and then for lunch again, and it was gone, and our bellies were warm and bolstered against the gloom of February.

This will keep in the fridge for 4-5 days in a sealed container, and reheats easily in the microwave or on the stove. You might need to add a drizzle or two of extra broth when reheating, since the peas suck up a lot of the liquid as they cook and as they cool. Delightfully, this is one of those soups that, while it’s delicious the first day, improves as it sits and its flavors mingle.

* yes, that coaster does say “I want to hold your ham.” It’s from a set my sister gave me that features misheard song lyrics, the technical term for which (can I tell you how much I love that misheard lyrics have a technical term?!) is mondegreen.