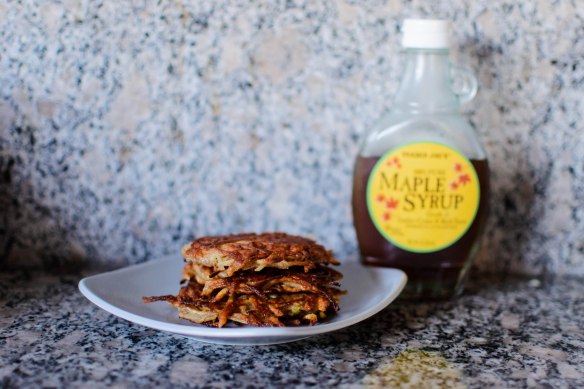 One of the great shames of holiday food, I feel, is how assertively we restrict it to holidays. Every Thanksgiving when I eat that first piece of turkey straight off the carving fork (there are privileges to being the cook), I think to myself, “why do I only make this once a year?” Of course, that’s after I’ve already had a glass of wine and a few snacks, so I’m repressing the amount of work I’ve just undergone to get that thing defrosted, prepped and suitably accompanied, and haven’t yet allowed myself to think about the labor to come of denuding its carcass, fabricating broth, and dreaming up leftovers. 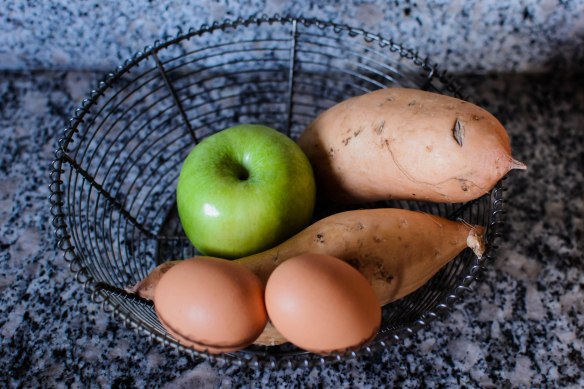 But turkey is only one example. There are so many other foods that we reserve strictly for their special day. In my family, the challah my mom taught us to make gets trotted out on Christmas Day, and sometimes on Easter. It was a surprise to me to learn that my aunt N. makes it multiple times a year, whenever she and her husband want a slice. But this is a silly thing to be surprised about. Why shouldn’t we make whatever foods we crave, whenever we crave them? I don’t think gingerbread would cease to be special just because I make a batch in March and in October as well as the night before Christmas. Besides, holding onto these foods as once-a-year-sacred means we don’t get an opportunity to experiment with them, since whatever masses you’re feeling probably want THE dish, not a derivative thereof. And okay, I admit, the old standard is good in itself, but the opportunity to play is one of the great rewards of cooking: what if I added apples to the gingerbread this time around? How would the turkey be with dill and mustard powder rubbed into the butter? 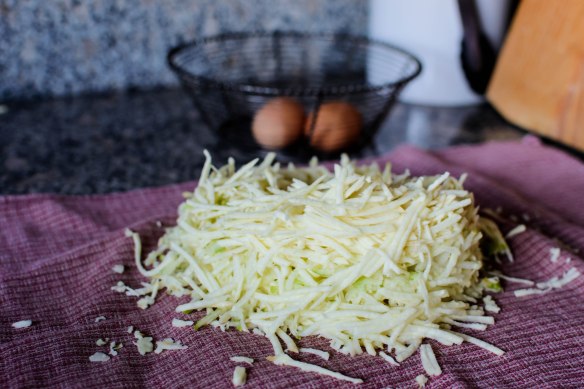 One of the great injustices of this restriction of holiday foods is that people are not, I suspect, ingesting as many latkes as they rightfully should be. While it’s true that these carry a slightly more meaningful symbolic link to their holiday than gingerbread does, indulging their delectable crispiness without pondering on the miracle of the oil lasting a full eight nights feels to me like sensible celebration rather than sacrilege. And once you get into the habit of eating latkes throughout the year, rather than just during Hanukkah, you start to realize that potato and onion are nice and all, but there are other options out there that deserve attention in crispy fried form. 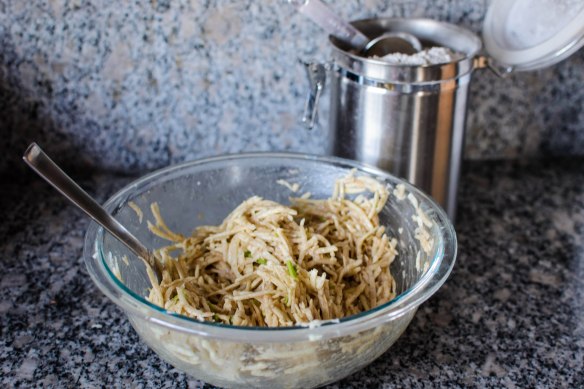 This time around, I wondered what would happen if you moved latkes from the dinner to the dessert course. Sweet potatoes seemed like a natural choice, and instead of onion, I went with apple – it adds a tart sweetness that mellows as it cooks, and it would contribute, I thought, similar water content as the onion in the original. A toss with flour and eggs, some cinnamon to lend extra autumnal feeling, the requisite bubbling fry, and then a stack dripping with maple syrup, or sweetened sour cream, or maybe a drizzle of honey for really tooth-aching indulgence. 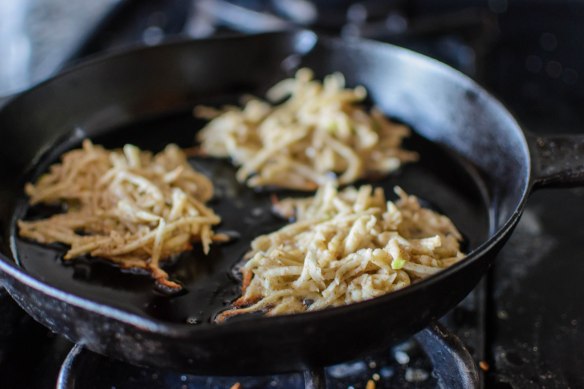 When I dug in, I found the combination of frying and sweetness reminded me ever so slightly of funnel cake – the snowy sprinkle of powdered sugar on top would have fit right in. I do suggest using orange sweet potatoes (often marketed as yams) if you are serving these for dessert; they are a little less firm in texture when they cook, but they are definitely sweeter. On the other hand, if you are looking for an interesting, produce-led alternative to pancakes, use the slightly less-sweet yellow or white fleshed sweet potatoes, and these could slide right in as a breakfast – perhaps for the holidays, okay, but in the spirit of not restricting ourselves, perhaps for any cool morning the urge for something special arises. 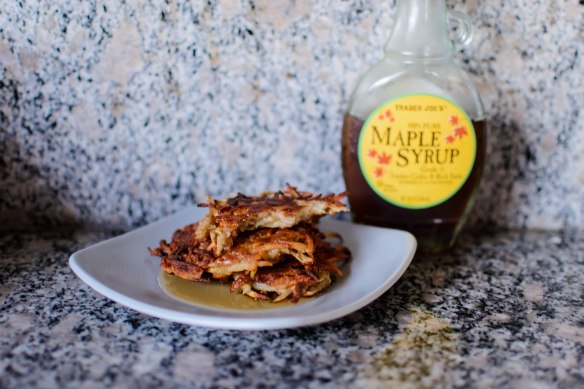 * though these are designed to be sweet, they could easily edge back toward the savory camp with the addition of black pepper or sage, and a more traditional topper of plain sour cream. Or you could make them even more dessert-like by adding other wintery spices we associate with pies and cakes – maybe even pumpkin (pie) spice in all its polarizing glory, as a nod to the season.