When we started talking about our theme for Christmas food this year (what? Your family doesn’t theme your holiday dinner? Weird.), we quickly lit on the concept of “spiced,” in part inspired by a gingerbread trifle idea I have for dessert. N., who is not a kitchen maven but does like to be able to contribute, lit up when he heard this concept and said, “I could make a winter spiced beer!” (oops, don’t read this, family; it’s supposed to be a surprise…) My brain immediately went crazy imagining flavor pairings. Weirdly, the first one I came up with was dates and orange, which doesn’t contain any “spice” components at all. We decided that in beer, that might be a little strange, but the combination stuck and simmered.

Dates and orange sounded, upon further reflection, like a duo for a loaf cake, in the vein of banana bread or zucchini bread: not too sweet, equally suitable for breakfast or mid-afternoon. I put my mom on a research mission, imagining such a pairing might show up in one of her old cookbooks. It sounded like a classic, and so right for the approaching winter holidays. The closest she found was an orange and walnut loaf (in, weirdly enough, exactly the cookbook I’d been thinking of when I offered up the assignment), so she sent me the recipe and I started to play.

Walnuts and orange sounded nice, but the recipe Mom sent had an awful lot of orange juice in it, and simply replacing the chopped walnuts with the fruit didn’t seem quite sufficient. Since I was already thinking about thick slices served with tea, I was reminded of my barm brack all studded with dried fruit that had soaked in tea for some time before getting kneaded into the bread itself. That seemed the thing to do here as well. Dates are such sugar bombs, so an hour’s steep in hot tea, with some orange juice as well for good measure, would temper the sweetness and impart some extra moisture just in case. 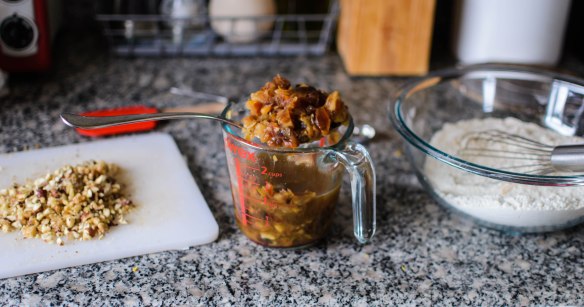 With that sorted, I replaced some of the granulated sugar with brown sugar, swapped the oil in the recipe for a touch more melted butter, opted for chopped orange peel instead of orange zest for aesthetics and the occasional bitter, marmalade-esque bite, and decided to top the loaf with chopped walnuts and hazelnuts. As a last minute decision and a nod to the original “spiced” concept that planted the idea, I tossed in some cardamom. So, in short, I completely changed the recipe. Oops. It happens. 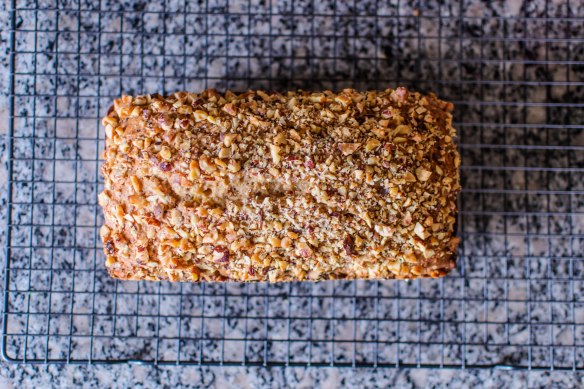 And I’m glad it did, because despite concerns about quantity – the batter was only enough to fill my loaf pan halfway – and overcooking – it ended up taking about ten minutes longer than I’d expected – this was easily the best baked good I’ve made in a while. The texture is moist and compact but still bouncy, a bit more elastic than a banana bread, and studded with meaty chunks of dates that have plumped and softened during their bath and long bake. The tea flavor is not immediately obvious, but blends pleasantly with the other orange components. I tend not to like chopped nuts inside a loaf like this, but this layer across the top is perfect for a touch of crunch that doesn’t disrupt the even-textured, pleasantly-dense interior. They toast nicely while the loaf bakes (if they seem to be getting a bit dark, cover lightly with a layer of aluminum foil during the last 10-15 minutes of baking), and the nutty flavor adds depth to the rich sweetness of the cake itself.

Originally, I had planned to take this loaf to school with me as a gift for the first twelve or so people to come into the mailroom in the morning. N. has historically not been fond of dates (it’s a texure thing, I think), so he wasn’t feeling too enthused about the outcome and I certainly don’t need to eat the whole thing myself. When, however, I had talked myself down from another full slice to just eating half of the end piece as a second helping, and when I offered N. a few bites on his way through the house and he turned all the way around to receive the rest, I realized there was just no way I could let this loaf leave the premises. Not with the pre-Thanksgiving week I’m about to have. Sorry, work family. Next time, I promise! In the meantime, treat yourself to this one. You won’t be sorry. 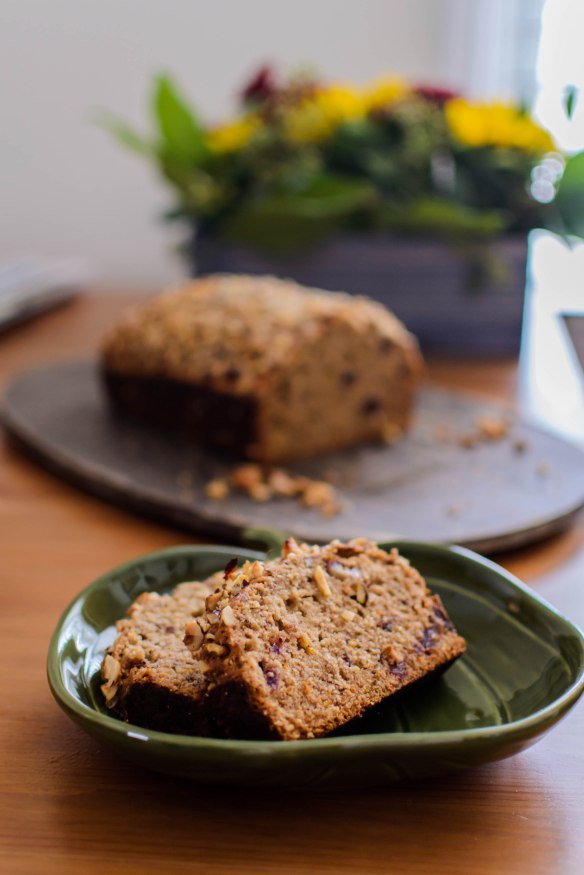 About 2½ hours (including 1 hour steeping time for the dates)