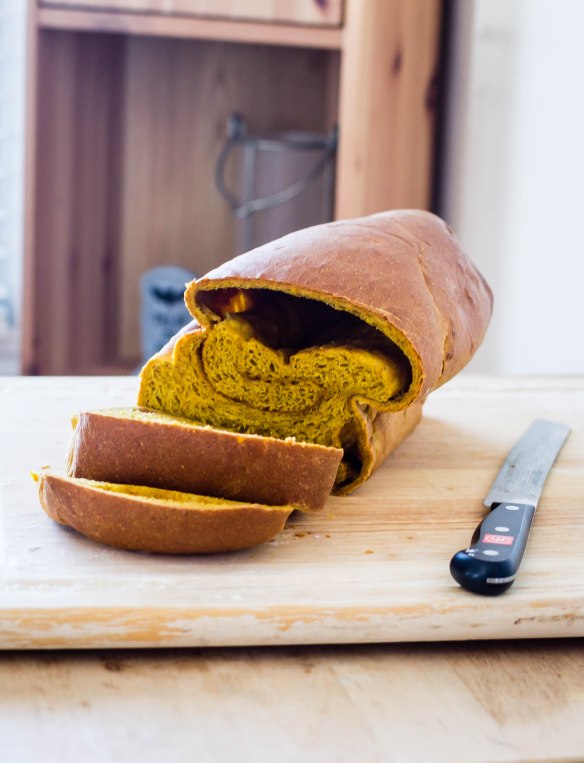 People have such vitriolic responses to the phrase “it’s pumpkin spice season” that by this point some of you have already stopped reading. I’ve heard a few interesting theories about why this is, including the idea publicized by a student at Swarthmore College a few years ago that since the drink that popularized this craze is popular among women, hating on it is another subtle way we’ve internalized sexism: pumpkin spice lattes are a girly thing, so just like other girly trends it must be devalued. Vox and various others picked up on this idea, also evaluating the pumpkin spice connection to capitalism, class, and being “basic.”

But I tend to sympathize more with the point made near the end of the article, and which I’ve seen in a few other places, which is simply: there’s enough trauma and horror and viciousness going on in that weird world we inhabit, so let’s let people find harmless joy where they can. And further, let’s face it: by and large, the mixture of warm autumnal spices that we mean when we say “pumpkin spice” are, even if you don’t want them in your coffee, frankly delicious.

So I’m on board the pumpkin spice train, and although I’m not terrifically enthused about them being swirled through my latte, a liberal dosing in pies, cookies, cakes, muffins, or breads of almost any kind is a-okay by me. And since my Trader Joe’s had a big end cap display of their pumpkin butter this week and Los Angeles is STILL resisting its usual September heat wave tendencies, I decided to take advantage of the season my calendar reports we’ve just fallen into (get it? get it?) and bake up a yeasted loaf infused with all those spices pumpkin benefits from.

My loaf started with an old favorite I haven’t worked with in a while: my Nana’s sweet dough. It’s a firm but soft product, elastic and pliable, and though in this incarnation it’s fairly sticky from all the wet ingredients, it just sighs when you roll it out in such a lovely way. I added a full cup of pumpkin puree to Nana’s original recipe, plus the requisite cinnamon and nutmeg the pumpkin spicing requires. You could use ginger and cloves as well, but this time around I decided to complete the trifecta with cardamom; its slightly citrusy brightness feels right for “fall” in Southern California. 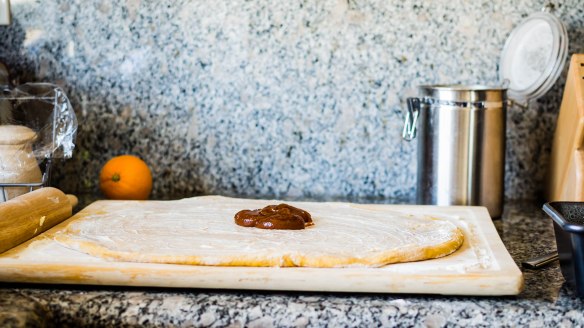 To get that luscious, deep, spicy sweetness of the pumpkin butter into my creation, I decided to do a swirl in the center of my loaf: once risen, I rolled out the dough into a large rectangle, smeared it with butter, added a glossy layer of the deep orange spread, and on a whim, zested on some orange rind for additional lift.

This is a monstrous loaf. I bake so often with only sourdough anymore that I forget how high and how certainly active dry yeast rises. Even though it climbed in both its first and second rise, the oven spring as the loaf actually baked was incredible; I couldn’t believe it was holding its shape as it pillowed, hugely, almost like a gigantic Yorkshire pudding, above the loaf pan, and was disappointed but not surprised when it deflated a bit as it cooled; a huge air pocket between the bulk of the loaf and the mountaineering dome was the source of much of its swollen majesty. 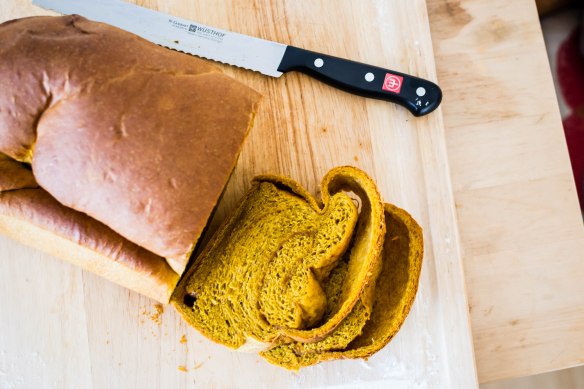 Never mind that aesthetic imperfection, though; the loaf itself was a delight. Not too sweet, it boasts a pillowy, soft-but-chewy texture that reminds me of my mom’s challah, but with a subtle pumpkin flavor pushed along by the warm spices, and a just-toothsome crust for a pleasant contrast. The pumpkin butter slathered into the center is sweet and rich, but there’s only a bit of it swirled through the while thing, making the addition of jam or preserves extraneous: it’s baked right in. To me, that means you can eat this at any time of day, just like its latte-based inspiration. Haters gonna hate, it’s true, but that just means another slice for you.