As I mentioned a few weeks ago, it hasn’t fully sunk in yet that I live in Los Angeles now. Funny little happenstances keep reminding me, and I’m stunned into bemused awareness. This didn’t happen when I lived in Orange County as a teenager. We were far enough from the big city with its food, music and fame scene, and I was distant enough in age to care, or even be aware of, what living near LA could mean.

Now that I’m a bit closer physically and chronologically, what it mostly means to me is food. Yesterday as I sat cloistered in my home office, commenting on what seemed like an endless stream of papers, my phone gave that delightfully insistent buzz that means someone from the outside world has contacted me. It was our friend J., asking if we wanted to go and grab burgers with him and one of his local friends. Dinner out? On a Friday? Meaning I wouldn’t have to tackle the embarrassing state of my kitchen just yet? Not to mention another culinary and – what would be the right word, perhaps libationary? – joyride around our new city? Yes, please.

J. showed up at our house around six and whisked us off to Plan Check Kitchen and Bar, a new-ish little burger and brew style gastropub in the Little Osaka area of West LA, where we would have dinner with him and his friend T. They have a short menu, mostly meat, but with interesting Asian flavor accents – wasabi, yuzu, and dashi creeping up in unexpected places.

I ordered the Bleuprint Burger, a patty of wagyu beef piled with smoked bleu cheese, brown sugar baked bacon they call, perfectly, “pig candy,” fried onions, roasted garlic steak sauce, and peppercress. My dining mates all got the standard: the Plan Check Burger, featuring a curious substance Plan Check calls “ketchup leather,” and a dashi-infused “Americanized” cheese, which I think meant cheddar mixed with garlic and some fish stock to smooth it out and add extra umami flavor. On the side, the table shared sweet potato fries cooked in beef tallow, served with a sweet peach ketchup, and veggie chips – perfectly crispy wafer thin slices of yam and yucca and who knows what else, paired with a slightly spicy, velvet smooth avocado cream.

Dinner was fantastic. I haven’t had a really good, moist burger cooked at an actual medium (the temperature I requested) in a long time. I drank a tangerine wheat beer with it (the name of the brewery escapes me, but somewhere in California), and it was a nice accompaniment.

While I was away from the table for a moment, somehow the conversation changed from food to, well, food. But virtual food. In fact, televised food. T., through a previous job, knows one of the guys from the company and food truck project Seoul Sausage, currently being featured on The Great Food Truck Race.

“I think they are opening a storefront,” he said, while my eyes bugged out of my head. “It’s just on Mississippi. We should go see if they’re open.”

We ambled the blocks along Sawtelle separating us from Mississippi. T. pointed out which restaurants along the way were worth checking out which, as it turns out, is most of them. I tried to make mental notes but I was feeling overwhelmed by the amount of delicious knowledge I was receiving. N. and I will just have to go back. Many times.

We turned the corner onto Mississippi and there, at the end of a short collection of shops, was Seoul Sausage Co. And it was open. Without knowing it, we had stumbled across a secret mini launch they had announced only on their website and on Twitter, and there were all three of the boys behind the counter, and suddenly I was being introduced and ordering one of the flaming fried balls they developed on the show.

I know I should be talking about the food here, but I was so starstruck I couldn’t stop grinning my way around the little space. The guys were, as I had imagined but never even hoped to find out, super friendly and happy to see us – and everyone else who stopped in – and being very properly and apologetically closed-mouthed about the results of the show (the finale is tomorrow – Sunday, at 9pm). N. chatted them up about beer, encouraging them to carry Ninkasi if it ever appeared on their radars. I couldn’t help but mumble something about how I hoped they would/had/did/whatever-it-is-taped-tv-is-so-confusing win before I gave into the beautiful, sizzling-hot fried riceball they handed me. 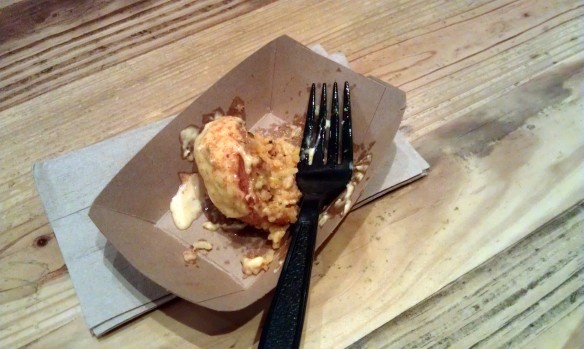 It was delightful. Delicate rice in the middle mixed with cheese, spices, and who knows what else. Crisp breaded crust around the outside, and a slightly spicy sauce squeezed over the top. It reminded me of the kind of sauce you get on certain spicy sushi rolls, and it paired so nicely with the rice. This is an excellent late night snack, and N. and I assured them we would be back again after their official opening next week. I was halfway through my little after-dinner snack before I remember that, despite my unwise choice to venture out on a Los Angeles food adventure without my camera, I do have a smart phone fully capable of capturing an image.

Flaming fried balls conquered, and me still in some disbelief that we had just been to Seoul Sausage and met the guys in charge (I wanted to know everything but asked nothing: what was Tyler Florence like? Were you getting all those truck stop phone calls at once, or did he call each truck one at a time? What did you think of Nonna’s Kitchenette? Did you win? Did you win? Did you win?) we stepped back out into the night (which we were surprised to learn was still so young – only 8pm yet) and resurfaced at the Formosa Café in West Hollywood to share a round of drinks. I asked for a lemon drop, but the bartender mixed me a vodka daisy instead because he likes the flavor better, and so did I. Vodka daisy with a sugared rim is apparently my new cocktail of choice.

As we belted ourselves into J.’s car again, he asked if we minded swinging by Canter’s delicatessen on Fairfax. He wanted a pastrami sandwich for the road back to Orange County, and of course we obliged. Once inside, I was attracted not to the sandwiches, but to the bakery counter, where my taste buds immediately performed their own version of the honey bee’s waggle dance to communicate a single word: éclair. N. wandered up behind me and asked if I was going to get anything, and as I gazed at the shelves packed with donuts, cookies, babka, danishes, chocolate studded croissants, cheesecakes, a big layer cake with the word “rum” frosted in chocolate across the top, all I could think about was an éclair.

And there they were. On the bottom shelf. Thick, ganache-glossed masterpieces. My eyes were bugging out again, I could feel it. With my new little treasure safely enclosed in a pink bakery box and tucked under my arm, all was right with the world. When I dug in, gentle fork pressure forcing the thick, sweet pastry cream out across my plate, the world was more than right. The dough was tender-crisp, and if I’m honest it may have been moving a bit toward staleness after a day on the shelf, but the flavor of the custard and the ganache more than made up for it. It was a stellar dessert for a starstruck evening. 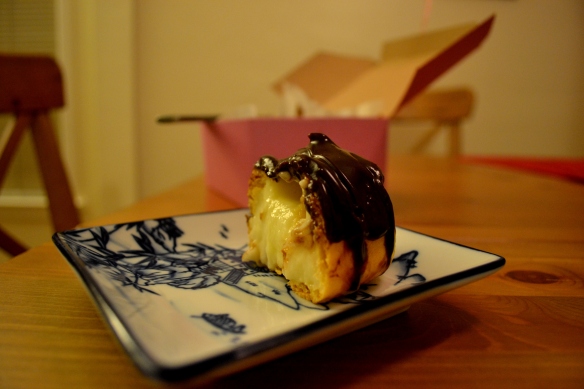