Considering my avid distaste for filling either roast bird or pork chops with stuffing (with the exception of chicken cordon bleu, which I love), I often forget the merit possible in stuffing other things – namely fruits and vegetables.  The built-in cavities in fruits like peppers and winter squash, and the concave shape of stemmed mushrooms seems to call out to be filled with something delicious, and too often I am deaf to those calls.  Fortunately this week’s Bittman choice reminded me to open my ears a bit.

This dish was a clear win.  For those of you who don’t like mushrooms, I can see this same parade of ingredients marching well together in a hollowed out zucchini half, but you will be missing the earthy indulgence of mushroom – that rich, meaty, brown flavor that is so intriguing and so deliciously musky.

5-6 crimini mushrooms, chopped (I used these because I had some lying around.  If you didn’t have them, you could certainly omit them and just use the guts of the portobellos)

4 portobello mushrooms, stems removed, gills and insides excavated (you want only a thin shell so you can fit the maximum amount of stuffing)

scant tsp. each thyme and rosemary 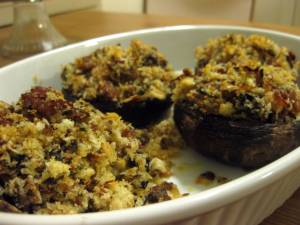 I turned the oven on to preheat to 350F and then set the prosciutto to cooking in a pan on medium high with just a touch of olive oil to help it along.  While it slowly rendered and crisped and crackled toward doneness, I prepped my vegetables.  When the meat was almost crispy, I added garlic, green onions, chopped mushrooms, herbs, and a bit more olive oil to the pan.  While that cooked down for a few minutes, I tore up half a loaf of leftover French bread and ground it into coarse crumbs in my food processor.

I dumped the crumbs into my skillet of veggie, turned the heat off, and added another tablespoon or two of olive oil to bind the ingredients together.  At this point I considered adding Parmesan cheese, thinking of both its binding power and its stellar flavor, but I tasted the crumbly filling and realized that the prosciutto was making it quite salty enough, and an extra pow of sharp cheese might be overkill.

I loaded the mushrooms to bear with heaping spoonfuls of filling, tamping it down in each cavity to fit as much as possible.  This was almost too much for four medium portobellos to handle.

With one last, loving drizzle of olive oil over the tops of my brimming vessels, I put the mushroom-laden casserole dish in the oven for half an hour.  Quick steamed green beans in the final minutes and we were ready!

Cutting into one of these roasted boats was an explosion.  The filling did not adhere to itself and instead came collapsing down onto the plate and covered the green beans.  This was not a bad thing.  In fact, the bread, now flavored with the porky richness of prosciutto and the fruity softness of olive oil, was a crisp and delectable crunch atop my barely tender beans.  As for the mushroom itself, it softened and took on a thick meatiness that was perfect with the prosciutto.  The crunchy bread crumbs soaked in the earthy juice of their vessel and we scarfed down all four mushrooms between the two of us.  And then I may have scraped the baking dish clean with my fingers.

1 thought on “Loaded to bear”