The thing about Mark Bittman’s make-ahead sides is that they are all ostensibly created with a main of turkey in mind.  They are, after all, Thanksgiving inspirations.  Therefore, when I ask myself the inevitable question each week “what should I serve this with?”, I suppose I shouldn’t be surprised when the first thing that pops into my head is “that would taste really good with roast fowl!”  Of course it would.  That plays into the composition of Bittman’s list.

But we don’t want turkey every week, or chicken, for that matter.  Lately, both for ease, for cleanliness, for cost, and in some minor and embarrassingly halfhearted respects for moral and environmental concerns, I’ve been more drawn to vegetarian fare.  Potatoes, rice, grains, beans: these guys don’t cross-contaminate my kitchen.

So I’m having to be unusually creative in my search for accompaniments for the accompaniments I’m cooking.  This week N. chose, from a short list, an interesting combination:

“43. Toss chunks of butternut squash with butter and curry powder.  Roast until half-tender, then stir in chunks of apple and some maple syrup.  Cook, shaking the pan occasionally, until everything is nicely browned and tender.”

The mystery about butternut squash is, for me, as with some other orange produce, whether to treat it as a starch or a vegetable.  It seems to occupy some strange and unnecessarily cryptic middle ground.  It’s not green or leafy, but it’s also clearly not a tuber, no matter how much its deep autumnal color reminds me of a good hearty yam.  Yet, if I’m not serving meat with dinner, pairing a butternut squash roast with  vegetables seems not substantial enough, but opting to serve it alongside, say, mashed potatoes, seems excessively filling and somehow repetitive.

I opted for another strange middle ground and went for sauteed red chard stirred into quinoa.  As a nod to the seasonal intentions of the squash dish, I cooked my quinoa in turkey broth I made and froze a day or two after Thanksgiving.  I like the deeper, richer flavor that results from cooking grains and small pastas in broth or milk rather than water.  So our dinner basically consisted of two side dishes, but I decided I didn’t really mind.

Here’s how it went: 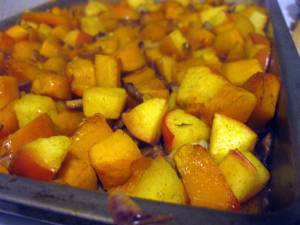 2 apples (I used Braeburns) quartered, cored, and chopped into chunks

1 onion, diced (I thought the extra savory flavor would be nice, since apples and squash are so sweet)

I tossed the chunks of squash on a cookie sheet with melted butter and curry powder, then slid it into a preheated 375F oven to roast for 20 minutes.  Meanwhile I prepped my apples and onions.  After 20 minutes when the squash chunks were just beginning to give, I pulled the pan out of the oven and added the apples, onions, and maple syrup – a decadent drizzle over the top that I hoped would pair well with the curry – mixed it all around together, and dropped it back in the oven for another 20 minutes (but really, it took almost half an hour).

While the roasting fruits softened and the maple syrup made suggestions of carmelization on their corners, I addressed our other side dish.  I stripped the chard leaves from the stems, chopped the stems into a fairly small dice, and plunged them into a pot with a couple teaspoons of olive oil.  I sauteed them over medium heat until they were just beginning to soften, then added the quinoa.  In one of my favorite quinoa recipes, Danny (the Chef of Gluten-Free Girl and the Chef ) suggests toasting the quinoa before adding any liquid, much as you toast the rice in a risotto before deglazing the pan.  I toasted for a few minutes, then poured in the turkey stock and clapped on the lid.  When there were only five minutes left on my timer, I added the chopped chard leaves into the mix, stirred it together well, and replaced the lid so it could finish cooking.  It worked perfectly.  The chard had just enough time to steam as the final few tablespoons of water were absorbed, but not enough time to overcook and lose all semblance of texture.  I can’t stand that sliminess that greens sometimes get after too much contact with the heat.  To my delight, the quinoa had taken on a lovely deep rosy color thanks to the chard stems, and the toasty nutty crunch of the grain worked really nicely with the healthful greenness of the chard leaves. 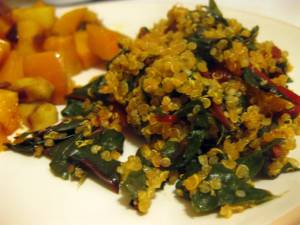 When I pulled the butternut and apple mixture out of the oven, all I could smell was sweetness and curry.  The maple syrup had thinned in the heat, but cloyed onto the chunks of fruit as it cooled again.  The mixture was really nice.  Butternut squash and apples are very good friends, and leaving the skins of the apples on was a wise choice because it added textural interest to the dish.  The curry made the flavors deep and warm and spiced, and the maple syrup was a nice hit of sweetness.  This one I would make again with no reservations, and only one (okay, maybe two) changes.  I put the diced onions right onto the cookie sheet, raw from my cutting board.  When I make this again, I will soften them lightly in butter first.  They didn’t roast quite long enough to quell the astringent tang onions sometimes have, and I could feel them in the back of my throat afterward.  Mellowing them out on the stovetop first would be the right thing to do.

To change it up from curry, I think garam masala would also be delicious on this mixture, and fortunately (and conveniently!) enough, Aarti of aarti paarti has just posted suggestions for making your own!  How timely!  How fortuitous!  Let’s make some!  And then, make this autumnal dish.  Maybe with turkey.  Maybe with chicken sausage.  Maybe, as I realized only after dinner was over, with potato masala burgers from Trader Joe’s.  What a congenial blend of spices that would be to curry favor with your family!

Apologies for the punning… I couldn’t resist.