I’ve complained before about the sometimes-too-sweet-sweetness of sweet potatoes, and of the potential dangers of the salty-sweet combo (and at the same time, too!), but sometimes they do work.  And when they work, and work well?  Incredible.  If you have any love for sweet potatoes at all, you MUST try this dish.

This sounded like it had potential, and didn’t require a lot from the store.  Double bonus points already.  Here’s what I used:

2 medium sweet potatoes (mine had orange flesh, so I guess that means they may have been yams) 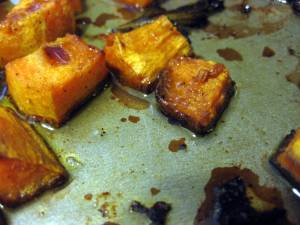 Since I don’t know what Bittman’s preferred roasting temperature is, I guessed that 400F would likely be fine, and cranked on the oven to preheat.  I peeled and then chunked up my sweet potatoes, trying to keep the cubes about 1-inch in size, so the outsides wouldn’t burn before the insides were cooked through.  I cut my green onions into approximately 2-inch lengths, then tossed them together with the sweet potatoes and both kinds of oil on a cookie sheet.  The amount of oil you use will depend on how big your sweet potatoes are – you want them to glisten and smell strongly of sesame, but not be drowning in a puddle on the bottom of the sheet tray.  We’re roasting, not frying.

I slipped the tray into the oven and let it roast for almost an hour, checking every 15 minutes or so for doneness, browning, and to turn things over.  At 45 minutes in, the chunks of sweet potato were meltingly tender, but they weren’t really getting brown on the outside.  I shimmied the oven temperature up to 450F and tossed everyone around again.

A quick 15 minutes later, I rescued the tray from the oven to see perfection.  The sweet potatoes had crisp crusty edges, the green onions were wilted and faded (this sounds bad but it was a very, very good thing), and when I drizzled the soy sauce over the whole thing the sizzling smell was delightful: salty and earthy and deep.

We tasted, and then we inhaled like ravenous, sweet-potato-deprived beasts.  This was SO GOOD.  The sweet potato flesh was as tender as a puree, but the caramelized sides offered a captivating chewiness.  True caramel, I think, has to stick to your teeth, and these clung to our teeth just like candy.  But they weren’t overly sweet.  The combination of green onion, sesame oil, and soy sauce gave a decidedly savory swing to the dish, and possessed that magical saliva inducing quality.  In fact, though we had two other components to our meal aside from the sweet potatoes, nothing made it into the fridge to store for another day.  N. and I kept finding ourselves back in front of the platter, even as we went about the remainder of our evening.  Passing through the kitchen to get a glass of water, and another chunk of potato, glistening with oil, gone.  Loading a plate into the dishwasher, and a straw of onion, wrapped around itself with just-burnt edges, sliding across my tongue.  Bedtime found the plate empty, with only the residue of soy sauce and sesame pooling in the middle.  N.’s assessment: “You can make this anytime.  Whenever you want.  Win.”

True, but I would make two changes.  First, I would start the oven out at 450F rather than 400F.  The potato chunks were cooked through well before I liberated them from the heat, and a higher temperature would brown them faster.  For the same reason, however, I would also add the onions in partway through the cooking process.  Instead of roasting them for the full hour, I’d throw them in at the half hour mark so they wouldn’t burn.

At this higher temperature, it could be that a full hour isn’t necessary – maybe only 45 minutes.  Or 35.  Or 55.  Check often and toss well, and when they are cooked through and the beautiful orange and bronze of autumn in the Northeast?  It’s time to scarf them.

The sweet potatoes were really the stars of our meal, but we had them with broccolini and some pan-fried yellowfin tuna that I’d marinated for ½ an hour in garlic, ginger, lime juice, olive oil, and a tiny splash of soy sauce.  Successful, if a bit overcooked (I like my fish rare, N. likes his almost well done), but nothing compared to the caramel crusted stars of the show.