Tomorrow morning, early, before the clouds burn off, before the fog-drizzle abates, N. and the dog and I will get into the car and drive east, and north, and east and north some more, and meet up with my parents to (gasp) camp for a couple of nights at the Newberry Caldera in the Deschutes National Forest.  We are ill fit for this adventure.  We own, between us, one down sleeping bag (which is really on possibly-permanent loan from my parents), two backpacks, and 75% of a set of doggie protective booties (what happened to the fourth one?  Did it tumble out of the car on a previous adventure?  Did it get sucked into the abyss in the back of one of our closets?  Did she eat it?  I have no idea!).  My parents are bringing us a tent, a second sleeping bag, and possibly a couple of nylon air mattresses.

But at least we won’t be without sustenance.  Our sad lack of camping gear will be made up for through this delicious (I hope) portable breakfast, which we will joyously share: 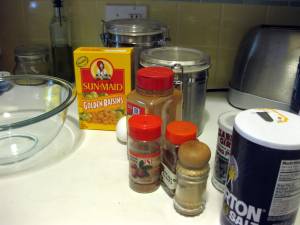 “86. Spiced Muffins: Mix 2 cups flour, ¼ cup sugar, ½ teaspoon salt, 1 tablespoon baking powder, 1 teaspoon ground cinnamon, ½ teaspoon each allspice and ground ginger, and a pinch of cloves. In another bowl, combine 1 egg, 1 cup milk and 3 tablespoons melted butter. Stir the wet ingredients into the dry until just combined, adding milk if the batter seems too dry. Spoon into greased muffin tins and bake for 20 to 25 minutes at 375 degrees or until done.”

I haven’t tasted these yet, so I can’t yet reveal the no-doubt marvelous flavor and texture they possess, but I can tell you about the process of making them.

I didn’t have any allspice, so I used nutmeg instead.  Nutmeg is pretty strong, so I didn’t want to overpower the other spices by using a full ½ tsp.  Just a pinch, then.  I also thought these might be a little one-note, a little too homogenous, despite how excited I was about the spices, so I scattered about half a cup of golden raisins in along with the dry ingredients.  A little punch of fruit would add brightness and natural sweetness.  I think grated orange zest or dried currants would also be lovely.

When I whisked the dry ingredients together (I like a whisk rather than a wooden spoon, or even a spatula, because I think it mixes more thoroughly and adds a little air to the batter.  Since I never sift my dry ingredients – I’m much too lazy for that – I like thinking the whisk does some of that work for me after all), the flour turned a pale, pale pinky tan from the spices, and a warm, Christmasy smell wafted up from it.  I love that earthy spiciness ginger and cinnamon have, and the tingling deep mystery of the cloves.  Incense and aromatherapy, right in my kitchen.

I made a well in the center of the fluffy mix and poured in the wet ingredients, then stirred until barely combined so the muffins would (again, I hope!) remain tender.  I took a tiny taste while I filled the tins, and I can tell you, the flavor was very promising.  It was subtle heat and harvest spice against my tongue, like a pastel gingerbread.

I baked them for 22 minutes, at which point the toothpick I inserted in the largest dome came out with only a faint moist crumb clinging to it.  I’ve had too many tough, overdone muffins in my day (most of them my own fault, sadly), so that seemed perfect. The tops were crisp to the touch but the insides felt moist and tender crumbed, at least from a toothpick’s prodding standpoint.  Ah, projection.  How strong you can be!

* Update: the muffins had excellent flavor – warm and spicy and earthy, as I had hoped – but were sadly a bit on the tough side.  They had a moist crumb, but it was not particularly tender.  They were either a bit overbaked, or needed some additional liquid in the batter.  Still, we ate them greedily on a very cold morning (33F just before the sun came up, almost 40F by the time coffee was ready), and found them best dunked into a blessedly hot beverage, where they eagerly drank up the liquid and collected the flavors of the drink on top of their own spicy blend.