This week, with a camping trip under our belts, I wanted distinctly contrasting things: to be back in my kitchen, and to have exquisitely simple things to make.  This salad seemed to fit that bill, given how easy it was to throw together AND how ripe it is for additions, which I will discuss in a bit…

“69. Shred carrots and cabbage (red, savoy or Napa). In a blender, whip olive oil, lemon or lime juice, a stemmed and seeded jalapeno, garlic and cilantro or parsley. Toss with the vegetables.”

This sounded easy and zesty – a new, simple take on coleslaw without the weighty mayonnaise.  I used the following:

½ green jalapeno, seeded (that was all I had.  Use more, if you like heat)

honey to taste (around 1 TB)

For ease, I decided to use my food processor instead of the blender Bittman suggests.  I shredded the carrots using the shredder disk, which could not have been simpler.  I tried to do the same with the cabbage, but the shreds were too fine – almost like confetti-ed tissue, so I sliced the cabbage very finely with a sharp knife instead.

Once the carrot shreds and cabbage fluff were out of the food processor and ensconced safely in a big salad bowl, I fitted the machine with the blade instead and added the first 4 dressing ingredients.  I buzzed those until the jalapeno and garlic were finely diced, then began drizzling in the olive oil until a  dressing formed.  It didn’t emulsify and thicken as nicely as I would have liked, which I suspect was because 1.) I added the olive oil too quickly, and 2.) the food processor was not the best tool to use to create an emulsion.  Still, it smelled fresh and verdant and zesty.  I gave it a taste and decided it needed some seasoning and some sweetness, and therefore added salt, pepper, and a short drizzle of honey.  Then I poured just enough dressing to coat and moisten over the vegetables.  Adding the whole quantity would have caused a flood, so I stuck with a little over half.

As a very simple salad, this was good.  The vegetables were crisp and fresh, and the dressing had a definite citrus kick and a suggestion of heat.  As a foundation, or perhaps as a topping for pulled pork or a barbeque sandwich, this would be ideal. 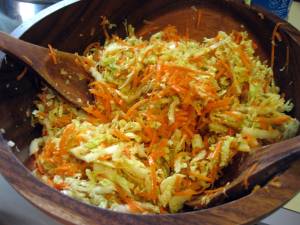 I found myself imagining more, however.  You could add craisins to this, or golden raisins, and capitalize on the mild sweetness of the carrots and cabbage.  You could add toasted walnuts or sunflower seeds and get a different kind of crunch.  If you like a little extra zing, you could pop in some mandarin orange or grapefruit segments, or maybe even shredded or finely sliced green apple.  For additional vegetation, agonizingly thin slices of green or red onion, or another color of cabbage.  The adventurous might opt for radicchio or endive, though if you add such bitterness another tablespoon or two of honey in the dressing would be welcome.

But for me, if I’m honest, what was missing was not sweetness, or crunch, or bitter variety.  What was missing for me was the creamy, fatty, mouth-coating perfection of mayonnaise.  I couldn’t separate the shreds of cabbage and carrot from the perennial American picnic classic.  I wanted my veggies robed in that clumpy goopy stuff of sandwich and potato salad dreamscape and overdressed nightmare.  I didn’t want a simple healthy vegetable salad, apparently.  I wanted it to be coleslaw. 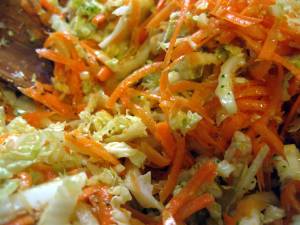 Try some of these combinations out, because this would make a nice, light addition to grilled proteins, and if you do, tell me how you like it.  But don’t expect me to report on any of these fancy-pants ideas.  Because I just bet you can guess what I’ll be adding to my leftovers…