To me, there is no better title for this entry than Bittman’s designation.  Sometimes things don’t need to be complicated or alliterated or made cleverer.  Sometimes all they need is a little story to get them started.

For the past five years or so, my family has been driving up to Oregon to spend Thanksgiving at our house.  Since we discovered a recipe for Chipotle Mashed Sweet Potatoes, which melds the flavors of autumn with the heat of adobo sauce, we haven’t needed any additional fixings for our tubers.  This was not always true.  When we used to share Thanksgiving with a very dear set of family friends, L. inevitably made sweet potato casserole.  You know the one.  The sweet potato casserole.  Boiled sweet potatoes, mashed or beaten smooth.  Sweetened – as she was always proud to proclaim – only with orange juice.  Smoothed into a square glass baking dish and then topped until no hint of orange could be seen with a careful and meticulous layer of miniature marshmallows.  Thieving hands were scowled at.  Broil to perfect, swollen, golden-brown puff.

I liked this.  Well, I liked the idea of it.  Mashed sweet potatoes are delicious, and toasted marshmallows are my favorite part about a campfire.  But together, especially next to turkey and dressing and tart wonderful cranberries, it was never my favorite.  Bittman offers a grown-up alternative:

“60. Marshmallow topping for adults: Roast or boil chunks of sweet potato, put them in an oiled baking dish, top with dots of cream cheese, and sprinkle with a mixture of brown sugar, chopped pecans and chopped fresh sage. Broil until lightly browned.”

In my imaginary food dictionary, this would appear under “decadence.”  It just sounds so rich and so perfect, without the chalky powdered sugar edge of marshmallows.  Here’s how it happened:

Scant ½ cup brown sugar, or perhaps less.  It was a bit sweet.

About an hour before you intend to broil this, stow an 8 oz. block of cream cheese in the freezer. This is just enough time to allow it to firm up enough to cut into chunks without mushing all over your hands.

Toss the sweet potato chunks in olive oil, salt, and pepper, then roast them on a baking sheet for 35 minutes or until soft and slightly caramelized.  While they roast, combine the pecans, brown sugar, and sage in a small bowl and toss together well.

When the sweet potatoes are tender, transfer them to a lightly oiled 9×9 inch glass baking dish.  Remove the cream cheese from the freezer and cut it into small chunks.  Scatter the chunks of cheese evenly across the surface of the sweet potatoes, then crumble the pecan mixture evenly over the beautiful field of orange and white you’ve created.

Broil the whole delectable mess until the sugar caramelizes and begins to melt, and the cream cheese goes a little weak in the knees.  Don’t let it go too long or the sugar will burn.

We did just that.  There was very little left over for repeat meals, so I had no excuse to repurpose the leftovers.  But in this case I wouldn’t have needed to, because it was stellar.  A bit on the overly sweet side, perhaps, but that’s what made it such an accurate modernization of the marshmallow madness it mimics.  The cream cheese, broiled to the edge of melting, was a tangier, softer version of the marshmallows from the original, and its form in small chunks just losing their shape made it look similar too.  Pecans and sweet potatoes are great friends, and with the addition of the brown sugar they became the equivalent of that couple on Valentine’s Day.  You know the one I mean.  Except you get to eat this, so it’s much better than intruding within a 20 foot radius of that couple.  The sage was an earthy, herby warmth that I wouldn’t suggest omitting.

My only suggestion about this, aside from perhaps cutting back a bit on the quantity of brown sugar, would be to add a little salt into the topping mix.  It would be a nice extra bite to bring out the pecan flavor, and salt with brown sugar is just so darn tasty.

This was delicious with Brussels sprouts seared in a cast iron pan, but it would be equally good with stuffed pork chops, or roast chicken, or the big Thanksgiving bird itself.  Or just in a big bowl, with a big spoon, and a private table.  And no one looking.  Fanciest take on sweet potato casserole I’ve seen in a while. 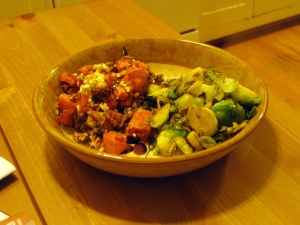 If that’s not fancy enough for you, I thought of a way of making it even fancier.  For appetizers, cut the sweet potatoes into rounds instead of chunks.  Roast and mix topping as directed.

Instead of freezing the cream cheese, let it come to room temperature and put it in a piping bag with a star tip.  When the sweet potatoes are roasted and have cooled a bit, pipe the cream cheese in a pretty little whirl atop the sweet potato round, then sprinkle with the topping and broil as before.  Presto!  Brilliance in two little bites.  No marshmallows required.

4 thoughts on “Marshmallow Topping for Adults”