As buried in pages as I am, it’s difficult to believe that I’m only one week away from “summer.” Well, four days of class and about 120 mixed papers and exams. This is difficult to bear – something about this semester has been more burdensome than usual. It’s hard to know how to feel when there is so little time but so much work between me and those glorious two and a half months of no work but also no paycheck.

As if matching my own cloudy-with-a-chance-of-vacation feeling, our weather lately has taken turns back and forth between what looks like summer and what, for here, passes as wintry. Typically June mornings in Southern California are overcast such that they even have their own nickname: June gloom. We’ve hit this a trifle early, it would seem, with the last week sporting what my officemate helpfully titled “May gray,” and temperatures barely grazing 70F. This is, it would seem, an uncertain entree to summer. 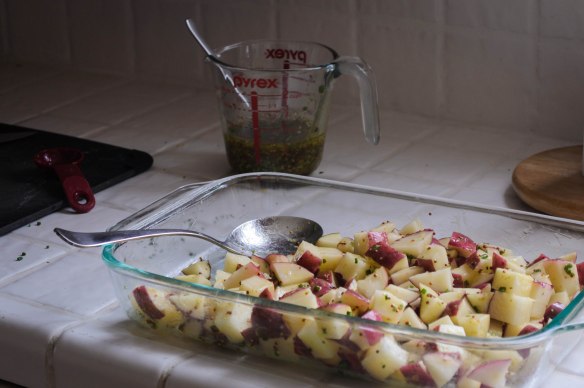 Speaking of entrees, let’s talk food. Specifically, let’s talk potato salad. It’s not summer just yet, so it’s a little soon to dive into a platter of mayonnaise-robed spuds shot through with crisp cubes of onion and pickle. But because I surely am not the only one longing for everything a good potato salad represents, this adaptation from The Bon Appétit Cookbook is a perfect compromise. Here, roasted potatoes provide warmth and comfort, all caramelized edges and creamy softness, but a sharp, tangy mustard vinaigrette and crisp-tender green beans push the dish salad-ward.

To fill my yen for green vegetables, I’ve doubled the amount of green beans and reduced the quantity of oil from the original. I’ve also eliminated walnuts and changed up the herbs to suit my fancy, and gone with whole grain rather than dijon mustard, because I like the tart pop of the little seeds. This can be eaten at room temperature as well as slightly warm, but because a generous scattering of blue cheese adds a creaminess and funk to the party, you don’t want things too heated, lest melting commence. 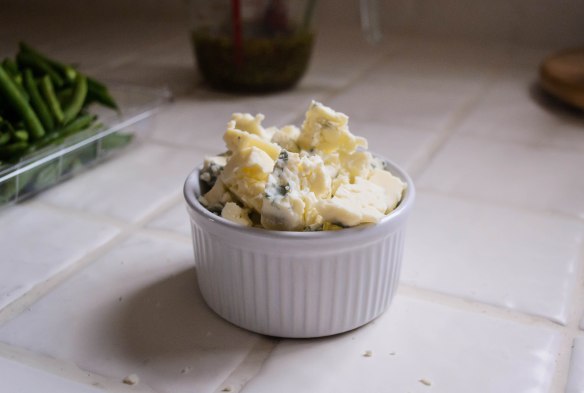 This is the kind of dish that contents me as an entree. I suspect it would happily welcome a handful of crisp crumbled prosciutto or diced hard salami, if you want a little meaty component. If you’re treating it as a side dish, I highly recommend sausages of any variety to round out the plate, or a nicely roasted or grilled pork tenderloin.

As most things are, this was just as good on day two heated up just enough to take the chill off, and topped with a fried egg still runny enough in the yolk to offer a velvet golden cascade that turned the salad into something more like a hash, my own ideal of comfort food. It’s the very thing you need, when you know summer is coming but you can’t quite see the light yet.

Adapted from The Bon Appétit Cookbook

Serves 6 as a side dish

16 ounces green beans, trimmed of stem ends and halved on an angle