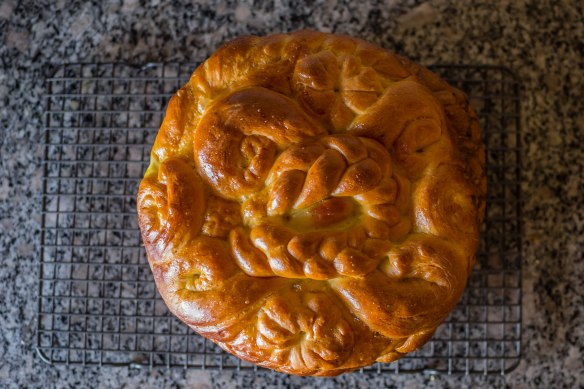 For our first entrée into European breads, we’re again following a holiday track. Paska is a traditional Ukrainian Easter bread (there’s a Russian version as well, called kulich), tall and stately, enriched with milk, butter, sugar, and a boatload of eggs, and ornately decorated in celebration of both the holiday and the season. Sometimes it includes citrus zest, sometimes a splash of liquor, and sometimes even raisins. Typically the decoration, which can use up to a third of the total dough, includes braids, twists, intricate crosses and sun symbols, and sometimes flowers or birds or other indications of springtime. 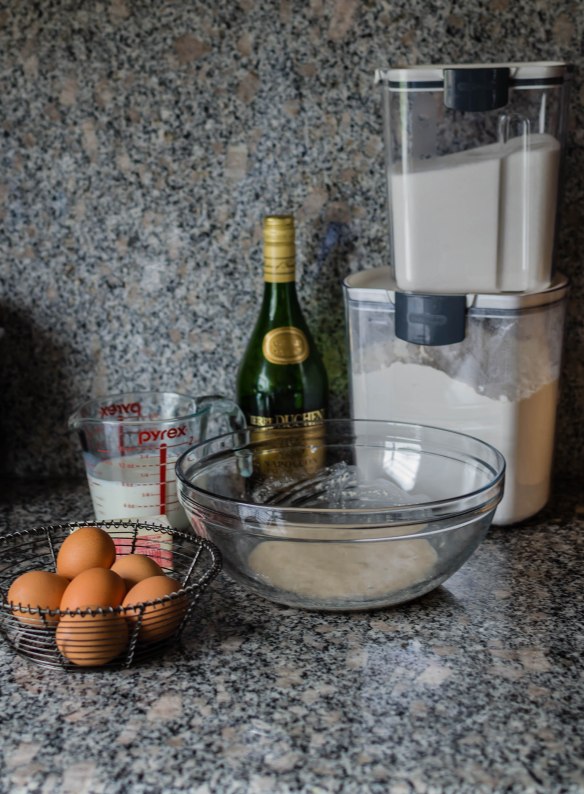 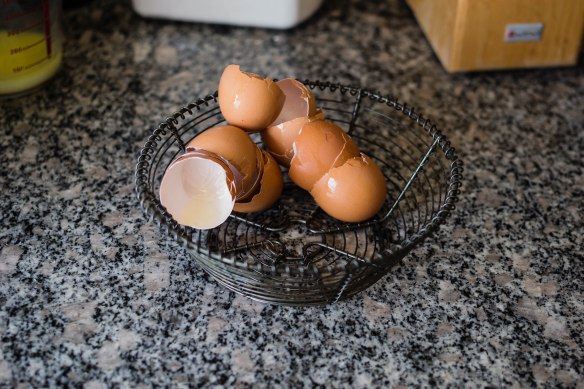 My favorite detail about this bread is that it was frequently baked on Good Friday, then taken to church on Holy Saturday to be blessed by the priest before it was eaten on Easter. I’ve seen some speculation this may have been due to its pre-Christian origins – a bread that is originally made to celebrate the coming of spring, covered in dough-shaped symbols of fertility, might need a little shepherding back into the Christian fold (all puns intended). Korena in the Kitchen, my main recipe source, includes some other fascinating traditions surrounding this bread in her post about it. 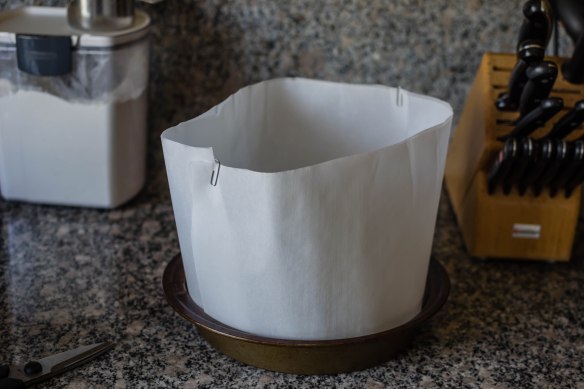 Since part of spring celebrations – Christian and otherwise – involve acknowledging return to life and freedom from fasts brought on by the scarcity of winter or the restrictions of Lent, this bread is about abundance. Not only is it a sweet dough that requires plenty of rising time; it traditionally makes a huge quantity. The “Ur” recipe that seems to be floating around out in the internet world – at least what many of the sites I looked at seem to use or match up with – involves a staggering 12 cups of flour, 3 whole eggs and 8 egg yolks, an entire stick of butter and equal amount of vegetable oil, oh, and ANOTHER egg (at least!) to glaze the top. Marie Porter, in her bread-fueled reminiscence of childhood Easters, basically fills every loaf pan in her kitchen trying to contain it all. 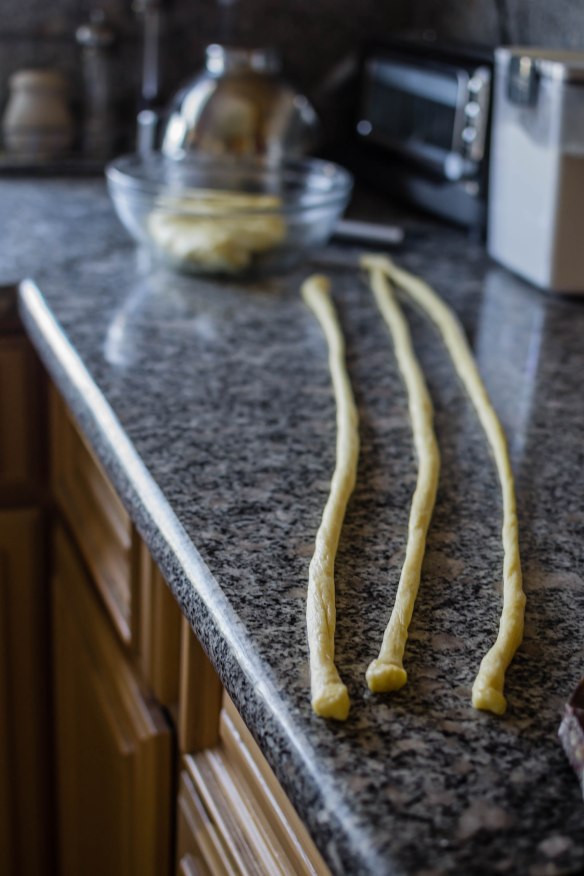 I elected to halve the recipe. This is of course not simple when dealing with odd numbers of eggs, so I polled the cooks in my family and R., of course, had the answer: “Just beat up the whole eggs, measure out half, and have a scramble for lunch with the other half.” Works for me. I’ve included measurements below. 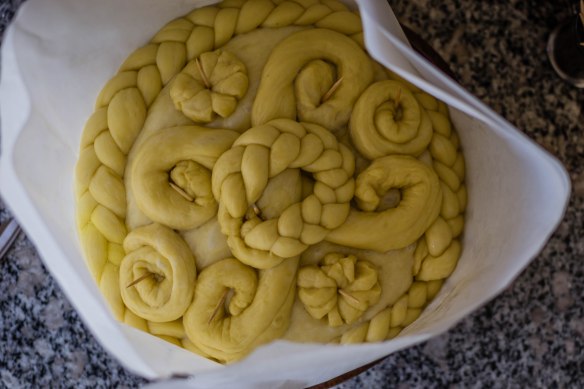 To achieve the traditional look, a paska should have tall, straight sides, with all the decoration crowded in on the top. If you have a tall-sided cake pan, use that. If not, as you can see in my photos, you can construct a collar out of parchment paper – be sure it’s long enough to wrap all the way around the inside of your baking pan plus a bit (I didn’t, which is why my loaf is a little wonky in shape), then fold it in half for a double layer. Remembering a similar move with souffles in an old Great British Baking Show episode, I tried fastening the edges of my parchment together with a paperclip. This was semi-successful, though it would have worked better if I’d followed my own advice here and used just one long sheet of parchment, not two. The dough is persistent, and it pushed its way through, creating gaps where my parchment connected. 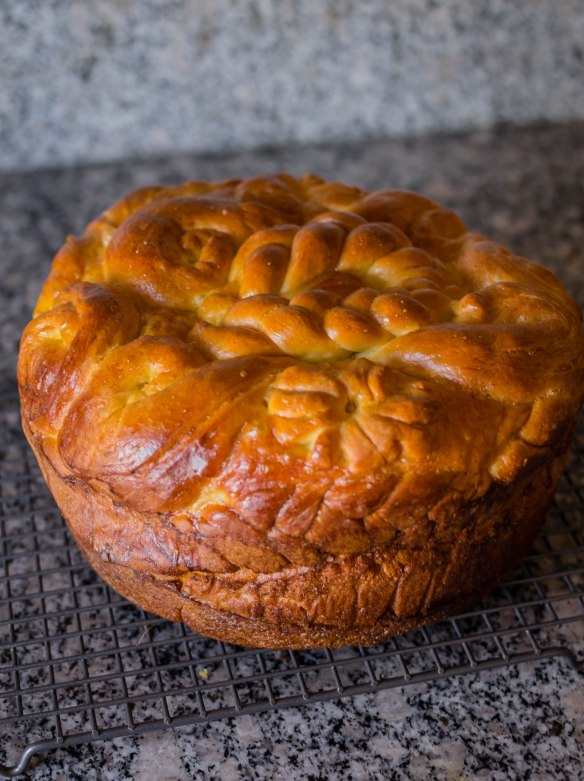 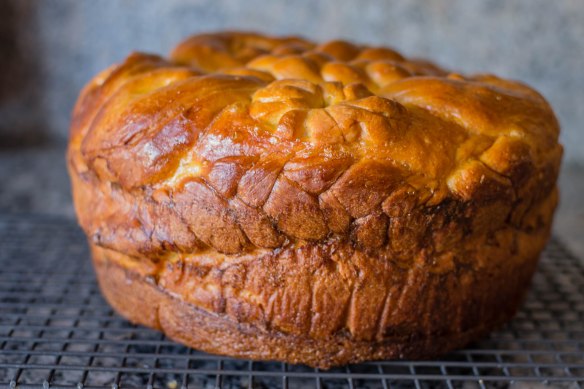 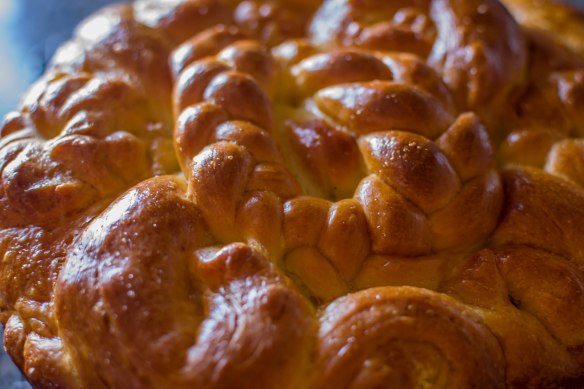 Most recipes recommend waiting until this loaf is completely cool before tearing into it, ahem, slicing out wedges. We couldn’t wait that long, and ate embarrassingly big pieces as an afternoon snack while it was still warm. And you know what? Even though that’s not traditional, I wouldn’t have had it any other way. Somewhere between cake and bread, lightly sweet and somehow not overly eggy, this probably won’t replace challah as my typical Easter bake, but it will certainly make a more-than-occasional-appearance. 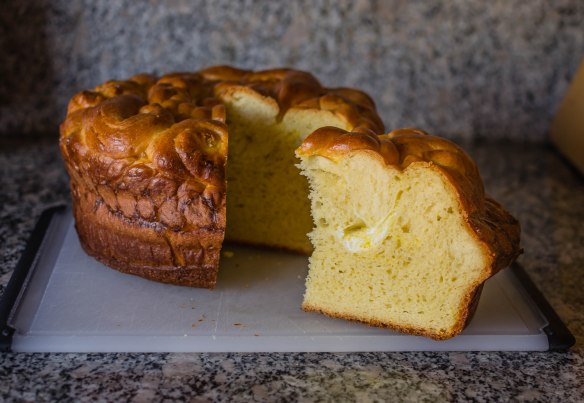 6 cups flour (you may use less) – I combined all-purpose and bread flour: about 3 cups of each

1½ whole eggs (¼ cup or 2 fluid ounces) (I agree this is annoying, but you can eat the other egg-and-a-half for lunch, right?)

Zest of ½ a lemon (optional)

Zest of ½ an orange (optional)

4 tablespoons (¼ cup) butter, melted + more to grease the pan, if you want to use butter

1 egg, separated, for decorations and glazing

8 thoughts on “Breads of the World: Paska”